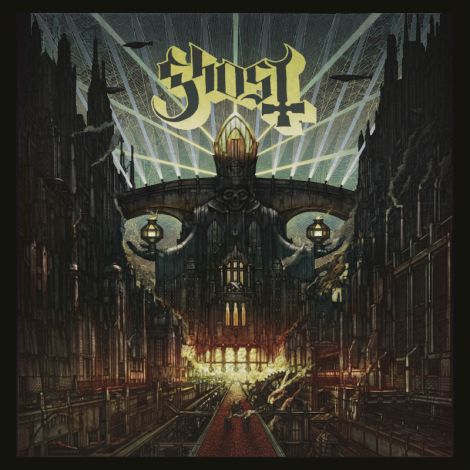 Kurt Loder: Are you familiar with the PMRC in the States – the group of Washington wives who want ratings for pop records?

Paul McCartney: Oh, the lyrics thing. Uh… I kind of see their point, you know?… Let’s say a really great group emerged – and you tend to think they’d be heavy metal, although that’s probably “heavy metallist” to say [laughs] – and say they were advocating, I don’t know, killing, Satanism. And they came out with a really great album and turned a lot of people on to Satanism. There’s got to be a point where you’re gonna say, “Look, guys, we’re all for artistic freedom, but maybe we just don’t want de debbil trampling across America at the moment.” I mean, what would you do? I don’t know.

Back in 1986 when moral questions were a cinch and McCartney expressed that sentiment, the image of Satan in popular music was indubitable: He was a class-A prick. The Antichrist was unalloyed malevolence, a master of slicing implements who decorated his lair with garlands of human entrails and oversaw his abyss of torment, which really is a full-time job. Bands that pretended, or were thought, to espouse Satanic thought (Slayer before Reign In Blood) jumped on the viscera train, as such angles were also, coincidentally, effective in describing the evil that men do.

Even actual Christians will tell you that’s not really how Satan works. He’s a seducer, an “angel of light” according to Paul’s second letter to the Corinthians. He’s not the unseen creep that throws now-unemployable nannies out of windows á la The Omen. He’s more of a broker, like in Rosemary’s Baby. His platform includes the consummation of all human knowledge and top-notch hedonism, plus the occasional refutation of hypocritically pious movements calling for the murder of alleged heretics or racial segregation. The Church of Satan, America’s longest-running satire, has gotten the most of this tragic comedy and invented some wonderful cocktail recipes in the process.

When Ghost first rumbled out of Sweden in 2010, literally cloaked in anonymity and fronted by the anti-papal Papa Emeritus, they combined tumultuous metal riffs with unconcealed Satanic veneration. But Papa was the unexpected wild card in that he didn’t sing with the throaty abandon of Morbid Angel’s David Vincent or Death’s Chuck Schuldiner. Rather, he sounded a lot like the guy who sang America’s “Sister Golden Hair”: clear, unaffected, serene. On Ghost’s first two albums, Opus Eponymous and Infestissumam, hearing Papa Emeritus I & II (they’re almost certainly the same guy) deliver exaltations to the Archfiend in a nearly crystal, granola voice was nicely dichotomous. There’s something sinister and jocular about a John Denver type singing “666 / Evoke the king of hell / Strike the death knell” over thick metal guitar.

The first two Ghost albums shared one key attribute with more traditional black metal: the employment of Satanism as a surrogate for power. But Meliora, with a third Papa in tow (same guy again), presupposes the more philanthropic stance of leaning on the shoulder of the Prince of Darkness for comfort. As such the musical premises start out in metal mode, but develop a more personal, problem-solving stance—straight to the heart of the Ellen demo. The brilliant music video for “Cirice” spells out this new strategy. A lonely preteen girl with goth presentiments is deeply moved by a junior Papa at a talent show, while shocked polite society retches in repulsion before getting smote by karma. Ghost isn’t trying to cash in on potential adherents’ puerile fascination with the Devil, and that’s what might be really scary to some. In a lyric as indirectly compassionate as “(Don’t Fear) The Reaper,” Papa III aims to heal: “I know your soul is not tainted / Even though you’ve been told so… / I can feel the thunder that’s breaking in your heart / I can see through the scars inside you.” The guitars of the Unnamed Ghouls drop out and descend into a mellifluous piano-ballad segment, greasing the Catherine wheel even more.

Allegedly produced by Swedish pop master Klas Åhlund of Robyn, Britney and Katy fame—Ghost’s secretive and playful mythology is the only reason I have doubts—Meliora is publicly dangerous because it’s so populist and beautiful. “He Is,” more ABBA-esque than metal, turns the Christian devotional on its head. Again it starts in personal territory: “Two star-crossed lovers reaching out / To the beast with many names.” Then the chorus unifies the intangibles and consecrates the relationship in the blood of… well, just blood: “He’s the shining in the light without whom I cannot see / And he is insurrection, he is spite / He’s the force that made me be.” With pianos reminiscent of the E Street Band’s Roy Bittan and twin Allman guitars, “He Is” confiscates the tools of classic rock from the stubbly devout and uses them for—honestly, it’s hard to say “evil.” Let’s say “the alternate viewpoint.”

But Ghost doesn’t just take your wedding photos on Meliora; they have an eye towards self-empowerment in general. “Spirit” and “From the Pinnacle to the Pit” pull from the Judas Priest playbook to suggest some of the more reasonable Crowley-isms: “Throw yourself into the vessel of possibilities,” “Wear your independence like a crown.” This is taking the issue out of the unrelatable, fiery Hades and straight to the living room to question free will. Later on Ghost gets even more into modern-day applications and the clumsy fakery of human virtue. “Majesty” uses an Angus Young riff to bemoan “pathetic humans in despair,” and the breathtaking “Absolution” goes through bouts with Metallica, Priest, Skynyrd and even Abacab-era Genesis in support of its radiantly mocking chorus: “All those things that you desire / You will find them there in the fire.”

Those of you with unresolved issues with religion and the prospective existence of a thwarting influence with cloven hooves might be profoundly disturbed by Meliora, even more than the gaudily decorated first two albums. Ghost are McCartney’s ’86 vision in blasphemous robes. They’re complete musicians who understand pop composition as well as heavy riffs, their albums all sound good and Meliora’s their best. Although heathens like myself might be more amused than persuaded, its presence and the quandaries it raises about art and perceived morality are fun to consider. Is its high concept justified, though? Is it an enduring work, or will it be hamstrung by its precepts? And will Ghost maintain the kind of representative love they get from a metal community that bends its rules for Rush and Blue Öyster Cult? Hard to say. Maybe just sitting back and dreaming about the potential chaos Ghost’s seductive, explicit-language-free apostasy might create will be its own reward. At worst it’s just a very clever restatement of a one-joke idea. At best, well, it’s a little slice of heaven.

Purson – The Circle and the Blue Door