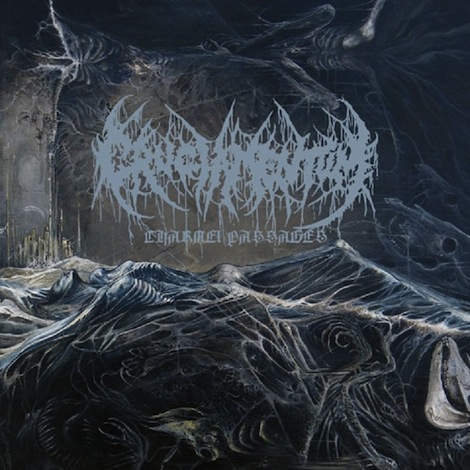 Cruciamentum, translated from Latin, means torment. It’s a fitting name for a death metal band that exists somewhere between the brutal blasts of old-school death metal and a more complex, exploratory update of the old-school ugliness of Entombed and Morbid Angel. It evokes a slow, particularly cruel kind of treatment—something as much tied to psychological distress as physical harm. It’s also the name of the test that Buffy Summers has to endure for her 18th birthday, forced to fight a burly vampire while sapped of her powers under the rule of the Watchers’ Council. It’s unlikely that UK death metal band Cruciamentum took their name from Joss Whedon lore, but it’s a fitting one all the same for a group whose strengths come from their ability to draw their compositions out, and distribute harshness at a tempered pace rather than an escape-from-axe-murderer sprint.

Though they certainly pack a wallop, and at a blast-beat clip at that, Cruciamentum progress in careful movements. After three EP releases over the last decade—starting with the well-received 2009 cassette Convocation of Crawling Chaos—the British death metallers have finally offered up their full-length debut, Charnel Passages, and it’s a curiously compelling mixture of galloping gore and gothic doom ethereality. And though it’s true that can be said of a lot of death metal albums, particularly after around 30 years of evolving into much more versatile shapes and textures, Cruciamentum’s own take is more about a persistent and foreboding darkness, rather than a machine-gun-fire pummel to the gut.

They do pummel remarkably well, however. Charnel Passages highlight “Tongues of Nightshade” is a merciless exercise in physical endurance—both for the band and the listener. But that initial assault is, to some degree, just a gateway toward greater complexities in descending doom riffs and tortured grooves. “Rites to the Abduction of Essence” is slow, churning evil majesty in the vein of Celtic Frost, whereas “Piety Carved from Flesh” is tremolo-riff transcendence and “Collapse” pairs darkness and horror with ethereality in ways that few death metal bands pull off so successfully.

Charnel Passages is an interesting contradiction in that it’s both a full-frontal assault and an album that rewards patience. The bruisers behind Cruciamentum aren’t interested in delivering any climax too early, or granting any sort of instant gratification. This is a slow churn—a strangely satisfying torment, if you will—that very often leads to moments of wonder, or in the final minute of “Collapse,” genuine beauty. Charnel Passages is the kind of death metal album that more bands should aspire to create, yet few have the attention span to do properly.