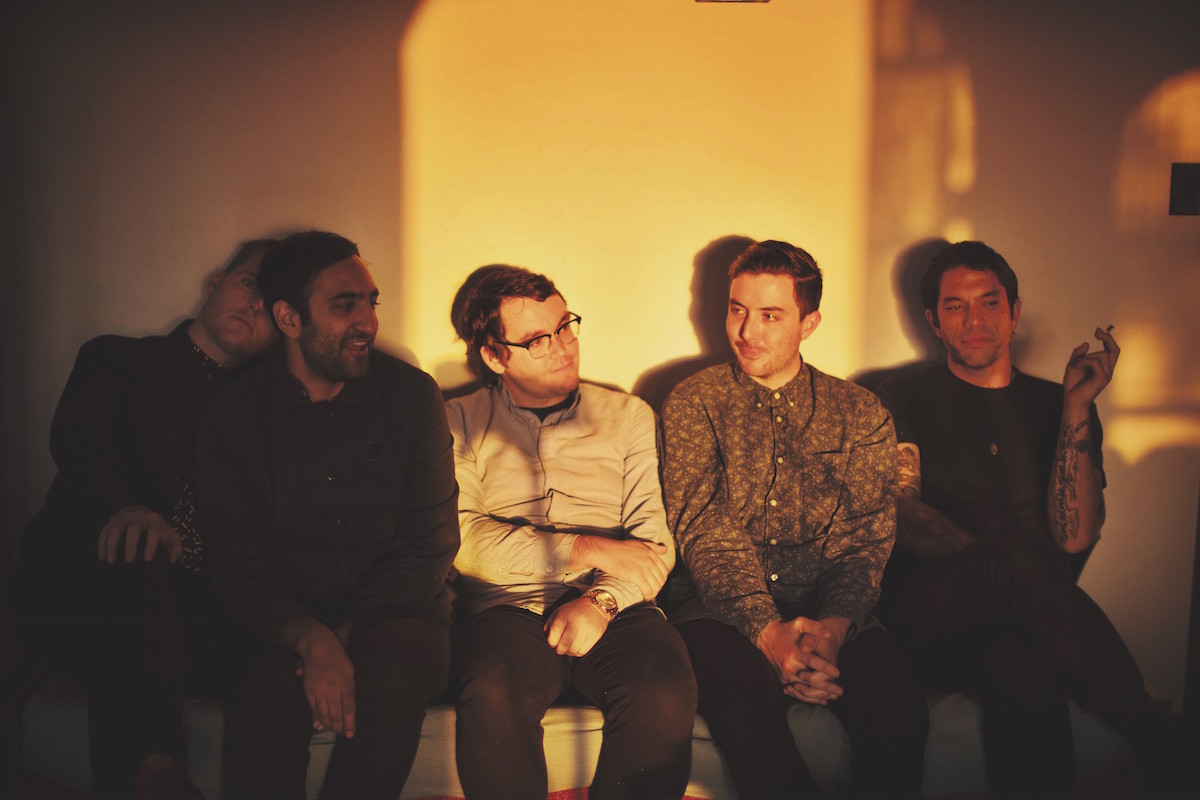 An odd thing happens when a relatively obscure artist is put under the spotlight. Out of the blue, every decision a musician makes—musical or otherwise—becomes part of an all-inclusive narrative. The more attention a band receives, the more weight each aesthetic decision seems to carry.

This effect only multiplies when an artist comes from the often insular world of extreme music, like black metal genre-benders Deafheaven do. It’s not often that a band so dark and heavy is showered with acclaim by both Pitchfork and Rolling Stone. But that’s exactly where Deafheaven found themselves after their sophomore effort Sunbather landed as one of the most critically acclaimed records of 2013—including here—thanks to its mellifluous mixture of beautiful textures and metal’s raw power. Their unique blend was almost unanimously embraced by crossover audiences, but received a polarized response from those deeply embedded in the metal underground.

“I’ll be completely frank, it was really strange,” vocalist/lyricist George Clarke recalls in a phone interview. “We worked hard on it but you can’t really expect a response like that.”

The success of Sunbather changed the band’s life. Though the hardships of touring had once cut Deafheaven down to a creative duo of Clarke and guitarist Kerry McCoy, they were again a fully operational five-piece. They toured the world and wrote together as quintet, and also had a greater understanding of where they stood, musically, and how high they could set their ambitions.

Before their breakthrough, Clarke had been living with his girlfriend and a handful of friends, sleeping on the floor in a one-bedroom apartment in San Francisco. But with the city’s cost of living growing more and more expensive and a handful of friendships and business connections brewing in Los Angeles, he made the move down south. Living in a comfortable home with his partner, a dog and stable income, Clarke felt like an adult for the first time. He finally had a life he’d been dreaming of. (Note: The applicable irony of Sunbather opener “Dreamhouse” doesn’t escape me.)

These changes—the new home, the new city, the new life—came for Clarke at the same time as Deafheaven’s amped up touring schedule and press cycle in support of Sunbather, and it wasn’t long before he started feeling like he was living a double life. “I found it difficult, at first, to reconcile both of those lifestyles and all of the emotions that kind of get intertwined with living that life,” he says. That difficulty turned to frustration, which led to depression. “I found the whole thing to be suffocating and I felt like I couldn’t escape.”

It’s from that emotional standoff—the crossroads between success and depression—that Clarke’s writing and performance on Deafheaven’s third LP was born. Whereas Sunbather found Clarke daydreaming about dream houses and escaping a difficult youth, New Bermuda (the band’s first for Anti), in his words, “is much more about reality and the much more mundane aspects of adulthood.” It’s a record that juxtaposes brutal, triumphant thrash with crushing moments of defeat and misery, and serves as a perfect platform for Clarke’s surrealist poetry to reach new heights.

Clarke contributes the most consistently harsh element to Deafheaven’s music in the form of his crushing hiss. While part of the band’s signature sound comes from its instrumental flexibility—easily transitioning from crushing blast-beats to beautiful passages that sound as if they belonged on a Sigur Rós record—Clarke’s unwavering black metal croak is just as crucial to the formula’s success. His presence is often that of a poetic goblin, adding an element of dark intrigue to even the most delicate of compositions.

Part of what makes Clarke such a pivotal and polarizing figure in the metal world is his ability to deliver intimate, introspective lines with a driving ferocity and the five tracks on New Bermuda are a case study in that careful balance between brutality and sentimentality. A track like “Luna” kicks off with one of the band’s most pummelling riffs to date, but narrates Clarke’s experience feeling alienated in his new home city: “That’s just about sitting in my house and thinking about how I was so excited to live in Los Angeles, and now I just absolutely hate it.”

New Bermuda’s instrumentals have also shifted a recognizable degree away from the long, shoegaze-leaning exploits on Sunbather. The band digs back through their roots to rediscover classic albums by acts like Slayer, Metallica, Low, Wilco and Red House Painters, and yearning for a more riff-driven sound than the more ethereal guitar work they had focused on before. As the band began to write the new tracks, the heavier, black metal moments became a bit more thrash-inspired, while the quieter moments began to lean closer to slowcore and ‘90s indie rock than shoegaze. And while it’s easy to construct the narrative that Deafheaven worked hard to prove to the more kvlt-minded in the extreme music community that they are truly a metal band, Clarke presents the changes as a much more natural transition.

“People were calling us the originator of this sound, the melding of [black metal and shoegaze]—which I never believed,” Clarke explains. “We’re influenced by a lot of bands who were mixing metal and shoegaze influence beforehand… So I think that we kind of subconsciously drifted from that a bit on this record.

“It’s just tighter,” he continues. “We wanted a record that was a bit more concise and not so dreamy; but not changing the band we are, because we’re always going to to sound the way we sound.”

To craft the sound on New Bermuda, Deafheaven returned to Atomic Garden to work with Jack Shirley, who produced Sunbather, as well as the band’s excellent debut Roads to Judah. While the band certainly had an opportunity to enter the studio with some iconic names in the industry, they ultimately decided to return to where they feel the most comfortable experimenting and working together. Clarke says that the band feared a ‘big name’ would have led to unnecessary pressure shadowing over the band’s work environment. But “with Jack, none of that exists. It’s just like working with your friend—your friend who’s a very good sound engineer.”

Their decision to stay with Shirley also reflects a sense of respect and loyalty Deafheaven seem to hold dear. They’ve endured tough times as a band—from being a young, hungry metal act to adjusting to a new life and polarized reception from the metal world they come from. “If you really want it, you figure out a way to get out of it,” Clarke says. “You keep climbing and you work hard and you take on opportunity and you appreciate what’s given to you.”

Clarke has some thoughts on that polarized reception and the overarching narrative surrounding Deafheaven’s success, too.

“If they want the metal band and you’re that metal band, and you’re afraid of what people will think because of that—don’t [be afraid],” he says, in reference to the band’s heightened presence in non-metal media and festivals. “There is such a broad world out there filled with so many good people… Don’t be afraid to say yes.

“And once you say yes, work hard.”