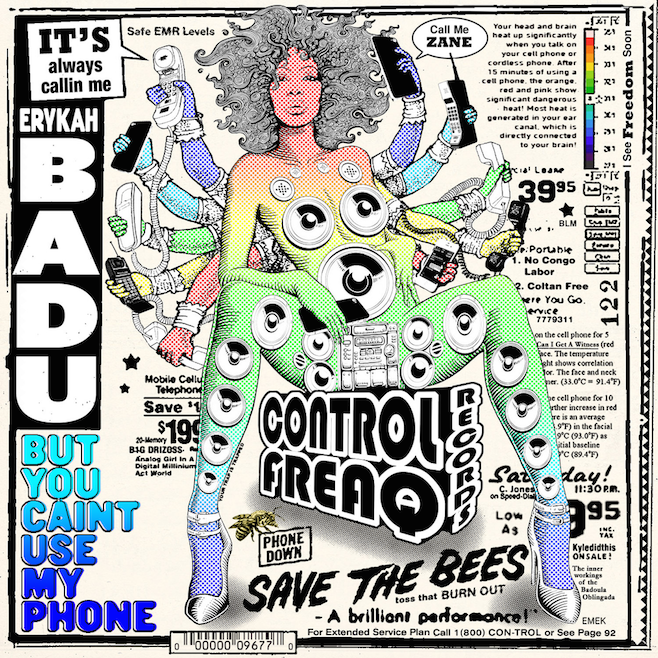 Erykah Badu is releasing a new mixtape titled But You Caint Use My Phone. This is her first new set of music since 2010’s New Amerykah Part 2: Return of the Ankh, and today, the full details of the mixtape have been revealed. It’s being released this Friday, November 27, via iTunes/Apple Music, and then will hit other digital outlets on December 4. That’s the artwork for the mixtape above.

Here’s some info about the mixtape from  a press release:

The mixtape expertly weaves Erykah Badu’s trademark soulful vocals with psychedelic soundscapes, hip-hop-inflected beats, smooth R&B, jazz, art-rock and found sounds into a new genre Erykah describes as TRap & B. Badu and Witnessin dedicated a lot of time to precise mixing work, toying with EQs and other filters so that the sound’s frequency and vibration move in tandem to capture a feeling she refers to as “sympathetic vibration.” Badu also used a tuning fork and Tibetan singing bowls to fine-tune these details, with the goal of creating a sound that brings peace and tranquility to its listener. It is a sound that Badu herself referrers to as a “whole new frequency” for fans.

Listen to “Cell U Lar Device” below, which is Badu’s reworking of Drake’s “Hotline Bling”.

Erykah Badu But You Caint Use My Phone tracklist: