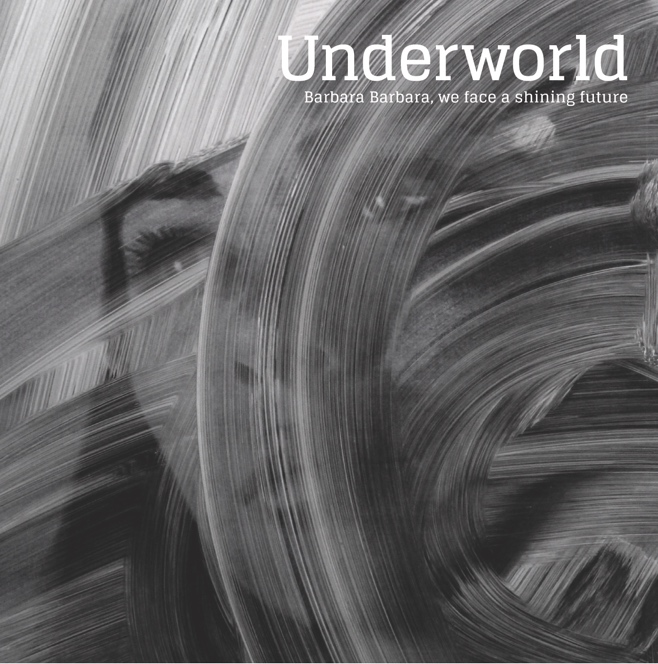 After almost 35 years slogging through the music business, some artists might deserve the benefit of the doubt against a perceived slight or shortcut committed to tape. I’m sure lesser musicians would be pilloried for daring to record a refrain consisting of nothing more than “Blah blah, blah blah blah, blah, blah blah blah blah.” Partially submerged in the bubbling digital stream of “I Exhale”—the first track and single from Barbara Barbara, we face a shining future—that line is concrete evidence of Underworld’s Karl Hyde and Rick Smith making an album with big smiles on their faces.

The British electronica duo’s ninth proper LP comes after a six-year break, their longest between albums. They’ve been busy in the interim with solo projects, collaborations, soundtracks, even the Summer Olympics. Yet at seven songs and just under 45 minutes, Barbara Barbara is Underworld’s shortest studio album since their long-lost synthpop days on Sire Records. Still, it’s jam-packed with the familiarity of long passages of big-beat stomp and Hyde’s random poetics, alongside some newer ideas and sound sources.

There’s no instruction manual for this album, but listeners new and old must give Barbara Barbara a chance through repeated plays. It’s really the first two tracks that risk turning them away, as Hyde’s delivery there very eerily suggests that of Mark E. Smith, and the constant instrumental push that of Smith’s band The Fall. They’re acquired tastes to be sure, so while groove and melody protect “I Exhale,” it’s a little exhausting to try to make it through “If Nah” right behind it. It doesn’t help that Hyde’s “lunar lunar lunar” lyric feels like a lazy callback to “lager lager lager” from the career-defining “Born Slippy .NUXX.”

Thankfully, the rest of Barbara Barbara opens up like a flower at dawn, with the pairing of “Santiago Cuatro” and “Motorhome” offering the biggest surprises. “Motorhome” is an insistent anthem of positivity, Hyde quietly repeating common sense: “If it don’t lift you, if it drags you down, keep away from the dark side.” Through squiggly synth noise and some downright shocking acoustic guitar picking, both of these cuts include heretofore untouched Latin, Middle Eastern and Indian influences. Elsewhere, “Ova Nova” embraces Balearic hum and throb, while the textures of “Low Burn” are knitted together like a favorite sweater.

Even with tracks suggesting ecstasy (in feeling and pill form) and made with party-propelling power, Underworld albums regularly felt steeped in drama and constructed with countless dark corners to explore. Yet for all of the hints here of critically lauded favorites like Second Toughest in the Infants and Beaucoup Fish, this LP is self-effacing, self-deprecating, and self-aware without being self-conscious or selfish. Barbara Barbara, we face a shining future is the first Underworld release in recent memory clearly recorded with measurable joy. Blah blah blah, la la la, ha ha ha.

Brian Eno – Drums Between the Bells

The Chemical Brothers – Push the Button