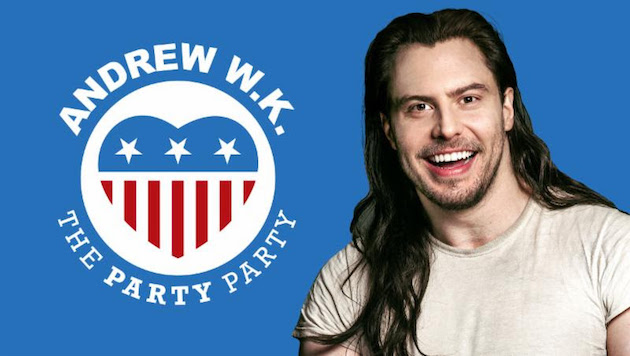 Andrew W.K. is making a political statement during this election season by forming his own political party: The Party Party. In what could end up being an elaborate April Fool’s joke (tomorrow is April 1, after all), W.K. has launched a website with his party’s platform, which “aims to provide an alternative to the divisive labeling of our current system.” But knowing how earnest Andrew is about partying, there’s no reason not to take him seriously. He’s also released a video to announce the launch of his political movement, featuring interviews with people, and at least one highly compelling argument about his mission: “Buried deep inside this mountain of overwhelming national anxieties, complex international dilemmas, and endlessly competing principals, there is a fundamental truth — that we are all in this together.”

It’s hard not to find that a little inspiring, even if Andrew, himself, is unlikely to run for president. There’s also an online petition to officially “qualify” the Party Party as a political party.

Tool, Baroness, Quicksand to play Rock on the Range 2018