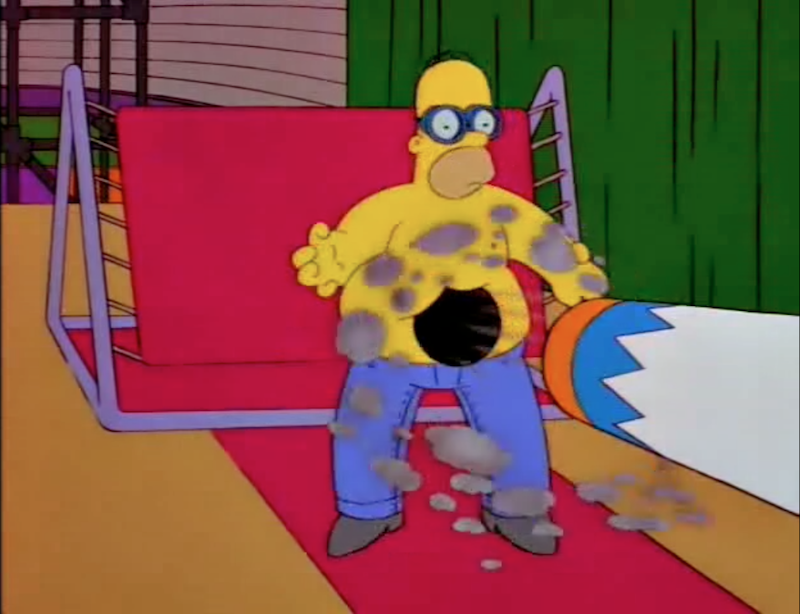 When Marge Simpson asks this question, exasperatedly, at the end of “Homerpalooza”—the penultimate episode of the series’ seventh season—she’s just spent the better part of the half-hour watching her husband, doofus and unlikely hero Homer, literally risk his life to achieve that most intangible of goals. But the episode never bothers to seek an answer to that question. It’s too weighty and unwieldy a question and, frankly, one that sort of can’t be answered. If something is cool, is it because someone deems it so? Or is coolness an inherent quality, regardless of who recognizes it?

One surefire way to backdoor your way into cool, however, is to piggyback on what’s already cool. Twenty years ago in May, The Simpsons seized on alternative culture by inviting a number of Lollapalooza-headliner guests to make cameo appearances (much in the same way the show has attracted countless big-name guests over the years) as Homer Simpson fell ass-backwards (or gut-forwards, more literally) into hipness. Smashing Pumpkins, Cypress Hill, Sonic Youth and—in a cheeky nod to a cottage industry of revitalizing the careers of old-timers a la Rick Rubin—Peter Frampton. And it’s hard not to get a particular kick out of hearing them deliver some of the episode’s best one liners: Jimmy Chamberlin saying he’s going to buy a walk-in humidor; Peter Frampton imploring Sonic Youth to stay out of his cooler; Thurston Moore scoffing, “c’mon Mr. Frampton, you’re not going to eat all that watermelon.” But the appearance of what were, at-the-time, cutting edge artists with youth appeal are simply a dramatic device to reflect a spotlight onto the bigger, more painful truth: Nobody stays cool forever. 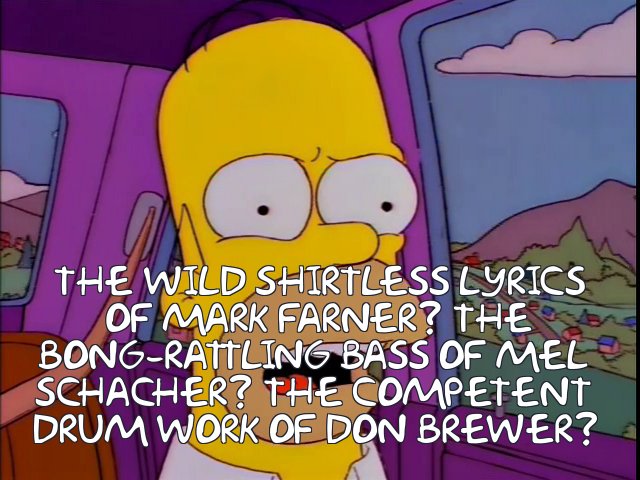 In fact, that’s almost literally said out loud by Grandpa Simpson, who warns a teenage Homer, “I used to be with it, but then they changed what ‘it’ was. Now what I’m with isn’t ‘it,’ and ‘it’ seems weird and scary to me—It’ll happen to you!” Homer, however, wants to keep on rocking forever (forever, forever), much to the embarrassment of Bart and Lisa. Homer is hilariously embarrassing in his attempts to bond with his kids over rock ‘n’ roll, mansplaining six degrees of Jefferson Airplane and expressing utter bewilderment that they don’t know who Grand Funk Railroad.

The harder Homer tries to prove his cred to Bart and Lisa, the more they push back. “We wouldn’t par-tay with you if you were the last dad on earth,” Bart says in a mixture of devastation and hilarity that only The Simpsons in its prime could pull off. So Homer does what any desperate dad in search of offspring approval would do: He takes them to the Hullabalooza festival, where he finds himself more publicly and aggressively outed as a “narc” by the gen-Xers at the fest. Despondent, he slinks off in shame, only to be accidentally pummeled in the gut by an inflatable pig that comes hurtling toward his gut like a cannonball. And in that instant, Homer unwittingly goes from affable loser to superstar weirdo, in the vein of the freaks in the ’90s-era Jim Rose Sideshow Circus. He’s the Man With the Iron Stomach, or “that cannonball guy,” as one jaded Gen-X cynic sneers. 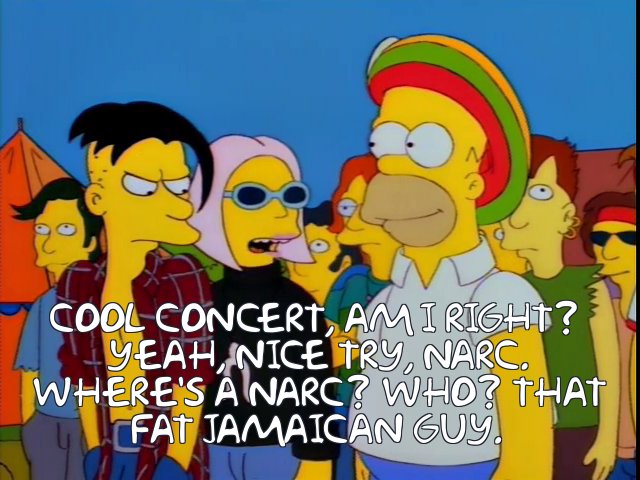 Here’s the thing, though: Homer isn’t cool. His weird talent of being able to take a cannonball to the gut is just a peculiar side effect of his gastronomic rapacity (which knows no satiety). Homer didn’t somehow stop being obsessive about the dinosaur rock that makes his kids cringe, and to the contrary of his own memories of trying to make friends with blacklight-van-driving hipsters in the ’70s, he was never cool. Nor, likely, was Abraham Simpson. In fact, despite his appearance at Hullabalooza, it’s a stretch to say in 1996 that Peter Frampton was cool. Just a few years prior in Wayne’s World, a whole series of punchlines surrounded his double-live opus. But Homer, at least briefly, earns Bart’s admiration by accident. In other words, he pulled a Homer. But it’s only temporary: Being hit with cannonballs actually does cause physical damage to his stomach, and if he doesn’t stop, he’ll die. He’s left with no choice, even if in his faux-cool he suggests, “dyin’ would be a stoooooone groove.”

Twenty years after its airing (paired with a similarly themed episode, “Summer of 4 Ft. 2”) “Homerpalooza” remains a favorite of fans if for no better reason than that of any classic Simpsons episode: It’s funny. The one liners come at a pretty dizzying clip (as with most of the show’s best episodes) and Generation X cynicism gets a good skewering (“Are you being sarcastic, dude?” “I don’t even know anymore”). But the heart of the episode is one that should be accessible to both the cool kids and the freaks alike. Homer didn’t really have to take cannonballs to the gut to earn Bart’s admiration, and despite what looked like a heroic act, Homer never really changed. Bart just saw him in a different light. But even at the music festival, Bart mocks the teenagers who sway in a trance to Smashing Pumpkins’ music. He doesn’t like his dad’s dinosaur rock, but he’s not interested in the approval of the slackers around him either. You can see how Marge would grow frustrated at trying to figure out what’s cool, but ultimately Bart and Homer have to be themselves, and everyone’s much happier in the end.

When “Homerpalooza” aired, I was 14, far more Bart than Homer, and essentially in the demographic that the show’s Hullabalooza would have been aimed at. It’d be a while before I got into Sonic Youth, but just days before it aired—during an eighth grade east coast trip—I actually bought the Smashing Pumpkins Zero EP, featuring six b-sides, including the half-hour long “Pastichio Medley.” You could say I was a fan. I watched the episode in a hotel room in Boston with several of my classmates, and though I’m not sure I appreciated the greater “nothing gold can stay” message at the time, the meeting of Simpsons plus Corgan made it a can’t-miss. Plus jokes about Cypress Hill and weed never go out of style. 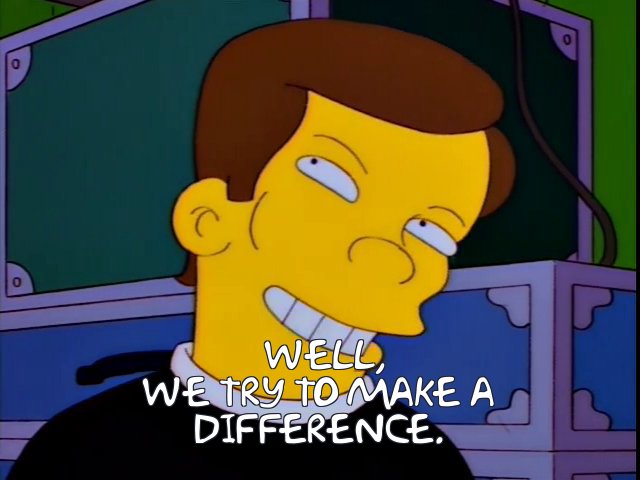 In an interesting parallel to the overarching idea of the temporary nature of coolness, the other album I bought on that trip was Rage Against the Machine’s Evil Empire. They weren’t necessarily a new band at that stage, but as a precursor to the explosion of nu-metal, they ended up pointing more toward the direction that alt-rock would go in the ensuing years, and even played select dates on that year’s Lollapalooza, which was headlined by Metallica, oddly enough. And by the time “Homerpalooza” made it to air, the Mellon Collie and the Infinite Sadness cycle for the Pumpkins was waning, while bands such as No Doubt (who more or less remained popular) and The Verve Pipe (who didn’t) were dominating alt-rock radio. Naturally, some of the pop culture jokes on the episode now seem terribly dated. When Homer argues with a record store clerk about the Us Festival, organized by Apple co-founder Steve Wozniak, the clerk scoffs, “What computers?” That clerk almost certainly has an iPhone now. While unintentional, that now-obsolete joke only further proves the point of the ephemerality of being cool.

Now that I’m much closer in age to Homer (sigh…), I don’t necessarily feel as forlorn about popular culture passing me by as he does. I write about it, so I’d be kind of failing at my job if I didn’t keep up to some degree. That doesn’t mean I don’t have my share of “get off my lawn” moments. More accurately, I’d probably say that now, in my thirties, I’m half Bart and half Grandpa, spending most of my time listening to contemporary music and shaking my head at what the kids are into (Twentyone Pilots? I mean, really?). But that’s just it. At some point in all of our lives, we will be Bart, Homer and Grandpa. Sometimes concurrently. It’s the nature of cool. A precious few can hold on to it, often without the appearance of putting any effort into it (Tom Waits, David Byrne, Brian Eno). For many of us, it’s fleeting at best. Sometimes we can get it back, and sometimes we can hold onto it longer than most. But it’s not like it’s worth getting repeatedly pummeled with cannonballs to do so.