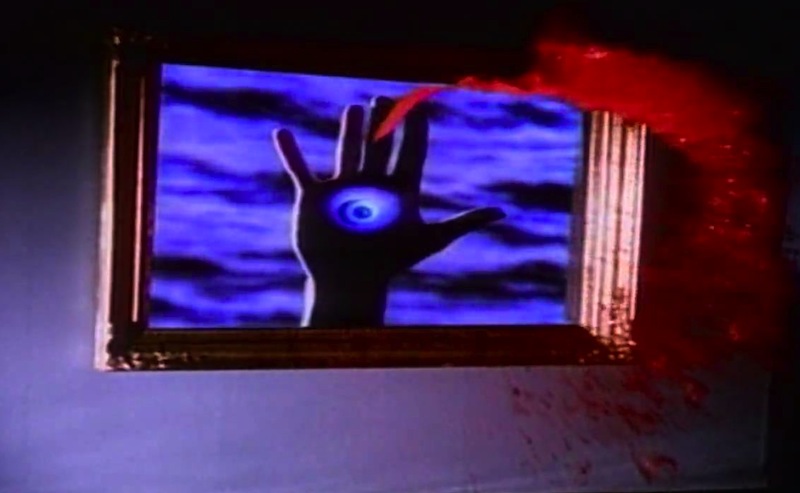 The mixture of rap and rock music is one with more than its share of disastrous results. That rap-rock is essentially a stand-in phrase for most nu-metal, or 311, would be enough to dissuade anyone from hybridizing the two genres. But while the execution is often poor, the idea itself isn’t necessarily a bad one. With members of Rage Against the Machine and Public Enemy giving it the old post-grad try with Prophets of Rage, it got us thinking about the times that it did work, and each of those groups had their share of successful moments throughout their catalog. But looking back even further, plenty of Golden Age emcees spit verses over big guitar riffs, so by the time some goateed suburbanites got their hands on it, the idea wasn’t so novel. Still, hip-hop and rock go together great, as some recent late-night collaborations have reminded us (Run the Jewels/TV on the Radio and Parquet Courts/Bun B). So we dug back through the archives to line up some of the best rap-rock hybrids of the past 30 years.

I’m sorry, were you expecting “Walk This Way”? Yes, that song absolutely was a rap/rock hybrid by default, a popular and groundbreaking pairing of Hollis’ favorite sons with Aerosmith, but it was a novelty cover of a much better original. (Same goes for “Bring the Noise.” Wax is not for Anthrax.) Two years and two albums prior to “Walk This Way,” “Rock Box” had cracked MTV’s pop and rock roster by recalling how the earliest MCs had rhymed over funk and disco records, only updating the formula with live guitar licks from session musician Eddie Martinez. Then came King of Rock and its title track, containing more memorable riffs and—for an album and, let’s face it, a genre committed to defining identity—one of rap’s purest manifestations of lyric as ego. Jam Master Jay’s “solo” is a few bars of dry drum machine, while Run and DMC’s emphasis is merely yelling into the dubbed-out abyss on the 4s—all made believable through sheer force of will. That’s the way it is, so stay the hell back. – AB 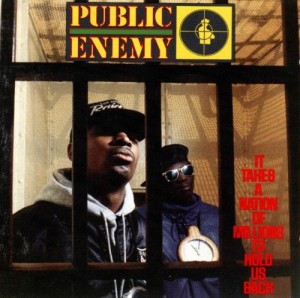 Public Enemy – “She Watch Channel Zero?!”
from It Takes a Nation of Millions to Hold Us Back (1988; Def Jam)

“She Watch Channel Zero?!” is an exhibit of Public Enemy’s punk audacity. Slayer was originally going to distribute Reign in Blood through Columbia but Columbia reneged because they were afraid “Angel of Death,” with lyrics referencing Nazi physician Josef Mengele, would garner backlash. “She Watch Channel Zero?!,” distributed through Columbia, is established around a sample of “Angel of Death” like a séance for a contract-mocking revenant. The sample itself cross-hatches Public Enemy’s sociopolitical anger with metal’s fractious aggression into an inescapable sound-hive of two genres more-than-a-few people thought were already too noisy on their own and created a music groups are still trying to catch up to. – BJ 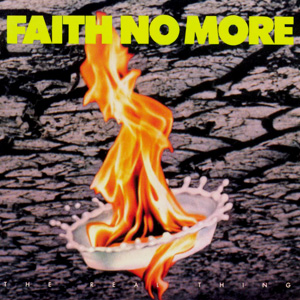 Faith No More was so compelling in the late ’80s and early ’90s because of Mike Patton’s chameleonic musical palate and the fact he and his band could pull off seemingly any type of music subgenre; in the case of “Epic” they made a prototype for all the lesser imitations they would span at the millennium’s end. Borrowing slightly from “We Will Rock You” and hooking listeners with the repeated refrain “What? Is? It?” the notorious video was as close to an MTV staple as the band got, even if this was a fish out of water compared to the rest of their oeuvre. – BR 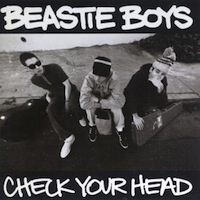 The natural choice for this spot seems like it should be “Sabotage,” since it was one of the Beasties’ biggest hits and, for that matter, prominently featured a one-chord guitar hook. But “Gratitude” is a better song (come at me), bearing a much funkier load and grooving in ways that Rage Against the Machine would later turn into much heavier fare. That said, “Sabotage” is maybe a better showcase for Ad Rock’s lyrical talents, though it’s hard to beat MCA’s dirty bass groove here, not to mention Money Mark’s soulful slab of Hammond organ at the end. It’s basically a funk-rock jam session with some lyrics thrown in, but it’s still rap-rock perfection. – JT

The early-to-mid-1990s were a fertile period for experimentation in movies and especially movie music. Quentin Tarantino set a new bar for cinematic atmosphere; rising black filmmakers scored their stories with hip-hop; modern rock and electronica found new outlets. So it’s really no surprise that a forgettable Emilio Estevez action flick begat a contrived yet still groundbreaking soundtrack joining rappers with alternative rock and metal acts. Some pairings resulted in work that felt like two separate songs stitched together (Helmet/House of Pain), some created laughable sample-based caricatures (Sonic Youth/Cypress Hill). Some seamless tracks worked (Run DMC/Living Colour) more than others (De La Soul/Teenage Fanclub). This loping deep cut (one of three collaborations not listed on the cover art), however, might be the album’s silent killer. The formula probably works best here because it’s a solo rapper fronting a full band. Del’s near-freestyle perfectly complements the whirling guitar psychedelia of J. Mascis and friends. – AB 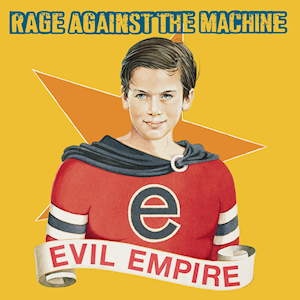 Rage Against the Machine – “Bulls on Parade”
from Evil Empire (1996; Epic)

Rage Against the Machine could’ve been the funkiest band of the ’90s, but they were furious. As a result, they picked up ably where Public Enemy fell off, Tom Morello being a one-man Bomb Squad with a wah-wah while Zach de la Rocha spit incendiary lyrics indicting America as the Evil Empire POCs for centuries knew it to be. “Bulls On Parade” was the opening salvo to prove the sophomore slump was just another thing to blow up like the status quo, and though the band had a shelf life, the joy of righteous anger this song provides to this day doesn’t. – BR 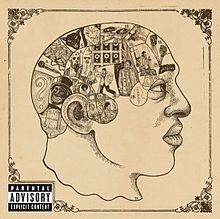 “The Seed” began its life as a lo-fi R&B-funk jam from up and comer Cody ChesnuTT, whose guitar-driven hooks nudged him closer to rock than most of his mainstream contemporaries. But when backed by the baddest band in hip-hop, the Legendary Roots Crew, ChesnuTT’s promiscuous parable about cross-breeding musical genres becomes a bigger, bolder and much funkier piece of music. Ironically, it’s the hip-hop group that makes the song rock harder, and rock it does. Not for nothing, Black Thought lays down a few verses as well, adding a contrast to ChesnuTT’s awkward Prince-in-translation, “I push my seed into her bush for life.” The absence of a thesaurus can be forgiven in this case; the song bumps too hard for the lyrics to matter that much. – JT 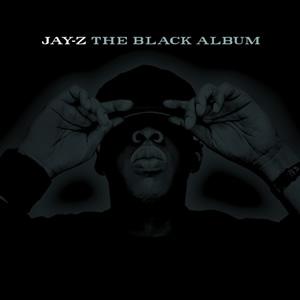 You crazy for this one Rick! But is he? In all honesty, backing a banging boom-bap with a beefy, distorted guitar is kind of Rick Rubin’s specialty. Sure, he did some Black Crowes records or whatever, but this—this—is his genuine talent. Jay Z’s 2003 hit (which more than a few yuksters redubbed “100 Problems” after Beyoncé’s Lemonade dropped earlier this year) finds Shawn Carter exasperated at all the aggressors trying to take him down against the best use of Billy Squier since, well, ever. It’s essentially a better produced take on the kind of guitar-rap jams that Run DMC dropped back in the ’80s, and remains four of Jay’s finest minutes. – JT 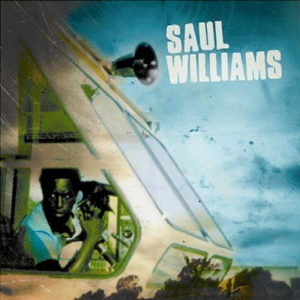 A hard-rocking tune built by Williams layer-by-layer without obvious guitar (hey, Arthur Brown did it with “Fire”), this delves into the same relentless third-eye slam poetry as “Coded Language,” the stage reading and DJ Krust collaborative recording that earned him his first musical bona fides. It’s a whole lot of sound and fury signifying one thing: he’s fed up, frustrated and scared by the world around him. His bars describe apocalypse as the loss of true love, and acknowledge that “hand to mouth” speaks to both impoverished lifestyle and balled-up fist. If you can forgive the off-key half-sung delivery (as Nike did) you’ll recognize a lot of the same mosh-worthy touchpoints hit in the next decade by Death Grips. – ab 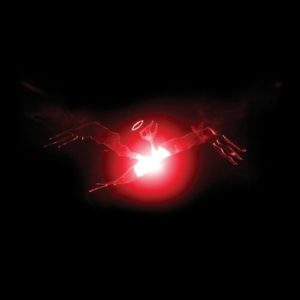 Everything that El-P produces sounds pretty dirty and grimy as it is, his uniquely speaker-blowing style of hip-hop influenced by rock and noise to varying degrees. So while it’s tempting to credit Trent Reznor with making “Flyentology” sound more industrial-tinged, the production is Jamie Meline through and through. That being said, the harrowing reflection on finding religion when you’re in a plummeting airplane is a perfect fit for the Nine Inch Nails frontman, whose screeches of “No!” behind El’s black humor sounds a little like a throwback to Pretty Hate Machine. – JT