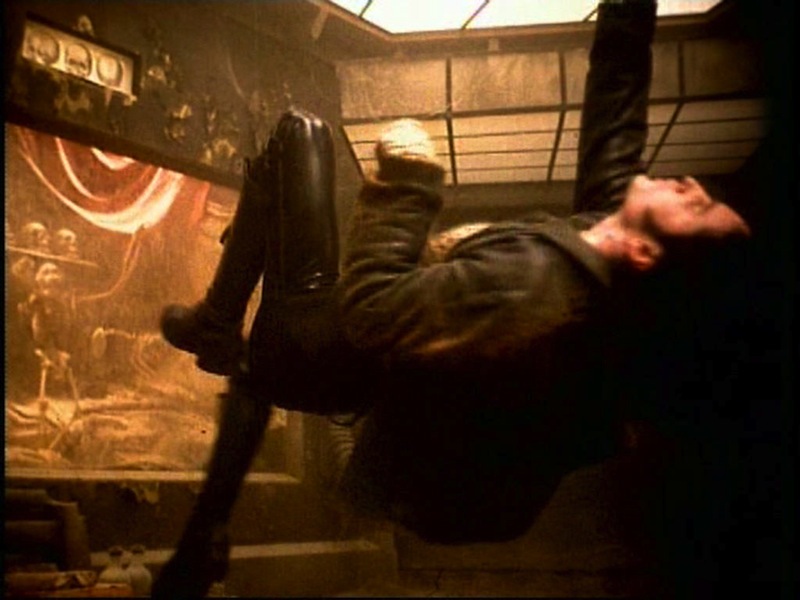 In the early ’90s, alternative rock wasn’t sexy. You can argue that about a lot of eras about rock, both mainstream and underground, but the grunge era was almost unsexy to the point of hostility. Coming off a decade in which the biggest rock stars were caked in glitter and make-up, Madonna simulated wedding night activities on the VMA stage and Prince made every day feel like an orgy, the ’90s made us all comfortable to feel kind of gross again. Flannels, Doc Martens, long and shampoo-free hair—effort no longer applied. And yet, weirdly, that in itself defined a kind of sexiness—one Scott Stapp would later exploit in the form of his bared pecs—if not one that squared with the previous decade’s definition.

And then Nine Inch Nails’ “Closer” came along. Industrial music has long been associated with sexual fetishes, primarily leather, latex and BDSM—it’s the goth look taken to a more libidinous extreme, essentially. But it’s also fairly harsh and punishing; it’s sexy if you’re into the pain thing, less so if you’re not. Trent Reznor bridged the extreme nature of industrial with a more mainstream friendly disco sound on “Closer,” easily the most accessible song on 1994’s The Downward Spiral as well as the one with the most explicitly sexual lyrics. Not that Reznor was ever really shy about that kind of thing. The dude essentially had a closet full of fishnets and just two years prior released a song called “Last,” which stated “This isn’t meant to last—this is for right now!” He’s talking about sexual intercourse, folks. In case that wasn’t clear.

“Closer” is even more direct, though. “I want to fuck you like an animal,” goes the chorus—a statement of desire that’s aggressive, primal, almost to the point of being unsexy. But it’s such a memorable phrase, and coupled with the down-and-dirty bassline of the chorus and the fetish-night-at-the-Mutter-Museum video itself, in which Reznor, himself, is the sexual object, essentially (bald, naked woman with cattle skull notwithstanding)—bound with a ball gag, blindfolded and dangling with leather gloves, spinning from invisible wires in a pair of tight, leather pants, and licking a phallic microphone—the boldness of it makes it pretty clear why the song reached as high as number 11 on the Billboard alternative songs chart on June 11, 1994. It sparked something down below, deep beneath the flannel that wasn’t really being addressed by the prevalent whine and mope going on elsewhere on the charts. Surely Eddie Vedder or whoever was some kind of sex symbol in a less obvious way, but here was a song that not just very blatantly addressed those carnal instincts, but sounded ripe for actually exercising them.

Taking a look at what else was happening in alt-rock at the time, I can’t help but reach the conclusion that “Closer” wasn’t just the right song at the right time, it was desperately needed. A few spots above at number 9, you have “Round Here” by Counting Crows, with a vocal performance by Adam Duritz that’s probably ruined more sexual acts than inspired them. Collective Soul’s “Shine,” at number five, was not just the beginning of a soon-to-be-unbearable trend of post-grunge, its prominent “YEAUUUH!” leading up to the chorus is an egregious example of the yarling vocal style that Stephen Thompson coined as “hunger dunger dang.” (Second favorite term for the phenomenon: “Nose yodeling.”) And the number one song for the week happens to be Green Day’s “Longview,” no doubt better than these other two songs, but nonetheless one that’s about being bored, listless, smelling bad and masturbating a lot. Relatable? Sure. But gross-out suburban pop-punk, despite how many white male teenagers it resonated with, was surely in need of something more adult and adventurous to balance it out.

So, no, summer of 1994 wasn’t that sexy. And that’s fine; the best music isn’t always sexy, and sometimes music with desperate aims to be sexy ends up woefully cringeworthy (see the last couple years of the Hot 100). But based on what was popular, it seemed that summer of 1994 was not only chilly in the loins, it was pretty low on fun. “Longview” is definitely fun, even though Billie Joe Armstrong’s picture isn’t so rose-tinted (or scented). Live’s “Selling the Drama” (no. 3) and Toad the Wet Sprocket’s “Fall Down” (no. 2) are perfectly acceptable adult alternative rock singles, but they’re also not that fun. Well, I take that back to a degree; the latter is arguably fun by Toad the Wet Sprocket’s standards. Now there’s a band that always seemed like they were struggling to live up to their name.

There’s also plenty of grunge trickle down happening in Stone Temple Pilots’ good but still painfully earnest “Big Empty” (no. 7) and Gin Blossom’s folk-rocky “Until I Fall Away” (no. 13). The primary exception to the rule here is Soundgarden’s “Black Hole Sun.” Granted, Chris Cornell’s lyrics have always been too over the top for his own good, but the psychedelic weirdness of the song set it apart during a time of factory-pressed power-chord pushers. Also the video was terribly disturbing, which made it an interesting curiosity if not one that felt good, exactly. So, with that in mind, is it a fun song about the apocalypse? I think I’ll go ahead and call that a “yes.”

The tracks that were fun—with or without sex appeal (some of which is delivered satirically)—all happens to hover right in the middle of the chart, not far from where “Closer” is. Tori Amos’ “Cornflake Girl” (no. 14) has endured on the strength of its swagger and strut, which isn’t as exaggerated as 1996’s “Professional Widow” would be, but at least has a playful sensibility that makes it not only easy to like but not too serious for its own good, which is a risk with Amos sometimes. Interestingly enough, Trent Reznor sang backup on Under the Pink‘s “Past the Mission,” though on a more understated scale. No screaming carnal profanities—not that made the final cut anyway. Blur’s “Girls and Boys” (no. 16), however, now there was an absolute fucking delight of a song. “Girls and Boys” is pure joy in a pulsing disco beat. At the time, it felt brazenly, unapologetically pop when held against, well, everything else happening in alt-rock. It sounded almost alien, but in hindsight that was a really good thing. Damon Albarn delivering sing-songy lyrics about hedonistic youth was a bit like the necessary antidote that “Closer” provided, but more playfully, cheekier, and with a chorus that made it past the censors. It was the only song of its kind on their 1994 album Parklife (more or less), but it was the opening shot in a burgeoning Britpop feud that Blur won on artistry and Oasis won on sales figures. That said, I don’t think anyone called Albarn a potato.

Sonic Youth’s “Bull in the Heather” was also fun. And for that matter sort of sexy. But not in ways that made a whole lot of sense. At number 15, just a couple positions shy of its peak position, “Bull in the Heather” was one of the band’s most successful radio songs, which seems really strange now; it sort of has hooks, I suppose, but not like we usually expect on alt radio. It also featured a memorable video in which we see outdoor mischief, Kim Gordon in weird boudoir scenes, and Bikini Kill’s Kathleen Hanna being silly while the band is playing. I didn’t know who Hanna was at the time—it’d take a few years before I bought a Kill Rock Stars record—but I might have developed a little crush on Hanna based on the video alone. Still, this is a really weird song by commercial radio standards, and I remember hearing it a great deal.

It’s funny—I remember 1994 being a really strong year for mainstream radio, but looking back it doesn’t, on the whole, look that way, outside of Nine Inch Nails’ lusty industrial and a handful of other gems. And then there’s the rest. Live, Counting Crows, The Gin Blossoms. I’m not sure if this is alternative rock, but it does seem a lot like a Friends episode. I think this is “The One Where Trent Gets Closer to God.”