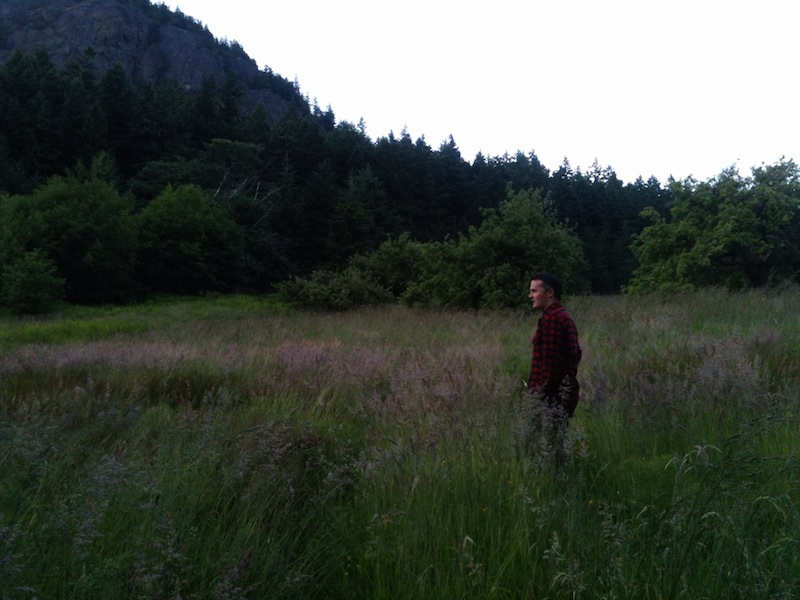 If anyone has taken indie rock beyond the city limits, it’s Phil Elverum. Through two decades of songwriting, he has compiled a vast catalogue of pastoral ruminations. Forests and rivers are traversed within his lyrics, as the natural world sustains his personal epiphanies. There is a savage solitude in Mount Eerie, which strongly evokes the American Transcendentalists of the 19th century. Elverum’s narrative of the outdoors almost seems to recall the efforts of Henry David Thoreau at Walden Pond. For evidence of this, we need only consider song titles like “Heart Lake At Night” or “Log in The Waves.” We might even substitute some of Elverum’s verses for passages from Walden. As Thoreau famously wrote:

“I went to the woods because I wished to live deliberately, to front only the essential facts of life, and see if I could not learn what it had to teach, and not, when I came to die, discover that I had not lived.”

Compare this excerpt with the Mount Eerie song  “Through The Trees Pt 2” where Elverum sings elegiacally:

These quotations are separated by nearly two centuries, but they both describe the forest as a place of hallowed mortality, an area where we are reminded of something more eternal. Our consciousness is somehow elevated from being in the woods, and the songs of Mount Eerie harken back to this wandering philosophy.

At the same time, Elverum understands these references are exceedingly complex. On his website he admits: “I have struggled at times with my tendency to use the vocabulary of the natural world, singing about ‘mountains’, ‘clouds’ and similar icons, and sometimes feeling misunderstood.” In this way, Elverum eschews the romanticism or the novelty of nature, and as he further explains:

“I don’t like the word ‘nature’ because it does a quick job of drawing a mental curtain between ‘us’ and some other realm, separate from where we live and what we are made of, perpetuating the damaging illusion that we humans can exist in some exemption, leading to irresponsible thinking and acting. Fuck nature. I believe there is only one big THIS.”

A similar viewpoint is expressed in his song “No Inside, No Out” where Elverum softly hums: “There’s no inside and there’s no out / The world is in me / And I am in the world.” Nature in the parenthetical sense, would seem to suggest a division from life, but the experience is always one and the same. So, on the album Clear Moon, the song “The Place Lives” is quickly followed by “The Place I Live”, because our habitation is inextricable from its surroundings. Even as we are protected from the elements, we are never entirely removed. Here, we might invoke Ralph Waldo Emerson, the disowning father of Transcendentalism. Where, in Nature, he writes: “The lover of nature is he whose inward and outward senses are still truly adjusted to each other.”

The wilderness, then, inspires a kind of secondary comprehension, between the wild that is known and the wild that goes unknown. This dualism is also a prominent theme in the songs of Mount Eerie. Here we can refer to the Elverum’s “(2 Lakes)” and “(2 Mountains)” both titles included in parentheses, because they suggest areas unexplored. As we come to learn: “There are two lakes / one where everyone goes / was found on maps and covered in boats.” Then there is “The second lake, just beyond the cliff “ which is “fed by bottomless spring / and still has never been seen.” It is perhaps through this alternate knowledge, that we come to fully appreciate our natural landmarks.

The very essence of Mount Eerie involves a sort of imaginary terrain, with a band name carved from a fictitious mountain. Indeed, the entire discography is rife with images of the natural world. The album art is almost always some representation of a landscape, with corresponding titles, such as Ocean Roar, Wind’s Poem or Clear Moon. There are also elements of animalism, in other records named: White Stag, Pre-Human Ideas and the just-released A Crow Looked at Me. Not only this, the music itself contains a great degree of wildness. Drum solos come stampeding into songs, riffs howl hungrily, distortion billows cloud-like. Elverum’s voice is always, unabashedly out of tune. His lyrics propose a curious philosophical dialogue, as blank verse trickles from his tongue. In most press photos, he appears outside, flanked by trees or cliffs, sometimes wearing a knitted tuque emblazoned with the word ‘Solitude.’ And recently, Elverum actually asked fans to NOT attend a performance of his newest songs.

In his very own indie-rock way, Phil Elverum seems to update Transcendentalism for the 21st century, writing lyrics that are full of subtle, self-realizations. His music celebrates the individual and the transformative qualities of solitude. He composes haikus on Twitter, and sings songs called “Get Off The Internet” or “Don’t Smoke”. So the wilderness becomes a kind of motivator, a call to action against the lethargy of the civilized word. It is an outlook that closely echoes Thoreau, who in 1845 quit his job at a pencil factory to live in the backwoods of Concord, Massachusetts. Returning to Walden, he advises us that: “The mass of men lead lives of quiet desperation.”

Indebted as they are to Transcendentalism, the songs of Mount Eerie still come burdened by all our modern complications. The lyrics often describe a struggle to escape or forget the urban climate. On the song “Lost Wisdom” Elverum sings “I got close enough to the river that I couldn’t hear the trucks / but not close enough to stop the roaring of my mind.” There is also the ethics of existence, he makes note of his carbon emissions, telling us that “Dark smoke fills the air / some from the fire in my house / some from me driving around.” In spite of all this, the natural world has retained its transcendental charm, and on the title track for his album Sauna, Elverum describes “a small room” just “beyond the field / inside the birches.” It is here that he seems to experience a kind of transformation:

“To prove that I don’t exist
To show that I am beyond
This animal form
And this lost mind
Or am I?”

This mentality is brought on by the “rising steam” of “this room in the snow” and it carries Elverum into another state of being. The sauna that he describes is an isolated structure, in the snowy wilderness, a place where he forgets that the world exists.

While Transcendentalism has a strong, albeit indirect influence on Elverum’s songs, he actually takes the ideology further, and applies it to entirely new frontiers. Composed shortly after the death of his wife Genevieve Castrée, Elverum’s latest album A Crow Looked at Me explores the overwhelming force of grief. The songs were recorded in Castrée’s room, using her instruments, and nature plays a critical role in Elverum’s grieving process. On his heartbreaking ode “Ravens” he sings about a journey with his daughter to the Canadian Island of Haida Gwaii, where he admits to “Crying on the logging roads with your ashes in a jar.” And he returns to the woods to try and make sense of it all: “We are sleeping in the forest / there is sand on the blankets from the beach / where we released you from the jar.” Death is thus understood through the eternalism of the earth, as he continues: “The ground absorbs and remakes whatever falls / nothing dies here / but here is where I came to grieve.” There is some relief in knowing that we continue to exist in this world, through other forms. And perhaps the only way to come to terms with “Real Death”, is to embrace the wonders of nature, where life itself is something immortal.