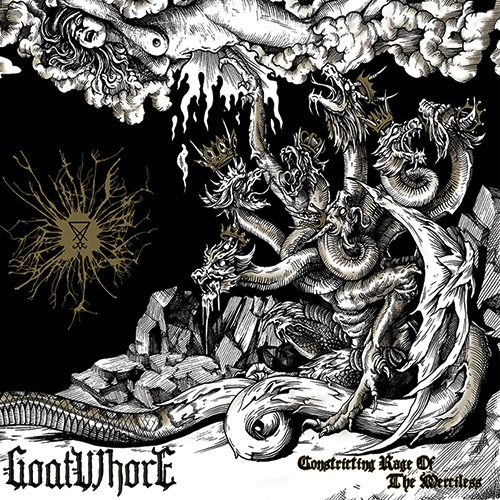 For more than 18 years, and over the course of six albums, New Orleans’ Goatwhore have been the standard bearers of a particularly nebulous — albeit frequently catchy — style of metal that essentially swirls the best sounds of 1989 to 1994 metal into one fun and crisply produced whole. They blacken their thrash, death up their sludge, and keep a close watch on their melodies, so as to never allow the ugliest or most difficult elements of their approach to take over. It’s an admirable position the band occupies, in a way; given how far metal has traveled in 45 years, and how much controversy courts those who dare attempt a true crossover effort, it’s refreshing to hear a band that cuts through the pretense and just gets right to the meaty, murky riffs.

It has its limitations, though; Goatwhore are closing out on two decades of serving up their thrashy hooks blackened and sauteed, and there’s not a whole lot that has changed on their sixth album, Constricting Rage of the Merciless. The album’s first track, “Poisonous Existence in Reawakening” is classic Goatwhore — straightforward power-chord riffs juxtaposed against a punishing blast beat and vocalist Ben Falgout barking venomous incantations in a harsh monotone. It rocks hard — the kind of straight-to-the-gut metal song that seeks to destroy through the most direct means. No fuss, no muss. But there’s also little to distinguish it from any number of melodic crossover death metal tracks out there, let alone quite a few already in the Goatwhore catalog.

There are certainly moments on Constricting Rage where Goatwhore transcends the expected, even if only temporarily. “Baring Teeth For Revolt” carries a swing and a swagger that grooves just a little bit more than their typical pummel, and the melodic layers of “Schadenfreude” prove that the band has at least learned the right lessons from the second wave of black metal. Most impressive of all is the ethereal, gothic introduction to “Cold Earth Consumed in Dying Flesh” (side note: you’ll note the song titles haven’t gotten any less ridiculous) is probably the best thing on the entire album, if only because it represents a break from the non-stop gallop the group seems to be on. There’s no question that Goatwhore is exceptional at what they do; the problem is that whatever variation exists in their music is kept to a dissapointingly narrow minimum. It would be interesting to see the band attempt more experimentation and vary up their arrangements a bit, or at least throw in something along the dirge/ballad spectrum. After five decent, if expected Goatwhore albums, pretty good doesn’t quite seem like enough.