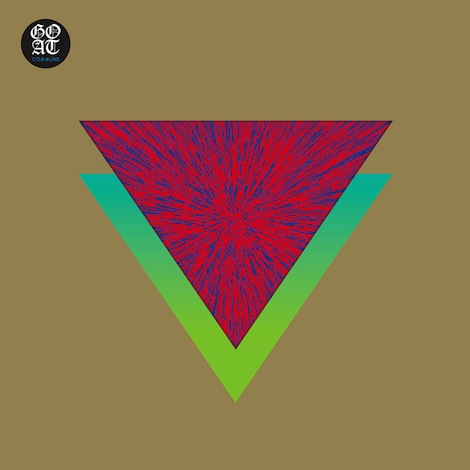 Contrary to how we sometimes perceive the arrival of artists, they don’t actually come from out of nowhere. It can certainly seem that way, though — the rise of viral video artists like Karmin and Walk Off the Moon would suggest that the climb from the bottom up to the national stage isn’t as steep as previously thought. And yet, the explosion of blog coverage and the music blogging pageview chase, in fact, seems to put a spotlight on an artist’s every single career move, giving a lot more transparency to artist development, whether it feels that way in real time or not. It’s a strange time to be a listener; anyone can become a sensation, and we get to see every excruciating detail of how they got there.

When Sweden’s Goat released their debut album World Music two years ago, however, they actually seemed like they came from nowhere. With a dubious backstory, frequently hilarious interviews and a stage presence somewhere between a Fela Kuti show and Mardi Gras, they seemed to spring, fully formed, from the head of Holger Czukay, or Mulatu Astatke, or Jimmy Page — maybe some kind of hydra-like beast that combined all three. Yet, for as much as Goat’s identity was built on shtick, their music — a wholly captivating intersection of Afrobeat, heavy psychedelia, funk and krautrock — never came off as anything less than fun, and often achieved an innovative sort of magic that, indeed, felt as if it came from the ether, like a kind of cartoonishly hip psych-rock Big Bang.

World Music still seems incredibly fresh after two years, which is an encouraging sign leading into the band’s sophomore album and Sub Pop debut, Commune. On a broad level, the two albums are pretty similar; both heavily feature fuzzed-out Blue Cheer-style guitar riffs, polyrhythmic percussion, hypnotic rhythms, a flair for the dramatic and a general feeling that you’ve gone through the looking glass, eaten the brown acid or rode a tornado out of Kansas — choose your own mind-altering cliché here. But after the first trip, Commune doesn’t feel quite so alien or surprising. It’s a continuation of the first album’s sound, stretched out into some stranger places on a few tracks, and streamlined into a more accessible approach on others. And it’s often in the simpler tracks where the band shows growth, allowing some simplicity where the everything-but-the-kitchen-sink approach had once dominated. Take “Words,” which rides a variation of the same low-key laser groove for three minutes; it has a lot of room to build into something else, but feels surprisingly complete in its pared down form. Meanwhile, the heavy-pulsing throb of “Goatslaves” is Goat at their most primal and rhythmic. And the complementary bookends “Talk to God” and “Gathering of the Ancient Tribes” are perfect examples of how the group can settle into a fiery, acid-fueled jam and never leave the sweet spot.

If there’s a qualm to be taken with Commune, it’s one born wholly in relation to its predecessor. World Music was so strong a debut — particularly given the band’s then-unexpected sonic arrival — that it had a built-in dilemma: Surpassing it would be a difficult feat at best. But Commune is good enough that, even if some of the magic has since been partially reduced to smoke and mirrors, it suggests that reaching the next level isn’t just possible, but achievable. It reminds me of nothing so much as another high-profile Sub Pop signing of years past: The Go! Team. Their 2007 album Proof of Youth featured every bit of comic-book sampladelic good vibes as its predecessor, but by then, the sound was familiar enough to not quite seem so exciting as it did the first time. Goat, thankfully, didn’t wait as long to deliver another album, and the songs here are plenty thrilling. They’ve got more traveling ahead of them, certainly, but with music like this, it’s best not to worry about where you’re going — just enjoy the trip.

Goat announce new single to be released on Sub Pop