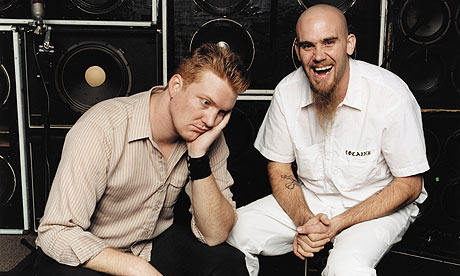 Nick Oliveri and Queens of the Stone Age have had a bit of a tumultuous past, thanks in large part to Oliveri’s erratic and dangerous behavior outside of the group. Like, for instance, his standoff with a SWAT team in 2011 over a domestic dispute, and possession of drugs and firearms. That kind of erratic and dangerous behavior. And Oliveri was originally fired from the band after frontman Josh Homme discovered that Oliveri was physically abusive to his girlfriend. But that’s — at least for one night — all in the past, it would appear, as NME reports Oliveri is reuniting with his former bandmates for an elaborate Halloween performance in Los Angeles at the Forum. He’ll also be playing a solo opening spot. The Kills will also perform at the show.

“Josh asked me to come up and do six songs with Queens, like an encore set,” Oliveri tells NME. “A reunion, but not a reunion. I’m going to get up and play some bass and sing some songs at the end of the show. It should be an interesting night.”
Oliveri also says he has no idea whether he’ll record with the band anytime soon, however. “That’s pretty much up to Josh. It’s his band, and when he pulls the trigger on something, it’s up to him,” he says. “It’s pretty much just when he wants to do something, these days. It’s not up to me, is what I’m saying.”
Oliveri will release his new solo album Leave Me Alone on Oct. 28, via Schnitzel.