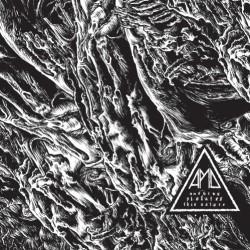 Boston hardcore supergroup All Pigs Must Die are certainly not ones for subtlety. From their band name, to their song titles, to their artwork and their absolutely punishing music, APMD is without a doubt one of the more intense acts out there today. And really, why shouldn’t they be? After all, the group’s members come from a hardcore pedigree that includes bands like Converge and The Hope Conspiracy, bolstering their bruiser cred. Padding out their resume with even more aggression and vitriol is Nothing Violates This Nature, which follows their 2011 debut God Is War. And on album number two, the band continues to grow creatively without losing any of their brutality.

Nothing Violates This Nature wastes no time before ripping the listener to shreds, and from the opening moments of “Chaos Arise” it’s a full on clutsterfuck of violent retribution. But instead of simply turning in an album of punishing hardcore akin to this opening onslaught (which would still be awesome), the band took it a step further and experimented with a litany other styles. For example, “Silencer,” which clocks in at less than two minutes long, sounds like a distant cousin to the 1980s California thrash scene, while the destructive “Primitive Fear” changes direction halfway through, without ever losing steam. Beginning with black-metal-inspired blast beats, the song shifts to a Southern riff-fest, which highlights the total range of power that APMD possesses as a unit.

“Of Suffering” kicks off the second half of the record with an acoustic intro before launching deeper into a slow burning dirge. Although still maintaining the overall heaviness of the album, the track feels slightly out of place right in the center, and would have probably been a better song to open the album with. That being said, the reprieve from speed doesn’t last long as the next batch of songs brings a full-on exercise in mayhem. The real highlight of the album is “Faith Eater,” full of unbridled punk rock fury, while “Articles of Human Weakness” closes out the album with a smattering of everything that came before it, from blast beats to gnashing hardcore rage, before delivering a powerful breakdown that ends with the song collapsing into a cacophony of noise and feedback. Whoa.

Nothing Violates This Nature is pretty damn intense, even by hardcore standards, but what makes it a great album is APMD’s unwillingness to be complacent in their craft. They could have easily gotten away with playing straight hardcore, but instead have chosen to incorporate elements of other styles that give the record a familiar yet unsettling vibe. It’s pretty clear from the get-go that Nothing Violates This Nature is going to kick your ass, but thanks to their ace songwriting, the fun comes in finding out just how that’s going to happen.

All Pigs Must Die – God Is War

All Pigs Must Die : God Is War