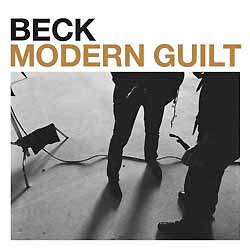 A week ago, as I was driving down 210 heading towards my nighttime gig listening to the radio, I contemplated whether or not I should pick up the new Beck album. I’ve been a Beck Hansen fan since the beginning, and I’ve already reviewed two of his albums for Treble but I wasn’t really feeling the anticipation for another one of his releases. Then I heard a Beck song — “I Think I’m Love” from The Information — on the radio. I took this as a sign.

Soon after, I read that Danger Mouse, the same mixmaster who innovatively mixed backing tracks from The Beatles’ White Album with raps from Jay Z’s Black Album, produced the album. That’s all that it took. I made a pit stop and picked up my copy of Modern Guilt.

The merging of Danger Mouse and Hansen is a wet dream for hip-hop and Beck fans. But those looking for another radio hit single like “Crazy” have come to the wrong place. Guilt is an entirely new phase for Beck, and here, Danger Mouse has Beck working on a strict, classic 3-minute song structure. The album is only 34 minutes long, and after the epic length of The Information, Beck is kicking it with an old school Mellow Gold-style of yesteryear.

Some music bloggers have mentioned the similarities between the cover of Beck’s Guilt with Radiohead’s classic EP My Iron Lung. I tend to think that this is a little nod toward the band, and seeing as how Modern Guilt is Beck’s last album for Interscope, I have a feeling that Hansen’s going to follow Radiohead’s route to free agency. Modern Guilt is a signal to the future direction of Beck’s career.

There are no “Loser” or “New Pollution” type singles on Modern Guilt. From start to finish, it is the most complete sounding album of his career. It’s also, as a whole, one of the best. There are no filler songs. None of them drag. Beck, just like Radiohead and a plethora of indie bands, pursued an album with a time format fit for vinyl, a dramatic change from the original modus operandi for the digital age, when artists like The Cure would fill CDs up to their 70-plus minute time limit. And with certain exceptions, albums like that tend to drag. The 30-minute format gives the listener time enough to absorb the album and take in all the nuances, beats and flavors with every spin.

Modern Guilt thrives under this condensed format. “Orphans” opens with an ominous beat echoing the Danger Mouse-produced Gorillaz album Demon Days, and then as an acoustic guitar strums, Beck sings “I’ll stand beside myself so I’m not alone and how can I new again?” This is the eternal question any artist like Beck ponders throughout Guilt. Enter Cat Power who adds a layer of her trademark lush vocals, which blend smoothly with Hansen’s. It sounds like they become one, and you have to listen closely or you’ll miss her contribution on “Orphans” and “Walls.”

Modern Guilt has a vintage essence that pounds throughout. This is what Danger Mouse, a connoisseur of classic rock culture, brings to this project. Incorporating ’60s Go-Go rhythms on “Gamma Rays” as Beck’s spaced out harmonies echo in the background is a brilliant move, and it sounds like Beck and Danger Mouse must have had a blast in the studio. They seem to have the same appreciation for forgotten music flavors that went out of style, and bring them back with passionate zeal.

Listen for the “Mr. Blue Sky”-inspired ELO backbeats on the title cut, or the prog stylings of “Chemtrails.” It’s as if Beck is traveling through time picking up instrumental sounds and incorporating them naturally in this mix. Maybe this is what Modern Guilt means. Is this why he sings, “Misapprehension is turning into convention/ don’t know what I’ve done but I feel ashamed?” Does Beck feel some kind of remorse from borrowing from the past? Perhaps, though I hear these samplings as sonic foundations he builds on with his psyche penetrating lyrics.

Danger Mouse backs these bewildering lyrics with the kind of beats that keep your body working to figure out the meaning with every mental step you take.

Modern Guilt ends with Beck on the streets of “Volcano,” on the same journey he started on “Orphans.” Along the way he questions religion of “Profanity Prayers” and searches for the “Soul of Man.” Throughout it sounds as if Beck is trying to discover the identity of his true shadow. As he is an artist with one step in the past and his mind in the stars, following Hansen on this voyage is half the fun. If Modern Guilt is any indication for the direction that Beck’s taking, sign me up for the next one.

Eels – Blinking Lights and Other Revelations