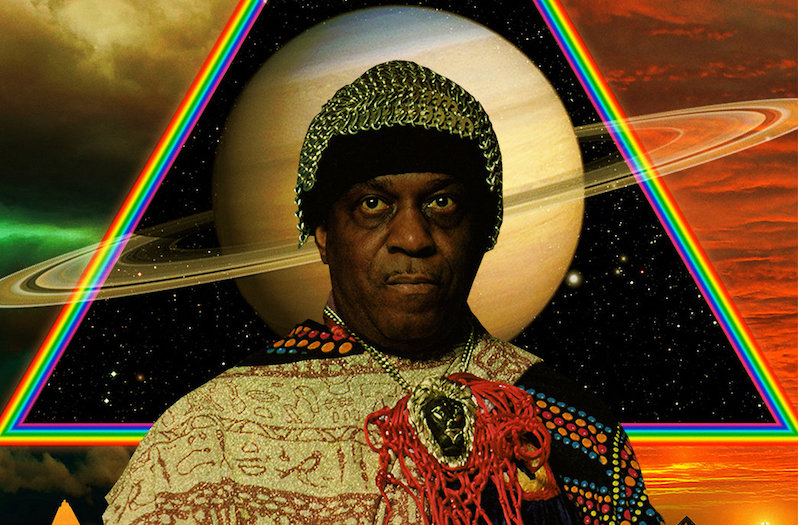 There’s probably no question in music more loaded than “Where do I start with the music of Sun Ra?” He’s released around 90 albums, recorded over 1,000 tracks, and has taken more stylistic detours than just about any other jazz musician, save for Miles Davis, John Coltrane and Herbie Hancock. (And probably a few others while we’re on the subject.) But there’s another aspect to it: Sun Ra was doing things that nobody else was doing at the time. He was doing things that nobody else even realized you could do. It’s not quite right to say he had any actual peers; Sun Ra operated on his own plane. The man, after all, claimed to have landed on Saturn.

Born in 1914 in Birmingham, Alabama, Herman Poole Blount grew up in a segregated America, and early on in his career played to heavily white audiences in the American south. A spiritual experience in which he communed with aliens, so the story goes, changed his life and ultimately led to him pioneering an Afrofuturist philosophy, as showcased in the film Space is the Place, a peculiar allegory about race told through elements of sci-fi, Bergman and Blaxploitation films. But in the decades before that, he relocated to Chicago and began to form what would become The Sun Ra Arkestra (or Sun Ra and His Solar Arkestra, Sun Ra and the Myth Science Arkestra, etc.), the big-band ensemble backing him on many of his monumental recordings. In 1952 he changed his name legally to Le Son’y Ra (a permutation of the nickname “Sonny” that he was given as a child), and a cosmic legend was born.

The breadth and magnitude of Sun Ra’s work is too massive to try to fit into such a compact space. He’s a mythical figure for many reasons, one of them being that he created his own myth. But another is that his work was so ahead of its time, so odd and atypical for what was happening in jazz at the moment, that it seemed entirely possible for this music to be beamed from outer space. He even looked the part—the man had an unmistakable visual aesthetic. But Sun Ra often wasn’t appreciated as a result, and some of his greatest recordings have only achieved proper appreciation in hindsight.

As we approach what would have been Sun Ra’s 105th birthday (he died in 1993 at age 79), the time seemed right to offer our own take on a starter’s kit for the music of Sun Ra. Figuring this out was tricky; plenty of other publications have done their own versions and essentially no two Sun Ra guides are alike. (And I’ll be honest here—any guide that tells you to start with 10 of his weirdest free jazz albums is making some pretty big assumptions.) There’s a lot to cover, and doing so with a homework assignment of five of the best Sun Ra albums is really just a small sampling of what his music is all about. (Really, it’s a long catalog, and you should definitely keep going after these.) But it’s an epic journey worth starting. 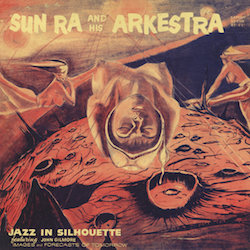 Given Sun Ra’s reputation for wildly experimental free jazz, cosmic spiritual explorations and some of the most unconventional sojourns in all of jazz music, it might come as a surprise for some to hear just how accessible and immediate Jazz in Silhouette is. Though this was relatively early in Sun Ra’s career, he was already in his forties, and some of his wildest material came well into his senior years. Jazz in Silhouette, while by no means ordinary, has far more in common with the post-bop sounds of the era. It swings, it sways, and its big band arrangements are at times charming, elsewhere stunning. The opening “Enlightenment” is surprisingly cool—as in cool jazz cool. Obviously Herman Blount was cool, in ways that we’re still attempting to translate and comprehend, but this is a more accessible kind of cool. He goes for the exotic and sprawling on “Ancient Aethiopia,” and finds a low-key groove in “Images.” It’s not necessarily an album that will appeal to everyone—jazz somehow is still a hard sell to some listeners. But for anyone with a penchant for melody-driven jazz with a lot of swing, this is a splendid entry point to Sun Ra’s increasingly peculiar world. 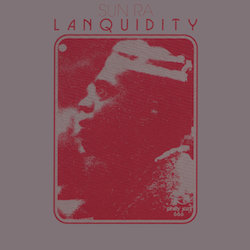 Sun Ra’s music didn’t progress in a linear fashion. There’s an arc, but maybe more accurately a series of arcs, rising and falling in intensity like a roller coaster. It took him some time to get from hard bop to free jazz, and that path zigged and zagged, more of a gauntlet than a direct route. Yet once he arrived at free jazz, Sun Ra also found his way beyond it, away from it and back in a manner of speaking. More than a decade after his most intense, soul-splattering exercises in sci-fi intensity, Sun Ra worked his way back toward funk, soul and, eventually, disco. Lanquidity is Sun Ra at his fusion funkiest, driven in large part by the sound of his own keys—both acoustic piano, heavy on R&B groove, and the crackling warmth of Hammond and Rhodes. To hear a song like “Where Pathways Meet” after some of Sun Ra’s most adventurous and “difficult” music in the ’60s is to hear what ultimately seems like an entirely different artist. It’s not, of course—this is as adventurous as funk gets, at times serene and ambient (“Lanquidity”), at others strange and eerie (“There Are Other Worlds”). Perhaps just a hair less accessible than Jazz in Silhouette, Lanquidity is Sun Ra offering the best illusion of being down to earth and grounded. He’s still exploring his own pathways in space, but he finds a way of making every bassline and rhythmic thump touch back down. 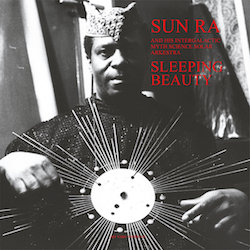 So much of Sun Ra’s music is about agitation, movement, exploration or uncertainty. Even when it’s quiet, it’s not always soothing. And even when it’s accessible or melodic, it doesn’t follow a predictable path. Which isn’t to say that Sleeping Beauty is, in fact, predictable. By the very fact of it being Sun Ra’s most serene, beautifully dreamy album, it’s unlike most other major works in his catalog. It’s the kind of album that feels more suited to late night listening, after the rest of the world’s gone to sleep. It is called Sleeping Beauty, after all, and as such it takes the listener into a twinkling dreamworld defined by more subdued performances and the surreal sounds of Sun Ra’s celestial Rhodes piano. At the center of the album is a more urgent, soulful piece, “Door to the Cosmos,” which puts more spiritual verve into the ceremonies. But by and large, this is a more ambient album, one of more gently gorgeous tones and stunning details. It’s a wonderful comedown after the groove session of Lanquidity. 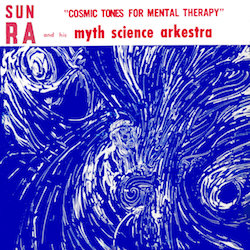 Cosmic Tones for Mental Therapy is the kind of title that suggests something soothing—the kind of sound that can re-center someone under duress or overcome with anxiety. It’s, well, not that. It’s far from the most chaotic Sun Ra recording, but boy, is it weird. But it’s weird in a fun, playful way. The reed heavy sounds on “And Otherness” and “Thither and Yon” are practically cartoon soundtracks, the sort of mischievous scores to some rubber-bodied explorer attempting to outsmart a tiger in a torch-lit cave. What’s interesting is that the album begins with some of its most disorienting material before segueing into the echo-laden Afro-jazz rhythms of “Adventure Equation” and the hyper-charged exotica of “Moon Dance,” wherein Clifford Jarvis’ drums unexpectedly add a dose of intensity and heaviness that the preceding tracks never seem to hint at. It does lead one to wonder if there is a therapeutic quality to these five tracks. I can’t answer with any certainty, but I know I certainly feel better after listening. 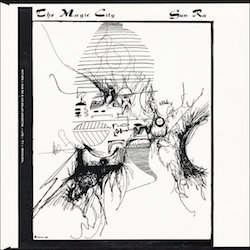 My initial plan for this guide was to not go too far into Sun Ra’s most abrasive and far-out excursions into free jazz. Regardless of how well its permutations might represent an artist’s style, free jazz takes some building up to. But then again, to leave out Sun Ra’s most intensely improvisational works is to overlook the man’s most wildly inventive moments. Some of those moments I’d only suggest to those willing to plunge into acoustic madness. But then there’s The Magic City. In terms of accessibility, it’s not the most impenetrable of Sun Ra’s material, but it’s also not as approachable as the funky Lanquidity. The album takes its name from a sign at Birmingham Terminal Station in Sun Ra’s home city of Birmingham, Alabama, though the “magic city” of the album itself might as well be on the moon. It feels at times less like a jazz album than an improvisational sci-fi soundtrack, which likely has a lot to do with the use of tape echo. The 26-minute title track feels like an arrival on some alien terrain, with Sun Ra’s clavioline bringing an ample dose of Star Trek to the opening ambient section. The intensity grows, the atmosphere grows more chilling, then curious, then explosive, then mysterious and bluesy. It’s a lot of sound to take in—an album’s worth of music in one track essentially. But there’s more to it than that, from the somewhat more conventional sound of “The Shadow World” to two permutations of the same musical exercise: “Abstract Eye” and “Abstract ‘I'”. It’s all fascinating, weird, wild and fun. And while newcomers to Sun Ra might do well to soak up a few of his other records from different eras first, there’s no fully understanding Sun Ra’s astral traveling without making a stop at The Magic City.

Also Recommended: After diving headfirst into the weirdness and intensity of The Magic City, take a step back into some of the sparse weirdness of Atlantis. It’s not the least accessible set of music in his catalog, but it’s definitely out there, primarily featuring clavinet and percussion, which makes it sorta funky, sorta spacey and definitely out there. But there’s almost nothing else in jazz like it. From there dive into his singles, particularly “Nuclear War,” a Cold War-era nihilism jam that Sun Ra apparently thought was going to be a hit in spite of repeated chants of “It’s a motherfucker!” Then enjoy the swing and melody of The Nubians of Plutonia, also known as The Lady With the Golden Stockings. And finally, prepare yourself for Sun Ra’s disco excursions from On Jupiter, particularly “UFO.” It’s the jam.

Advanced Listening: Ready for Sun Ra simultaneously embracing his most primal moments and his most intellectual? The Heliocentric Worlds of Sun Ra—both the first installment and its more string-heavy second volume—is where it’s at. Then take a detour into more sprawling atmospherics in the aptly titled Other Planes of There. And finally, watch the film and listen to its corresponding album Space is the Place (which is not the soundtrack, just to be clear). The title track is a chant-along moment of soul-jazz uplift, while its second half pretty much tours every facet of Sun Ra’s output up to that point.