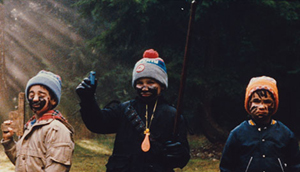 While not celebrated quite so fondly in an age of digital media, an album’s cover, when done well, is still something to be celebrated. It creates a mood before the music even starts. It catches the eye and draws the potential listener in. And more often than not, stands as a brilliant piece of art on its own. With that in mind, 2010 had its share of great album covers and here are the ten that impressed us the most.

The first National album not to depict any member of the band on its front cover, the image on High Violet is actually a work of art by Mark Fox titled “Binding Force.” The abstract but vibrant cover is certainly an eye-catcher, but still elegant, much like the band’s music.

Spoon generally have some pretty good album covers, though their choice of a 1970 photo by William Eggleston brought their latest a certain sense of intrigue and unease.

A concept album tied to the Civil War needs an old timey image to accompany it, and this one does quite nicely. The embossed typeface is, likewise, a nice touch.

The story goes that, to place a wolf in opulent surroundings, the creative people behind the cover of Grinderman’s sophomore effort actually had to create a self-enclosed room for the lupine terror. Nonetheless, the fact that it looks like a wolf is prowling around someone’s mansion is quite a sight to behold.

Each of Robyn’s Body Talk recordings features a vibrant and impressive cover image (the first installment actually has two!). But this one is the most striking, a colorful and geometric representation of the Swedish singer that actually recalls Björk’s frequently stunning cover art.

The front image that adorns the latest release from Georgia’s Harvey Milk is as stark and ominous as the music itself. The minimal black and white image doesn’t denote the work of a metal band so much as an ambient or folk act, but it makes perfect sense when paired with the band’s harrowing dirges.

The TV glow on the cover of Emeralds’ newest album is positively eerie. It’s almost Poltergeist material, really. But it’s also a stunning visual piece, and an alluring companion to this ambient masterpiece.

Women’s music, despite its abrasive and sometimes furious tendencies, often seems very wintry. Not in a gentle or serene sense, but in a downright brutal way. Thus, the menacing snowstorm on the cover of their second album only makes perfect sense.

We’ll just say this: when you put a group of tough looking kids on your album cover, looking like they’re going to rob you and maybe rough you up a little, you’ve got the album cover of the year.