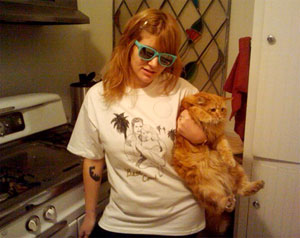 Keeping tabs on our favorite musicians has become a lot more entertaining ever since the arrival of Twitter. Through this microblogging site we’ve been able to keep tabs on who’s picking fights with whom, which artists have outspoken political beliefs, what they’re all eating or drinking, and whether or not they’re actually likely to engage with fans. And best yet, we discover just how funny an artist like Ted Leo or Fucked Up’s Damian Abraham really are, which, if you’ve ever seen either artist live, shouldn’t be that surprising. As a result, we’ve compiled our ten favorite artist tweets of 2010. And, hey, we’re on Twitter too: @treblezine. You know, if you feel like discussing the great Smashing Pumpkins vs. Pavement debate with us.

10. “Man, writing lyrics is hard… but not as hard as having a real job.” – Fucked Up’s Damian Abraham, reminding fans that he’s living the dream. (from @leftfordamian)

9. “Might need to turn to the nuclear option and ask @kanyewest for advice…” – Ted Leo, seeking sage wisdom after discovering an out-of-context quote in Spin. (from @tedleo)

8. “Just found out SP is playing with Pavement in Brazil. It’s gonna be 1 of those New Orleans type funerals” – Billy Corgan, apparently still holding a grudge after 16 years. (from @billy)

7. “@lcdsoundsystem Have u heard from that fat, naked PCP guy that attacked you at Bonnaroo? I want to find him and see if he’s ok” – Wayne Coyne. Speaks for itself, really. (from @waynecoyne

6. “Oh I hate Katy Perry so much, you do not represent California girls, bitch.” – Best Coast’s Bethany Cosentino, starting beef in the name of her proud home state. (from @bestcoastyy)

5. “The Men at Work plagiarism verdict is garbage, they got robbed. Related: Owl City should really consider buying Ben a pony.” – Death Cab for Cutie’s Chris Walla calls out electro-fluff band Owl City for their imitation of bandmate Ben Gibbard’s other project, The Postal Service. (from @jumex)

4. “M.I.A., the Glenn Beck of the left.” – The Decemberists’ Colin Meloy, who apparently doesn’t agree about Facebook being a CIA front. (from @colinmeloy)

3. “if u r small minded enough to vote against gay marriage,u should be sent to prison,cause god knows what else u r capable of.” – Of Montreal’s Kevin Barnes, standing up for equal rights. (from @xxofMontrealxx)