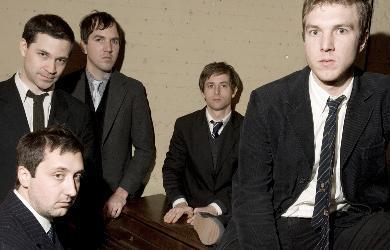 In this Jeff Terich solo edition of Best Song Ever, the fine readers of Treble are given five songs to obsess over. Yeah, that’s right, obsess. They’re that freakin’ good. I’d play them over and over again, myself, if I weren’t afraid I’d ruin myself on them. Ah, what the hell, how `bout one more rotation each?
Happy listening!

“New Year’s Eve”
by The Walkmen
from Bows and Arrows

I’ve never been one to get excited about New Year’s Eve. It’s really just another day, with no real significance other than that it’s the end of a cycle, which we get to live all over again. But I might be inclined to partake in more celebratory activities, should this song ever be playing on December 31st. With a sort of sentimental, drunken twinkle-piano melody, it’s like “Auld Lang Syne” with style. Only it seems far more apt for a soundtrack to a sloppy stumble home from the party, snowflakes falling all around as you trudge through ice and snow in a fuzzy hat and scarf.

“Rebellion (Lies)”
by The Arcade Fire
from Funeral

As we approach the one year anniversary of this song, it’s only natural to ponder, “Is it really that good?” Of course it is! Hell, it may even be better now than it was the first time, and that was a pretty mind-blowing experience. It’s at first celebratory, a driving epic melody that could bring a smile to your face and tears to your eyes all at once. It’s a perfect single, or rather, a perfect song. Yet, when you listen to the lyrics, it’s kind of a kick in the face. It’s really about discovering that everything you were told as a youngster is bullshit, realizing your parents must have been cruel to subject you to such falsehoods. Yet when the band chants “li-i-ies/li-i-ies” during the chorus, it’s something of a snotty comeback, as if to say “we know what you’ve been up to and we’re not buying it.” Maybe that’s where the “rebellion” comes in. It’s such a rush, emotionally, however, that you feel the song more than hear it.

“Debonair”
by The Afghan Whigs
from Gentlemen

Listening to anything off of Gentlemen makes one not want to fall in love, have sex, or basically ever have any intimate contact with a human being, ever again. And yet, somehow it makes for great listening. “Debonair,” especially, with its ultra-low basslines, funky post-punk guitar and hypnotically chaotic chorus. Greg Dulli, at the very least, makes a compelling case for not sleeping with him, delivering the harrowing lines “It don’t bleed and it don’t breathe/it’s locked its jaws and now it’s swallowing/it’s in our heart/it’s in our head/it’s in our love, baby it’s in our bed.”

All Things Ordinary”
by The Anniversary
from Designing a Nervous Breakdown

Emo’s not cool anymore. This much I know. But even when it was “in,” I strictly denied being emo, mainly because most of the music wasn’t that good. But I loved The Anniversary. I can’t explain it really. It’s not that they sounded that much different than bands like The Promise Ring or The Get Up Kids, but when it came down to it, their songs were better. Especially “All Things Ordinary,” a fist-pumping anthem with the power and conviction of a Springsteen classic. Between the chunky distorted guitars, the female backing vocals and the emotional chorus, it had all the makings of a “Born To Run” for the 21st Century. Too bad they broke up two years later, or they could have pulled out a “Born in the USA” as well.

“Feeling Oblivion”
by Turin Brakes
from The Optimist LP

Whenever I hear this song, I am torn between overwhelming feelings of joy and melancholy. Among an album of low-key, folk rock ditties, “Feeling Oblivion” was a heart-wrenching ballad with beautiful melodies and vocal harmonies, even if the duo’s voices aren’t conventionally “good” ones. Olly Knights alone has an odd, high pitched register, but it works remarkably well in this capacity. Opening the album on a somber note, “Feeling Oblivion” paints pictures of several non-sequiturs before easing into the anxious and uncertain chorus: “If things get too real/promise to take me somewhere else/by the time fear takes me over/will we still be rolling and feeling oblivion.” In a way, the open-ended apprehension of the song would seem like a better album closer, but I can’t imagine a more perfect song to introduce someone to this fine British group.