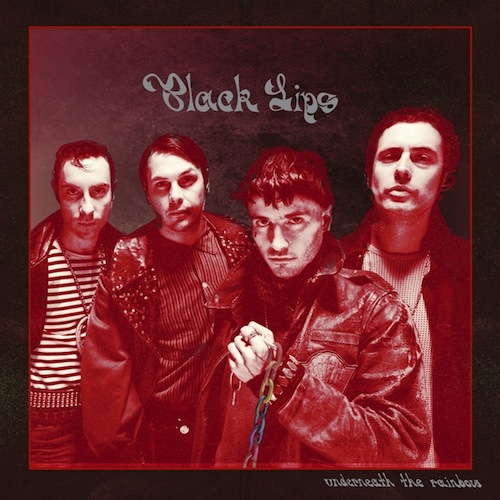 Black Lips are a stiff drink made up of equal parts classic rock, country and punk, and unfortunately the recipe has only gotten less intoxicating with age. The group is sandwiched between Black Keys and Black Moth Super Rainbow in my library, and these bands on either side have each put out better records recently. That Black Keys mention isn’t coincidental, either; that band’s Patrick Carney produced several songs on Underneath the Rainbow. “Boys in the Wood,” which was released in January — and was the subject of an ATL Twins-directed video featuring many levels of douchebaggery (a woman pissing on some masked dude) — has Carney’s influence all over it. Drummer Joe Bradley’s lumbering beat picks up pace, leading the Lips into a smoky jam of drunken debauchery (“Them boys are wild, back in the woods/ They got a child, it’s misunderstood”).

Lyrically, Black Lips haven’t grown up, and that might very well be for the best — the band has staked their reputation on performing one raucous, bodily fluid-soaked show after another. Jared Swilley and Cole Alexander serve up lyrical imagery rife with drinking (“The bottle of whiskey poured down his throat”), ridiculous humor (“Come suck some milk from my titties”), and questioning of authority (“I can’t tell a ranger from a real cop”). But most of it falls pretty flat, save for “Do the Vibrate,” which is ability to be aroused by shoving a cell phone down your crotch. Swilley shouts the title of the track over a sinister psychedelic racket that’s over way too quickly. Black Lips tend to attract attention when they’re doing something weird or stretching their limits, but that rarely happens on Underneath the Rainbow. They seem all too content with simply settling for average rather than aiming for the off-the-wall heights of the rest of their superb catalog, and that’s just heartbreaking.

Making an album over three different sessions with three different producers — Tommy Brenneck and Ed Rawls, plus Carney — doesn’t leave room for much cohesion, and it’s easy to tell that the record was broken up into pieces. Underneath the Rainbow may be the most well produced Black Lips album, but that’s not necessarily a selling point. Earlier records like Good Bad Not Evil and 200 Million Thousand sounded more mysterious at a lower fidelity, and had better songs; Underneath the Rainbow has about a 33 percent knockout rate by comparison. Underneath the Rainbow isn’t terrible — in fact it’s more appealing than a lot of what passes for rock music that hits the shelves of late — but when you’ve been releasing consistently great albums for years and years, it’s all too easy to hear their mistakes or missed opportunities. But, knowing Black Lips, they likely don’t care what you think — and why should they? Black Lips still have plenty of classics to pull out at their sweaty, booze-soaked shows.

King Khan and the Shrines – Idle No More