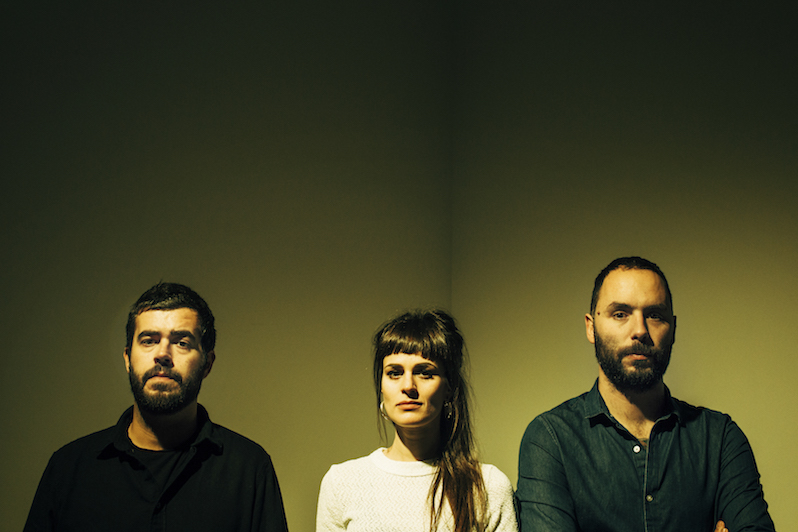 The best or most interesting heavy music isn’t always defined by the same qualities. There’s no disputing the power of the riff—the central unit of measurement against which most forms of metal, hardcore or otherwise will inevitably be compared. But sometimes it’s more about what a band builds upon that riff, what fills the spaces in between and what kind of atmosphere blankets those moments of musical intensity. And even beyond that, it can be defined by something intangible or mystical, a quality that goes beyond visceral or surface-level reactions.

Yet for Peter Mulders, bassist for Belgium-based post-hardcore/post-metal trio Brutus, it’s less about the raw, surging power of the song or the darkness or menace. He just wants to hear something catchy.

“I’m not happy if I can’t play it in my car and sing along to it,” he says via Skype call. “For me, a good song is a song I can sing along with.”

Brutus are the rare band in an ostensibly metal space for whom hooks are an essential part of the equation. It’s, of course, a little more complicated than that. Mulders, drummer/vocalist Stefanie Mannaerts and guitarist Stijn Vanhoegardaen craft an unusual fusion of muscle and beauty, their sound an immediate but intricate blend of metal intensity, shoegaze-like sonic layers and hardcore immediacy. And on their sophomore album Nest, out next week via Sargent House, they sharpen their focus, refining each of the disparate elements of their sound into a cohesive full-length that not only sets them apart from most other heavy music right now but shows just how good they are at crafting this unique sound.

If you feel good, what do you write about? ‘I’m feeling good, I’m so at ease.’ Who wants to listen to that?

To most listeners on the west side of the Atlantic, Brutus still feel like relative newcomers—they arrived fully formed in 2017 with debut album Burst (which they explain came about in the kind of spontaneous manner the title suggests). But they’d been working at it for half a decade at that point, building their own musical identity from scratch and proving themselves the old fashioned way.

“I’m a very impatient person,” Mannaerts says of their dues-paying first few years. “It happened pretty quickly, but [by the time Burst was released] we were already pretty busy for five years. The last year and a half that was pretty quick. But we had already played 200 stupid shows in Belgium, just playing to friends until eventually we started to fill venues on our own.”

“Belgium is special in a way, because you can play a lot in Belgium, but you’re still a Belgian band,” Mulders adds, emphasizing the difficulty in breaking out of their own immediate surroundings. “When we recorded Burst we had no label at all, so that was March 2016, and the album came out in 2017 and then we signed with Sargent House and it came out in the states, and that was not even two years ago. So in those two years everything came out fast. So we played a lot in Belgium, but not outside Belgium.”

The band’s origins trace back quite a few years, when Mannaerts and Mulders briefly played together in a Refused tribute band before the Swedish hardcore group’s reunion in 2012, a story that they’ve grown a bit tired of telling (“We’re not fanboys or something,” Mulders says.) The explosiveness and dynamics of that band can certainly be heard in a song like “Cemetery,” the second single released from Burst. But the album covers a wide spread, from more complex rhythms to moments of pop levity and more dramatic builds, all created within a guitar-bass-drums dynamic.

It wouldn’t work without the kind of communication that the three members of Brutus have with one another. Mannaerts explains that they’re not just fully collaborative, they don’t hold back when it comes to creative opinions: complete and brutal honesty.

“Everyone can say whatever they want,” Mannaerts says. “Doesn’t matter what instrument you play. Just because Peter plays bass doesn’t mean he can’t say anything about my drumming or my singing. And it doesn’t mean I can’t say anything about his bass playing. We can all say something about each other’s instruments. In a nice way, of course, because we’re all touchy emotional people. There’s not a lot of sugar coating, but you know how it is. I don’t have the feeling that, in this band, nobody is saying what they really think. Everyone is very sincere.”

The title of Nest extends from a sort of inside joke between the band’s members and friends—if you’re part of their inner circle, you’re in their “nest,” as they say. But the significance of that is in the kinds of stresses that being a band with their kind of drive and ambition can have on outside relationships. That struggle for safety, security and familiarity plays a major role in the themes of Mannaert’s lyrics on this album, from the longing for comfort in “Django” (“I wish that I could stay forever“) to fighting through a moment of depression in “Horde V” (“The air is thick, there is no light“). Brutus are all too aware of the kinds of sacrifices being a touring musician requires. They’ve had the fortune of being able to spend time on the road with bands such as Chelsea Wolfe and Russian Circles, though the flipside of that is friends, families and even employers don’t always react so positively. All the more reason why that nest is so important.

“For us, we know why we’re doing this, and we have our little nest on our own,” Mulders says. “But on the outside, there’s some tension going on, and there are questions, and not everyone understands it. Like your mom or your best friend for years doesn’t always understand what you’re doing. When we were writing, Stefanie put a lot of those emotions into her lyrics. After some songs were written, it was pretty clear that we’d name our record Nest. Almost every song handles… people not understanding you. Or maybe they do understand. It’s not all bad. But if that happens…you’re even more aware of why you’re doing everything. It puts everything in sharper focus. It makes everything better.”

Though Brutus confront darkness, they don’t let it win. Theirs is a sound of resilience and of triumph, of standing up to negative forces and pushing back. It’s music made for catharsis—and yeah, it’s pretty catchy, too.

“If I don’t have to deal with myself and just make music as much as possible I’m very happy,” Mannaerts says. “People will ask ‘what’s Nest about’ and it always seems like it’s negative. But if you feel good, what do you write about? ‘I’m feeling good, I’m so at ease.’ Who wants to listen to that? You put on music when you feel bad, and when there’s someone else singing about pain, it’s like ‘fuck yeah! I can relate to that.’ I don’t know any other way.”