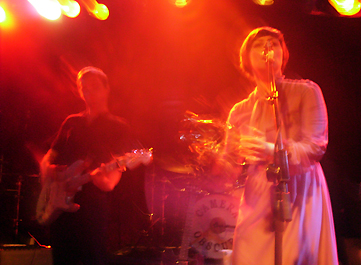 When Tracyanne Campbell, in lavender dress, and her fellow Glaswegian band members in Camera Obscura took the stage, I was ready to be heartbroken. But Campbell and her band mates took their time in breaking it. With cups of tea in hand, they smiled before their swooning audience.

The set began with a slower number, “Come Back Margaret,” as the band settled their nerves and immediately captivated the audience. After the applause, an eager fan begged the band to “play it again.”

“Cause it’s so good,” the fan replied as the band members laughed.

It was the start of a friendly repertoire and banter held between band and audience members throughout the evening. Campbell joked about not noticing the swarming fans in the balcony from when the band played the same venue this past summer.

The band eased into their set, showing their road-weariness while playing a few numbers from earlier releases before segueing into more waltzy numbers from latest release Let’s Get Out Of This Country, like “The False Contender” and the organ-fueled “Tears For Affairs.”

Campbell toyed with a group of fans in the front, one sporting a “Scotland’s for me” t-shirt (a Belle & Sebastian design) and another sporting a fake Scottish accent.

“There’s a couple of people with fake Scottish accents up here,” she accused the fans in-between songs.

The accused fan was dumbstruck, but took it in good humor, mumbling something about having just returned from Scotland.

“At least you tried,” guitarist Kenny McKeeve said, clad in slacks and vest and doing his best to reassure the fan.

Campbell slowed down the tempo and turned up the reverb for the sauntering “Dory Previn,” with the best Spinal Tap reference I’ve heard to date: “Turned you up to eleven for the band’s ears to bleed.” She suffered from a funny little frog in her throat during that particular number, afterward inviting any fan who knew the lyrics to feel free to give her a hand.
The flourishes of strings, which play a prominent role on the band’s latest release, were hardly missed. Countless handclaps deafened the club with the sing-along “I Need All
The Friends I Can Get,” and from there it was straight into the band’s more rocking numbers, fan-favorite “Lloyd, I’m Ready To Be Heartbroken,” and new single, “If Looks Could Kill.” The set ended with “Let’s Get Out Of This Country” and the haunting reverb of “Country Mile.”

Amid gasps and sorrowful moans upon learning it would be the band’s last song, Campbell smiled, reminding everyone, “You know the drill,” to uproarious laughter. The band returned for the encore, breaking their “Houseboat rule” and taking a fan request for a song from their first album, Biggest, Bluest Hi-Fi. It was a solid rendition of “Houseboat,” despite Campbell’s lament beforehand of “I cannot believe we’re playing this.”

It may have been two days too early, but Tracyanne and her troop of merry Scots broke my heart anyway, and I couldn’t be more thankful.