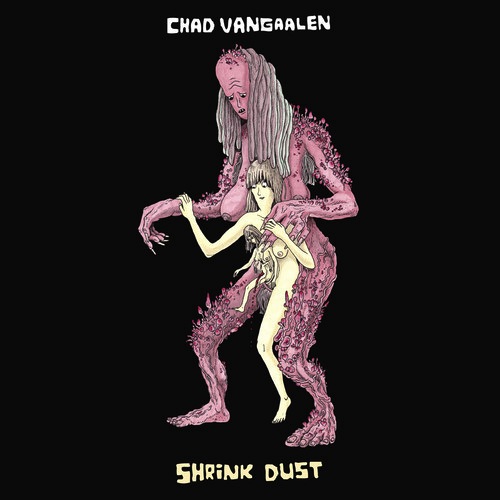 It’s hard to think of a more representative song title than the slow-motion explosion of “Where Are You?”, the second track on Chad VanGaalen‘s fifth album, Shrink Dust. Hypnotic, almost-mechanical, percussion sounds like some foreign alarm to usher in a dreamscape not unlike Alice in Wonderland at the same time that weightless buzzes and cries fly by with symphonic precision and determination. Of course, the neon bubbles and chain-smoking caterpillars can’t be far behind. It’s fitting that when Chad VanGaalen finally unleashes the titular question, all sorts of alien sounds push and shove their way through the background in order to be both seen and hear: no, really — where are you?

That question in and of itself should be kind of terrifying and, like most of Shrink Dust, it kind of, sort of is. However, there’s something so earnest and sincere about Mr. VanGaalen’s imagination so that the danger never feels palpable. The monsters that adorn the album’s cover are gruesome in looks only; they still feel love and sadness and go on nervous first dates to the local cinema or bowling alley (probably). Either way, there’s an almost opaque sense of other to this world that makes deciphering the album for any sort of deeper meaning obsolete. Just enjoy the ride while you’re here.

And what a ride it is. VanGaalen has gone on record in calling Shrink Dust a country record, but that hardly seems fair. There are twangs and steel pedal guitars and, yes, even harmonicas, but the end result sounds never feels confined to whiskey jars and rocking chairs. Instead, like last year’s excellent MCII by Mikal Cronin, Shrink Dust feels like a record unstuck in time and will be destined to become the soundtrack to many beach-filled days and bonfire-lit nights. Only, you know — weirder. “Evil” is compelled to watch the waves roll on by, while “Leaning Bells” gets up off its ass to play some Frisbee.The songs flow together effortlessly, to the point where it’s a little difficult to tell when one ends and another starts. While that may sound like a swipe, it’s really a testament to how realized Chad’s world really is. If you want heartbreak, you can certainly find it in “Lila”; if you want self-loathing, there’s “Monster”; if you want an anti-war anthem, there’s probably “All Will Combine.” Really, Shrink Dust puts out what you put in.

The album ends with the ridiculously titled “Cosmic Destroyer,” which sounds like something a Dave Mustaine wannabe in high school would come up with. While there aren’t any blazing guitar solos or unrelenting percussion, it’s a surprisingly appropriate title. Odd noises shoot by the ears at light speed over lullaby melodies; the dream is ending, or maybe it’s just beginning? Either way, this cosmos is being destroyed and giving way to another sort of reality. Chad’s last lines are “And you don’t have name/but you’ve been called so many different things”; it sounds like a mixture between an apology that the ride’s over, and a promise that it will always be there waiting to be explored again.