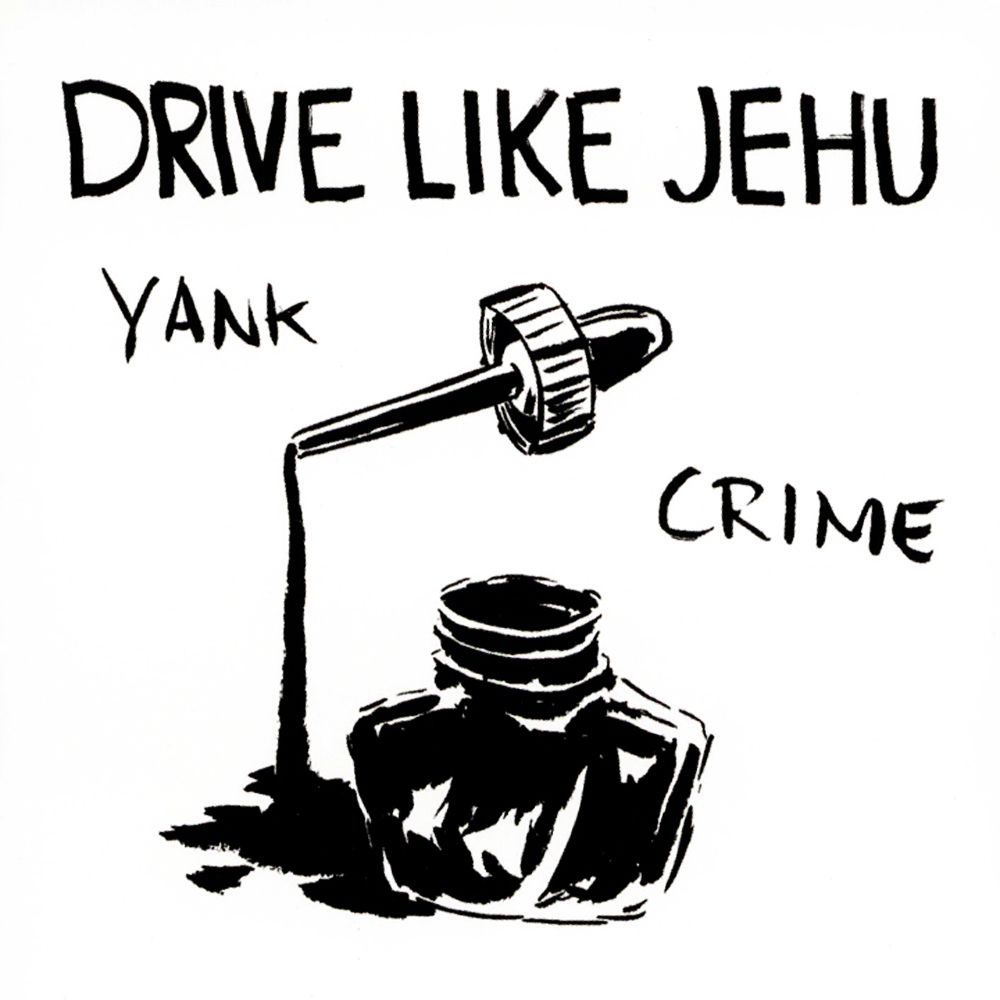 Drive Like Jehu guitarist John Reis once described his motivations succinctly: “I have this continuous need to have my head filled with noise…specifically the noise I make.” He’s made a lot of noise throughout his career, from the more radio-friendly crunch of Rocket from the Crypt to the shorter, sharper punk anthems of Hot Snakes to the minute-long garage rockets of The Sultans. And no noise he made roared louder than that of Drive Like Jehu, a post-hardcore band of Biblical proportions—literally (sort of). The band named itself after a passage from 2 Kings 9:20: “And the driving is like the driving of Jehu the son of Nimshi, for he drives furiously.” And dear god, did they drive furiously.

Within Drive Like Jehu’s brief discography, their most furious moment arrived with the release of 1994’s Yank Crime, their second and, to date, final album. It’s a record (or rather an LP and a bonus 7-inch) that opens with maximum force and intensity, testing the listener’s endurance without ever offering the opportunity to catch one’s breath. It’s overwhelming. Even by the standards of punk and hardcore, few albums by the mid-’90s arrived with such an unrelenting presence, not to mention a disorienting one. Reis and Rick Froberg’s guitars scrape against each other with aggression and agility, their riffs sustained and even drawn-out to a degree that at one time might never have been considered punk at all. But when they reach that climactic moment, backed by the driving rhythm section of bassist Mike Kennedy and Mark Trombino, it’s a cathartic release that few other albums can provide.

For these reasons and more, Drive Like Jehu have been called everything from “emo” to “screamo,” none of which ever really made much sense. When their noise first erupted out of San Diego in the early ’90s, nobody was making anything that sounded like it. Not Fugazi. Not Quicksand. Not even The Nation of Ulysses, though their explosive, satirical style arguably came closest. With Yank Crime, however, Drive Like Jehu perfected a musical direction that had begun much earlier, back when Reis and Froberg were in the similarly loud but not nearly as complex Pitchfork. Pitchfork, ironically, did sound more characteristically emo in that their closest contemporaries, sound-wise, were Guy Picciotto’s proto-Fugazi pioneers, Rites of Spring. The few recordings they were released were mere sketches of what was to come, but they provided an important beginning to a friendship and musical partnership between the two musicians that’s continued up to the present, most recently with Hot Snakes’ new album Jericho Sirens.

“I’ve known [John] since like 1986 and we were in bands right away,” Froberg says. “He liked all the stuff I thought was cool, and we have the same taste. I always like what he does.”

The other half of Jehu’s sound came from Kennedy and Trombino, who had each played in the band Night Soil Man before joining. Night Soil Man was cut from a similar cloth as Pitchfork—most of the bands in San Diego in the late ’80s and early ’90s were experimental mutations of hardcore to some degree—though their compositions were longer, a bit more epic and soaring. They were also considerably more metallic than the sound that Pitchfork had cultivated, though that heaviness and knack for building up more massive song constructions helped to form the core of what Drive Like Jehu did best. And though Jehu’s self-titled 1991 album was their proof of concept, delivering some utterly crushing dirges in “Atom Jack” and “If It Kills You,” it was three years later that the band refined that sound into the brilliant, skin-peeling post-hardcore diamond it was.

The first sound on Yank Crime, is the tense, percussive rumble of Mike Kennedy’s bass, followed shortly by the whir of tenuously imposing feedback. It’s pretty clear from the open of “Here Come the Rome Plows” that something big is coming, though before one can muster an educated guess, it barrels into overdrive, careening with white-knuckle forward momentum in a harsh and disorienting 5/4 tempo. And it’s always teetering on the verge of either transcendent glory or total chaos; “Here comes, here comes,” Rick Froberg shouts, as if to prepare the passenger for the hundred-foot plunge before them: “Rome plows!!!”

It was in the lengthier, more rhythmically complex tracks where Drive Like Jehu performed at full strength, however. For as much aggression and drive as they displayed in a track like “Rome Plows,” their symphony of jagged moving parts on “Do You Compute?” revealed a side of the band that was as concerned with the dynamics of counterpoint and the complexities of composition as they were with kicking ass (which they still did). And “Luau,” the greatest single-song achievement on the album, stretches out into nine minutes of tension and dizzying churn, Reid and Froberg’s double-helix guitar riffs intertwining in a beautifully brutal arrangement. Pinback’s Rob Crow (then of Heavy Vegetable) shows up to yelp “Suit up!”, though the glory of the song is in how the band so gracefully orchestrates abrasion and agitation.

“I equate building tension with repetition,” Reis says. “But also certain dissonance…certain notes that rub against each other in different ways. And having a musical resolve. With Drive Like Jehu, we had the real estate and the time to build up to a thing, and then we did the thing. And you’re like, ‘oh, there it is.’”

There are shorter songs on the album, more direct and potent hits of Jehu’s vertiginous sensibility. “Golden Brown” is one, a high-speed ripper that found its way onto Hot Snakes setlists a couple years before Jehu got the bug to get back onstage. “New Math” is another, preceded by a three-minute intro track and propelled by time-signature shifts that interrupt its momentum with whiplash breakdowns and Froberg’s screeches of “You’ve been had!” It’s in these kinds of songs that Froberg, himself, finds a stronger preference, his career since Jehu (Hot Snakes, Obits) more rooted in the concise dynamics of punk and garage rock.

“I listen to more CCR than Glenn Branca,” he says. “I just like a good, old-fashioned song. I do like music that’s more exploratory, that’s great, but the stuff that makes you happy to be alive, it’s just songs, 1-2-3-4 verse chorus bridge.”

With the exception of maybe “Human Interest,” one of only three proper songs under five minutes long, nothing on Yank Crime sounds like it belongs on the radio. Maybe that was never the point, but the band was specifically sought out by Interscope—big-time major label responsible for releases by Nine Inch Nails, Dr. Dre and Helmet—who released the album in 1994. It’s certainly not the weirdest major label partnership to happen in the ’90s, but it’s up there. Reis’ other, more accessible band Rocket from the Crypt also signed with Interscope and ended up releasing three albums through the label, but they weren’t the band that caught Interscope’s ear, which has led to a longtime misunderstanding about how Yank Crime was given such a prominent platform.

After the band finished touring behind Yank Crime, Reis got right back to work with Rocket from the Crypt, releasing their album Scream, Dracula, Scream in 1995. That album yielded a handful of 120 Minutes-aired videos as well as radio singles including “On A Rope” and “Young Livers.” It’s understandable to make the mistake of thinking that Interscope’s first priority was Rocket—they were the band that actually sounded like they fit in alongside the more mainstream alt-rock bands of the day. They weren’t grunge, but they wouldn’t be kicked out of the party either.

And then, for Drive Like Jehu, nothing happened for nearly 20 years. They didn’t break up, technically. In the absence of any real information, that would have been the safe assumption, especially since Froberg eventually moved to New York (though that didn’t get in the way of Hot Snakes). Reis stayed busy with Rocket from the Crypt, while Trombino began a busy career behind the boards, producing records by the likes of Jimmy Eat World and Finch, not to mention a long list of other influential underground San Diego bands, including No Knife, Pinback and Inch, before opening a donut shop in L.A. Kennedy, however, moved away from music for a career in chemistry. In the absence of any official statements or widely disseminated information, the band’s absence created an air of mystery and legend—the kind of myth that the truth could only deflate. But the truth is they simply just never figured out how to keep the bullet train moving forward.

Drive Like Jehu turned down a sizable sum of money in an offer to reunite at Coachella in the early ’10s, though eventually they changed their minds, convinced to make it happen for the sake of doing so with one of the largest musical instruments in the country. In 2014, the band played their first show in nearly 20 years in San Diego’s Balboa Park, accompanied by Dr. Carol Williams, San Diego’s municipal organist seated at the 75-foot tall Spreckels Organ. Its sound almost medieval, the organ comes to life like a dragon awakened from its slumber, breathing fire into five of the band’s lengthiest dirges, including “Luau” and “Do You Compute.” It took that mythical beast—that utterly peculiar and ornate backdrop—to bring Drive Like Jehu back to life, however brief it was.

“We never actually did break up,” Reis says. “It just—we went so long without practicing or seeing each other or doing anything that there was almost a level of embarrassment. Like ‘I don’t know what this is.’ I’m sure a lot of it had to do with my own schedule of being busy with Rocket, so when we started playing again—I have to speak for myself—it took me a while to get back into shape.”

“When we were doing that it was weird, because it was like…this band broke up in 1994, and we’re playing again and I’m not 23 anymore, or whatever I was,” Froberg says. “We had to kind of make adjustments to feel comfortable with it now. And in doing so, we wanted to build things about it.”

A year’s worth of touring continued for the band, and they did eventually make an appearance at Coachella. But much like the first time, Drive Like Jehu quietly winded down again, each member focusing on their own individual work or projects, Reis and Froberg continuing to work together in Hot Snakes. Jehu may or may not furiously drive again, but Reis is more optimistic about the future, however uncertain it might be.

“I felt like we were still getting better and better,” he says. “It’s almost not for me to say. Nostalgia’s pretty powerful. It’s a behemoth to overcome. People still hold things precious. There’s a tendency that, when it happens to you, it’s important. We were definitely having more fun. It was a bit looser, but in my opinion if we were like that as kids…then the band would have lasted longer.”