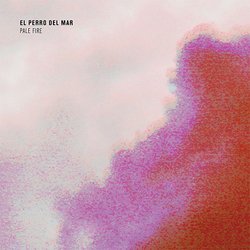 Sarah Assbring’s work as El Perro del Mar has always been marked by intimacy and catchiness, the latter the lure, the former the surprise waiting at the core of her best songs. Intimacy in a pop song can be absurd and unpalatable, but it can also be magnetic, or, perhaps more substantially, keep a listener company when another person’s presence isn’t the kind of company needed. It can also be the root, or one of the roots, of obsession, as in the case of Elliott Smith, for instance, although I get the feeling that such obsession has gone out of fashion, and, from the little I have read, the obsession that Sarah Assbring seems to attract is stalker-like and male, as well as appreciative and human. While I myself have never been obsessed with the intimacy displayed in her songs, I have appreciated it in many of them, and some (“Dog,” “Change of Heart,” “How Did We Forget?”) feel like comforting friends I am never likely to wholly forget.

Pale Fire continues, while altering the sound of, Love Is Not Pop‘s flirtation with dance music. Love was produced by Studio’s Rasmus Hagg (who is credited with additional writing on four tracks here), whereas this time around production is handled by Assbring herself. Both records have a Balearic feel, but the beachy disco bounce of much of Love is supplemented and at times replaced on Pale Fire by sounds adopted from early ’90s house and trip-hop. The first single from the record, “Walk on By,” is exemplary on this count, its buoyancy propelled by elements that sneak in one at a time as it snakes its way onward. It has the feel of former profligacy repented, a lesson learned that will likely be learned again, a dark corner carved out of a sunny paradise.

The first half of the record feels uniform, and while it’s enjoyable enough for its blend of tropical atmosphere, crossed here and there by more nervy synthesizer melodies, none of the songs really stick with me as songs. The last five tracks, on the other hand, cover quite a bit of ground, from the wound down house melancholy of “Walk on By,” to “Love in Vain”‘s charming dub pop, the darker synth-pop, somewhat reminiscent of Fever Ray, of the excellent “To the Beat of a Dying World,” and the balmy farewell given wordlessly by the chilled and chant heavy house groove of “Dark Night.” There is also what is probably my favorite song on the record, “I Was a Boy,” which has the sort of resonant but vague lyrics that filled her first album. It’s a story told in an atmosphere of calm, the kind of beautiful nonsense that makes dreams fascinating, where one can be born a sailor or solider as the sea rolls past her shoulder, or have been a boy when, judging by her voice, she has quite clearly, and compellingly, become a woman.

Pale Fire is, like its predecessors, concerned with love, but maybe the concept of love is a bit broader in this incarnation. Assbring has spoken of pale fire, as she understands it, as that which returns hope and the possibility of joy at moments when these precious commodities had seemed to have been all but exhausted. While “I Was a Boy” seems to me to capture that wonder, I’m not so sure about the rest of the record. The title song that opens the record suggests that it is a matter of belief, that in believing in the pale fire (of life and creation) its recurrence remains possible. To believe in the possibility of being startled anew is already to inhabit a way of being, an openness, in which that can come to be. I suspect that this record, heard at the proper moment, could indeed occasion its own share of wonder, but I am yet to experience it as such. Perhaps, like much of her other work, it will simply take some time for that sort of intimacy to develop.