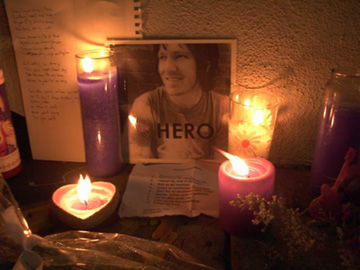 My thoughts have been disjointed lately. I haven’t been able to hold onto a single train of thought for more than a few minutes. When I sat down to write this article, multiple times, I was unable to come up with one cohesive idea to write about. And so, this article might seem patchy, incoherent, and messy.

This is what becomes of profound loss.

The day I heard that Elliott Smith had committed suicide was a day spent in a shock-born fog. All I could do was to try to find everyone I knew who was a fan so that I could relay the news. It just seemed so wrong. And as is always the case with news that is spread from person to person, the rumors flew. It wasn’t until the next morning that I made a terrible mistake. After showering, getting dressed, and packed for work, I headed to the CD rack as always. With the best intentions I grabbed Roman Candle, Elliott Smith, Either / Or, XO, Figure 8, and the Good Will Hunting soundtrack. I started with the latter. Danny Elfman’s orchestral treatment of “Between the Bars” wafted through the speakers as I drove down Aurora to downtown Seattle.

“The potential you’ll be that you’ll never see, the promises you’ll only make. The people you’ve been before that you don’t want around anymore that push and shove and won’t bend to your will, I’ll keep them still.”

Oh God. I started to wonder if maybe I should have just hit the FM button and listened to NPR instead. I kept listening. “Angeles” and “No Name #3” went by. I started to remember the times when I wished that a particular girl would return the feelings that I had for her. “I could make you satisfied in everything you do.” Now I not only felt the loss of a great artist, but I started to feel things from my own past that I had let go.

The original version of “Between the Bars” came on and I quickly skipped it. I couldn’t listen to those particular lyrics again and hold it together. The entire night before, I had been visiting different web sites that each had articles on Elliott’s death. All of the information came flooding into my head, especially his struggles with heroin addiction and the recent ideas that perhaps he had lapsed back into that addiction.

Then “Say Yes” started to play. This song means and meant a lot to me. The first time I heard it was after I had moved back to California from Delaware. I had just ended a year long relationship with a girl I had fallen hard for. Despite all of the things we shared and how much we knew we loved each other, neither one of us were willing to make the kind of commitment that was necessary to keep the relationship going. She wasn’t willing to be exclusive to me, and I wasn’t willing to stick around, driven by nothing but hope. I couldn’t stay in Delaware, in that apartment that held so many memories. What if it didn’t work out? Everything else in that godforsaken swamp state would serve as a reminder of her and how I was second best.

One thing I learned, moving from California to a place that snowed, was the hibernation habits of crickets. As winter descended on the East Coast, my apartment became overrun with crickets. They were everywhere. They broke into the apartment through cracks in doors and walls. They were trying to escape the cold to find solace in my warm bachelor pad. Once the snows came, the crickets froze up. They would stay frozen under the snow until spring arrived, and they would slowly come back to life. I didn’t care at the time. I just wanted the damn crickets out.

Getting back to my original point, the song “Say Yes” is about a break-up and how, over time, one gets over heartbreak. At the time, every word was a document of my pain, especially “they want you or they don’t. Say yes.” But I also had a moment where I misunderstood one of the words and it still meant something to me. “Crooked spin won’t come to rest” became “Cricket spin won’t come to rest.” What the hell? Did he know exactly what I was going through? The worst of it came when I replaced Good Will Hunting with Elliott Smith. “Needle in the Hay” became the song that put me over the edge and forced me to pull my car over to the curb of Seventh Avenue, less than a mile from my destination, as I couldn’t stop the tears.

I sat there in my car in the quiet morning, hours before the city would truly come to life with people and traffic and industry, wiping tears from my eyes and now fully realizing that he was gone, and it was most likely a result of his struggles with the drugs that he sang about in this album’s songs. My brother had just sent me a preview of one of his new tracks entitled “A Distorted Reality is Now a Necessity to Be Free”. I was going to experience more Elliott Smith music! It had been three long years since Figure 8, and I needed to hear more music and lyrics from the man who moved me so often. Now I realized that every lyric would seem something else, would take on a new definition with his suicide. Take for example the entire song “Pitseleh”, one of my absolute favorites, and another one I used to ease the pain of heartbreak, now forever changed in my mind.

I’ll tell you why I don’t want to know where you are
I got a joke I been dying to tell you
A silent kid is looking down the barrel
To make the noise that I kept so quiet
I kept it from you, pitseleh
I’m not what’s missing from your life now
I could never be the puzzle pieces
They say that god makes problems
Just to see what you can stand
Before you do as the devil pleases
And give up the thing you love
But no one deserves it
The first time I saw you I knew it would never last
I’m not half what I wish I was
I’m so angry
I don’t think it’ll ever pass
And I was bad news for you just because
I never meant to hurt you

Everyone I know can easily make up a list of the acts they have to see before they die. Mine consisted at one time of David Bowie, Prince, Nirvana, and I have since added Coldplay. I got to see an amazing three and half hour set by Mr. Bowie at the Electric Factory in Philadelphia in 1997. I was privileged to see his purple badness at the Tower Theatre in Philly in the same year. I still haven’t seen Coldplay. And then there’s Nirvana. Little did I know that Kurt Cobain and company should have been itemized on a separate list: Acts I have to see before they die. The awfulness of that idea is that unlike aging bands like The Stones and The Who, there are some artists that can be and are taken from us too soon.

I could never speak as eloquently as some about Jeff Buckley or Kurt Cobain. I discovered Jeff, like most people, after his death, and thus the blow was softened by the foreknowledge of his tragedy. Kurt Cobain never spoke to me like he spoke to many people my age and younger. I was not as angry or as alienated as he felt. Don’t misunderstand me, I remember exactly where I was when I heard the news of his death, and it did affect me, just not as much as I thought it would have.

There are very few artists who I have been able to relate to through their lyrics. Although I love R.E.M., most of Stipe’s lyrics are a mish-mash of ideas that mean little to anyone but him. Some artists are extremely specific in their choice of words so as to leave little room for interpretation. Others are so vague as to defy true meaning. Good poetry is that which is written to evoke emotion amongst a variety of people. Elliott Smith was just such a poet.

It hurts me to know that he might not have understood just how many people he touched so deeply. Maybe that knowledge would have made a difference. We’ll never know. There was a great review in “VH1’s 100 Greatest Albums of All Time” book about Jeff Buckley’s Grace. It started by saying (and I’m paraphrasing, sorry) that by merely mentioning the name Jeff Buckley, you can spot fans quickly. They are the ones that get that twinkle in their eye and a sad look on their face at the same time. “They own Grace“, it said.

The same is true for Elliott, but not for a particular album. Each fan has his or her favorite song. For me, it’s “Pitseleh”. For some of my friends, favorites include “Angeles”, “Needle in the Hay”, “Waltz #2 (XO)”, “Miss Misery”, “Ballad of Big Nothing”, and “Division Day”. Janet Weiss, drummer for Sleater-Kinney, once said in an article for SPIN magazine that while playing for Elliott on tour, she couldn’t get through “Ballad of Big Nothing” without tearing up. Frank Black once said that if he needed to let out a good cry in a therapy session, he would listen to “Needle in the Hay”. If you mention that one song that has touched someone’s heart, the twinkle comes to their eye, their head kind of tilts to the side, and they sigh. Elliott has touched them.

I have been trying to start each one of my “Truly Great” articles with a quotation by the artist I am writing about, and I found so many great ones (including an entire song’s worth) that I decided just to mention them in the body of the article. There are far more than those and every fan has their favorites. These are mine. I don’t know if I’ll ever be able to listen to his music in the same way ever again. But it’s still soon after, it still hurts too much right now, and there’s lots of time to heal.

Thank you, Elliott, for changing our lives.