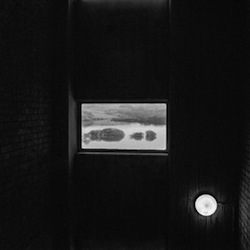 Emptyset’s latest release, Material, like much of the duo’s output, leaves me thinking about the boundary between sound art and music. This is certainly a boundary that is made and remade. It exists neither in space nor time, but the contemplation of it opens onto numberless chains of strange and perhaps useful thoughts. A central tenet in my understanding of this boundary is that sound art is addressed to the ways we listen, it is as much about making us hear in a different way as it is about itself. Music, on the other hand, can be seen as imposing itself on the listener; it is a world of sorts that we briefly inhabit or ignore, whereas a piece of sound art is a door to thinking about the action of sound upon our bodies and minds: what does it do, and what can it communicate? This is a working hypothesis for the remarks that follow.

Emptyset’s work sometimes verges on the musical. A good example, I think, is “Collapse” from their last EP, for Raster-Noton. It eventually takes on a steady beat around which wreckage of white noise and droning pulses collects, particles and passages of which veer off in all directions. Material is more austere. It is a different sort of project, one which is interested in both the ways that sounds are shaped by spaces, and the ways that sound can be used to take an imprint of a space.

Each piece was recorded in a different locale, which gives its name to the recording. The first is from Trawsfynydd Nuclear Power Station, a site that formerly housed a uranium reactor, which is in the process of being decommissioned. This recording soundtracks a film installation made of the location for Tate Britain. The second track was made in Ambika P3, a bunker beneath Baker Street in London, where tests for sections of the channel tunnel and British motorways have been conducted. The final piece on Material was made in Chislehurst Mine, in Kent, a 22-mile network of tunnels carved out from the middle ages into the early 19th century.

These places speak through the particular resonance they give to the sounds produced by Emptyset within them. Obviously, the likelihood that anyone would recognize these places by way of these recordings, through the particular sound space that they articulate and evoke, is almost non-existent. Knowing where they were recorded though, my mind begins its journey from an intersection between the idea of a place and the document presented on Material that accords to it. Or, rather, such a journey begins in the space between these two things, which are connected, but which are only so because I know them to be.

A drawn out bass-heavy tone, frazzled at the edges, a solid thrum that evaporates and sheds reverberations. The space is detailed in such reverberations. What can the act of listening tell me about the history of a space, which is encoded in its size and shape? What one connects such acts of listening to is hardly determined, but ideas clustering around the desertion and obsolescence of industrial structures in the present give these sounds a core both melancholy and obliquely threatening. The sounds themselves almost exclusively communicate the latter. It is their echoes, their breaking-downs, that contain the seeds of melancholy, a type of melancholy that lies abandoned structures that were once seen as part of life, but which contain in them the histories of projects that also put it squarely in harm’s way.