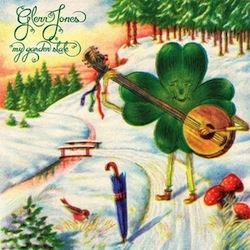 Though it’s often overshadowed by it’s northern neighbor, New Jersey has proven just as prolific a source of pop culture inspiration as the decidedly more mythic, glamorous New York. It’s an area rife with tales of the supernatural, whether it’s the oft-cited Jersey Devil (which formed the basis of an episode of the X-Files) or Clinton Road, infamous for its lore of demon possession. Jersey was the backdrop of The Sopranos, Friday the 13th, and essentially every Kevin Smith film. But musically, New Jersey has been a bigger source of inspiration than any other of the lower 48, save for New York, California and, possibly, Texas. Titus Andronicus, Bon Jovi, The Wrens and Bruce Springsteen have been quite prolific at giving the Garden State its due, just to name a few of its more notable poets. With fifth album My Garden State, however, guitarist Glenn Jones is continuing this tradition, but doing so with a much more personal twist.

Jones, a guitarist in the tradition of American Primitivism pioneer John Fahey, grew up in New Jersey, having moved there with his family in 1966. And he wrote My Garden State in his childhood home, while caring for his Alzheimers-stricken mother. And the complex mixture of joy, sorrow and nostalgia that comes with the backstory and context behind the album lends it an extra emotional resonance. The banjo-plucking clover on the cover — which is the latest in a series of musical flora and fauna in Jones’ discography — might give the suggestion that this is essentially a happy hoedown, but it’s a bit more complex than that. Yet it’s also far from a woeful or depressing album, for that matter.

Through his varied approaches to performing and songwriting, Jones encapsulates a wide range of emotions. The banjo melody that drives first track “Across the Tappan Zee” is fit to be accompanied with a sepia filter, its old-timey sounds evocative of a time that has long since faded. A reflective quality overtakes much of the middle section of the record, which is most significant and stunning on “The Vernal Pool,” which picks up momentum as it goes along, yet retains an autumnal feel in its stark, minor-key arrangement. And there’s an upbeat, sweet sound to “Bergen County Farewell,” which doesn’t so much lighten the mood of the album as open up its heart significantly.

As My Garden State is entirely instrumental, the landmarks that Jones cites are more symbolic than anything, though they quietly speak volumes about the emotions and personal context that they hold for the musician himself. There are lots of pins on the map — East Montgomery, the Tappan Zee, Bergen County — though the most significant is “Alcoeur Gardens,” which is actually an Alzheimer’s and elder care facility. While the listener isn’t likely to grasp the full spectrum of emotions contained therein, what’s most remarkable about the album is how much care Jones takes in creating something beautiful and meaningful. His playing style can be either sparse and gentle or highly energetic, but the weight it carries is powerful well beyond its stripped, simple approach.

Jack Rose – Luck in the Valley

Glenn Jones : Against Which the Sea Continually Beats