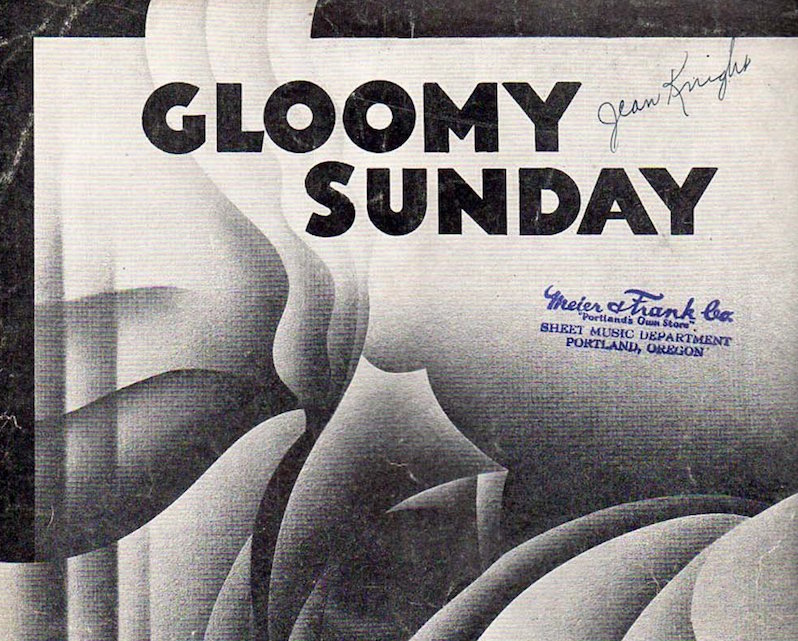 Hungary has the dubious distinction of having given birth to two of the most prolific, cruel and remorseless figures to fit the profile of a serial killer—even before the term had been coined. One is Erszebet Báthory, a sadistic noblewoman who used her status to bring cruel and horrific torture and punishment upon untold sums of victims (anywhere between 100 and 650), and whose eventual, increasingly outlandish legend saw her bathing in the blood of her victims to ensure her eternal beauty.

The other one is a song.

That song, “Gloomy Sunday,” came to existence during one of history’s bleakest moments. Written in 1933 by Hungarian pianist and composer Reszõ Seress against the backdrop of the Great Depression and an increasing fascist influence in Hungary, and originally recorded in 1935 by Pál Kalmár, the song is something of a plea for mercy as humanity is at its worst. Seress’ original published lyrics were titled “Vége a világnak,” or “The World Is Ending,” and reflected a growing sense of horror and despair at the state of the world. A key sample lyric translates to “Meadows are coloured red with human blood/There are dead people on the streets everywhere,” just to give a frame of reference for the level of darkness that Seress’ composition harbored. No wonder it’s been blamed for anywhere between 17 and over 100 suicides.

To hear “Gloomy Sunday” is to be blanketed in tragic beauty. The song’s minor key melody is at once incredibly catchy and ominously dark, crafted to evoke a sense of despair that transcends language. While Seress’ song became an international hit, eventually being recorded by Billie Holiday in what’s now probably the most famous version of the song, one need only hear the emotion in Kalmár’s gently aching voice to know the pain behind the verses. (Not to mention the vintage crackle of the nearly 90-year-old song gives it a particularly ghostly quality.) Yet its origins stem from something as simple as a breakup, Seress having written the song after the end of a relationship. That the song delved so deep into such harrowing personal feelings initially proved to be an obstacle for the songwriter in his attempt to have it published. One publisher reportedly said, “there is a sort of terrible compelling despair about it” about his reluctance to publish the song.

And yet, in spite of this, “Gloomy Sunday” eventually became a hit. More than that, it became a standard, recorded in many languages by countless artists, including Billie Holiday, Sinead O’Connor, Mel Tormé and Sarah Vaughn. But to hear the lore about the song, it’d seem to have some kind of sinister power over the people who hear it. It’s not even corporeal, but it has a massive body count. Some of the various accounts of its supposed, morbid misdeeds include: a shoemaker whose suicide note quoted the song; a girl in Vienna drowning while holding its sheet music; a man who shot himself after telling loved ones the song wouldn’t leave his head; a woman in London who overdosed while listening to “Gloomy Sunday”; sheet music was found in the apartment of a shopkeeper in Berlin who hanged herself—the list goes on, and those are only the apocryphal accounts that have managed to live on in the near-century since the song came into being. It’s a merciless fiend of a song, almost supernatural, like the video in The Ring you see before you die. Which, perhaps, makes my repeated listens to the song over the past week ill-advised. If it did, in fact, cause the carnage attributed to it.

Because of the epidemic of suicides in the aftermath of the song’s release, and possibly because of it, Hungarian authorities supposedly discouraged broadcast of the song. A more extreme version of the song was that it was banned, and an even more extreme one yet was that it was even banned in the US and UK, where its popularity spread. None of this, at least according to Snopes, can be corroborated, but it’s entirely understandable if broadcasters and the government were a little on edge because of what they were hearing. And to be fair, it is a mournful song. Gloomy, even! It’s not at all surprising to hear that deathrock icons Christian Death later covered it or, for that matter, doom metal band Pallbearer, whose version is actually quite stunning. But it does take a certain frame of mind to hear this song and not feel a sense of dread. “Terrible compelling despair” doesn’t seem at all exaggerated in describing the song, though that doesn’t mean it’s bad. It’s quite pretty, and its earliest versions, particularly in the original Hungarian, are utterly haunting.

In some sense, the monstrous stories about “Gloomy Sunday” wreaking havoc seem to be a distraction from the genuine sadness surrounding the song. The landscape in which it was released was one of the darkest of the 20th century, as prosperity declined and iron-fisted hateful authoritarians rose. And we’re in a landscape now, globally, that mirrors the era in too many ways. And Hungary, up through the ’80s, had one of the highest suicide rates of any country in the world, which suggests that “Gloomy Sunday” was merely a reflection of the despair that surrounded it, rather than its cause. Most tragic of all, however, Seress himself dying after jumping off of a building in Budapest in 1968, which makes it the sole concrete connection among all of the stories out there. (There is also a story about the woman who broke up with him, initially inspiring the writing of the song, dying herself after hearing it, though there’s no evidence or documentation of this, just secondhand telephone games with the dead.)

Given all the baggage that “Gloomy Sunday” carries, it’s a song that’s easier to analyze than enjoy. Can one simply listen to a song that’s supposedly such a powerful, overwhelmingly dark presence without context. Can it be enjoyed for what it is? It can, possibly. But with the flood of information that’s already been disseminated, there’s more context than song, at this point. In 2019, it can’t be separated from its reputation as “The Hungarian Suicide Song,” for better or for worse. To hear it, however, it’s impossible to shake the lingering eerie feeling that it leaves with you. Beware of its hitchhiking ghosts.