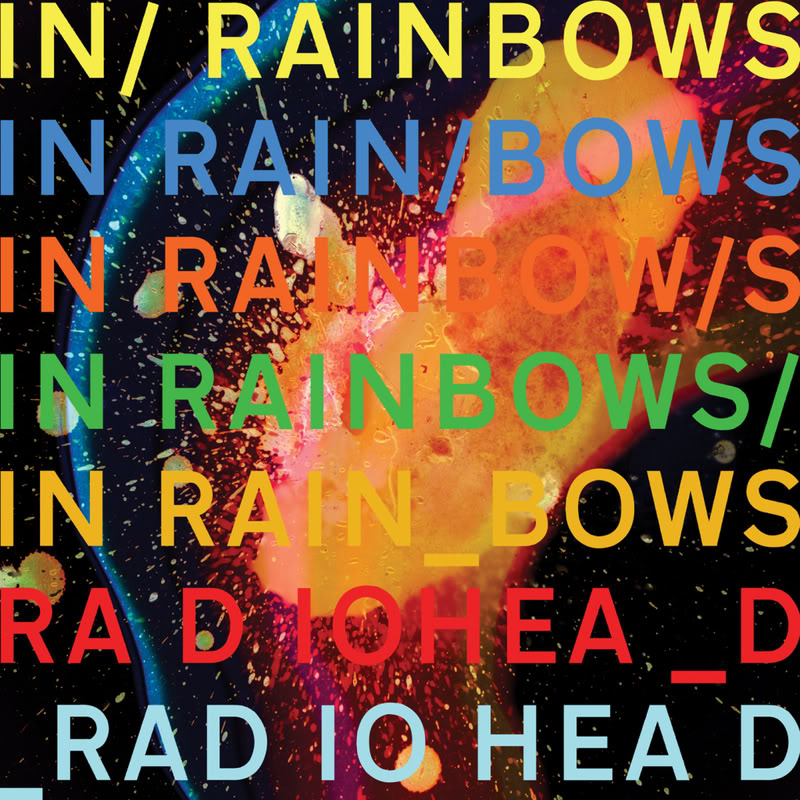 The album as a public event—it’s an idea that had already started to die about the time of Treble’s inception in 2003. It sounds strange in today’s world but I have vivid memories of walking to the local record store with a group of friends so we could each purchase a copy of Pearl Jam’s Vitalogy on the day of its release at the end of ‘94. But by 2007, the idea of Tower Records staying open until midnight on Tuesday morning for say, the latest U2 record seemed utterly quaint (not to mention the fact that Tower Records had just filed for bankruptcy the prior year). And yet, with the release of Radiohead’s at-first digital-only In Rainbows, there was opportunity for a kind of event that hadn’t even been a possibility in the ’90s. Everyone with an internet connection had access to the album at the same time. It was then possible to share initial reactions with people across the world instantly. Perhaps it speaks to my one-track mind more than anything else, but it seemed like everywhere I went I was having conversations about this album. And it wasn’t just the way the album was released that made it such an extraordinary thing. Although they couldn’t by any stretch please everyone, here was a Radiohead album that seemed to excite fans and non-fans alike.  There was clearly something special about it, even in a catalog as formidable as theirs.

Few albums in the last ten years had been talked about so much prior to their release as this one. The week the album was announced, publications were posting guides to what In Rainbows would likely sound like. The band members themselves had been dropping hints at the direction the album was taking throughout the years they were recording it. There was talk that it was both embarrassingly sparse and extremely lush. Jonny Greenwood had spoken of how he had become obsessed with dub, there were photos of Colin Greenwood recording a large group of children; peculiarities abounded and they were all blogged about ad nauseam.  And yet, they all sort of made perfect sense in that first listen. You could see how at times the band was exercising great restraint, leading to some pretty sparse moments. “15 Step” and “Reckoner” both use bass awfully sparingly. Likewise, as “Nude”’s cascading intro fades, Yorke’s voice is supported by nothing more than the rhythm section. And these moments are consistently augmented by exceedingly lush crescendos. By the time In Rainbows was announced there was so much in the way of expectations that it seemed it couldn’t possibly live up to them and here I was one listen in and I felt like it already had. 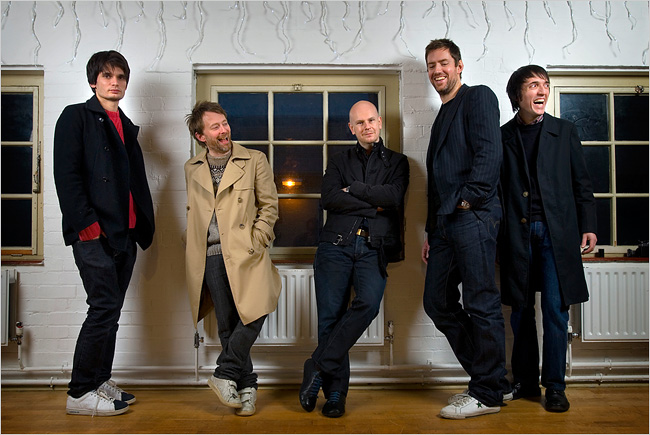 October 10, 2007, the day that In Rainbows finally arrived, is one that will be forever etched in my memory. After waiting the entire day at work with knots in my stomach from anticipation, I rushed home, downloaded In Rainbows, burned it onto a disc, took it down to the car and headed for an aimless drive up the 101. As I popped the CD in, immediately I was struck by the sound of a band roaring back to life after a four year absence. “15 Step” seemed a bit knotty, but even one listen in I could tell I loved it. “Bodysnatchers” didn’t quite click with me that round but it would in due time. With “Nude” however, it was instant infatuation. This came as a bit of shock to me. For years I had been listening to a live version I downloaded during the Napster era and it had never really grabbed me. The version presented here was another story altogether. It was essentially the same song but the tension, drama and beauty were all heightened considerably, and Thom Yorke’s vocal performance was stunning. It’s a pristine recording that gave life to a song I had been overlooking for years. After that shock to the system, nearly every song that followed hit with equal force.

Within a few days of its release there wasn’t a song on it I didn’t love (with the exception of “Jigsaw Falling Into Place,” which I was still quite fond of). My roommate at the time had always been a casual Radiohead listener, finding it easier to admire them than to love them. With In Rainbows, he found himself in love with them for the first time. The critical reception, too, was also overwhelmingly positive. The band had been critics’ darlings ever since The Bends, but the directional shifts they took post-OK Computer proved to be a difficult one for some to accept. In Rainbows was one of the band’s most widely lauded albums right out of the gate. In a lot of respects, the album proved to be Radiohead’s most populist record. It’s not clear if the band really cared about making an amends with the early followers they lost along the way, but In Rainbows is a largely guitar-based affair. And although the band never shies away from experimentation here, overwhelmingly it’s extremely pretty music. If the spastic beats that open the record scared some initially, they actually serve as a bit of red herring as “15 Step” is really the only song that dabbles in that arena. “Bodysnatchers” is both a return to more rocking territory and a vehicle for Jonny to break out his ondes Martenot. Furthering its appeal, the band also reaches new levels of accessibility on tracks like the Beatlesque “Faust Arp” or “House of Cards,” which has an unusual Achtung Baby element to it. Who could have imagined these reference points appearing on a Radiohead album in the Kid A/Amnesiac era?

Although the record sounded like a band revitalized, the sessions for the album were, as the band put it, “a slog.” They spent quite a bit more time on it than any of their other records to date (and it’s not as though those were born that quickly themselves) and it shows; the band didn’t leave a hair out of place. But the thing that really impresses me is how each song seems to draw from a different well of inspiration. It all comes together to form a marvelous whole, but Radiohead truly seemed free to explore any rabbit hole they felt compelled to follow.

Perhaps I was entranced with the gorgeous disc box that showed up at my apartment in the weeks I was assembling my year-end list, but as the year grew to a close, I knew without a shadow of a doubt what my vote for album of the year was. It should be noted that this was the same phenomenal year that brought us Sound of Silver, Neon Bible and Kala along with several worthy others. By this point, In Rainbows had soundtracked so many late nights, social events and conversations about In Rainbows that I felt like it had a stranglehold over the last third of the year for me.

The excitement surrounding the record carried on throughout the next year with the release of the physical versions, the tour, the Grammy performance, etc.  And then, as is always the case, the world’s attention shifted away. Much has been made about the ephemeral nature of albums in the post-Napster, post-MTV, post-radio world. Records seem to come and go from consciousness at such an alarming rate that it becomes harder and harder for them to transcend the time period from which they were born. When critics ponder over the ramifications of such a phenomena, it’s easy to dwell on what’s been lost. If In Rainbows has taught me anything though, it’s just how rewarding the transition from a public album to a private album can be.

As time has marched on, several contexts for which the album used to be absorbed have subsided. New arrivals have come in to take over the spotlight, and yet, those late night listens have rarely diminished for me. To this day, it is quite a treat to don a pair of headphones, shut off the lights and get sucked into what is a comparatively insular experience. Divorced of the hyperbole surrounding its release and the painstaking work that went into actually creating it, “Weird Fishes/Arpeggi” feels like the work of casual genius as the band seamlessly incorporates several constantly shifting arpeggios in various time signatures into a beautiful narrative. Likewise, another standout, “Reckoner” builds from a chanting drum and unaffected guitar to an overwhelming climax that comes complete with a subtle string section. “All I Need” uses a similar, yet no less effective, tactic by building from the ground up with little more than a synth line.

Closing track “Videotape” seems to represent several facets of Radiohead’s career to date. First off, it’s a piano-based stunner in line with “Pyramid Song” or “Sail to the Moon.” But even more significantly, it really brings a since of closure to the record. The band has always had a way with finales. The closing track on each respective album truly does feel like the end of something. In “Videotape,” with its ruminations on death and the afterlife, it’s almost as if the end of In Rainbows signifies the end of some unspecified era. Perhaps it denotes the end of the band’s last masterpiece — that has yet to be determined — what it is, however, is a fitting ending to the quintessential Radiohead album. The band neatly sums up a career of experimentation in a compact 10-song run.

A detailed look at In Rainbows would be incomplete if I didn’t at least touch on the second disc. While I don’t necessarily equate the disc as part of the proper album — and I must admit, I don’t listen to it with nearly the same frequency — it is at least a solid companion piece. I’ve heard the claim a time or two that disc 2 contains some of In Rainbows’ best material and I would have to disagree. “Down Is the New Up,” “Go Slowly” and “4 Minute Warning” are all superb, but none of them could really replace any of the songs on disc 1. As for “Up on the Ladder” and “Bangers and Mash,” although they’re enjoyable, they’re clearly best left as b-sides  The same could be said for “Last Flowers to the Hospital” as far as I’m concerned, although I know a lot fans admire it. The brief instrumentals are great, but obviously they’re not really contenders here.

Like many in my demographic, OK Computer and Kid A both respectively changed the way I looked at music. They offered me a new ideal. In Rainbows may not be the best Radiohead album or even my favorite Radiohead album for that matter—those distinctions would clearly go to the albums I just mentioned—but it is the one album in their catalog that never seems to be affected by time. In fact, in my estimation it sounds like it could have come out today. OKC and Kid A are timeless classics in their own right but they’re also inextricably tied to what they’ve accomplished and it’s nearly impossible for me to listen to them without being reminded of how they impacted the landscape around them. Likewise, Hail to the Thief’s panic-stricken tone definitely ties it to the paranoia of the early ’00s.  While these circumstances are by no means detractions—the incalculable influence of OKC and Kid A indeed adds to their appeal—there is something liberating about listening to In Rainbows. It’s the rarity in the catalog that’s focused mainly on song craft in the most immediate and still inventive sense possible.