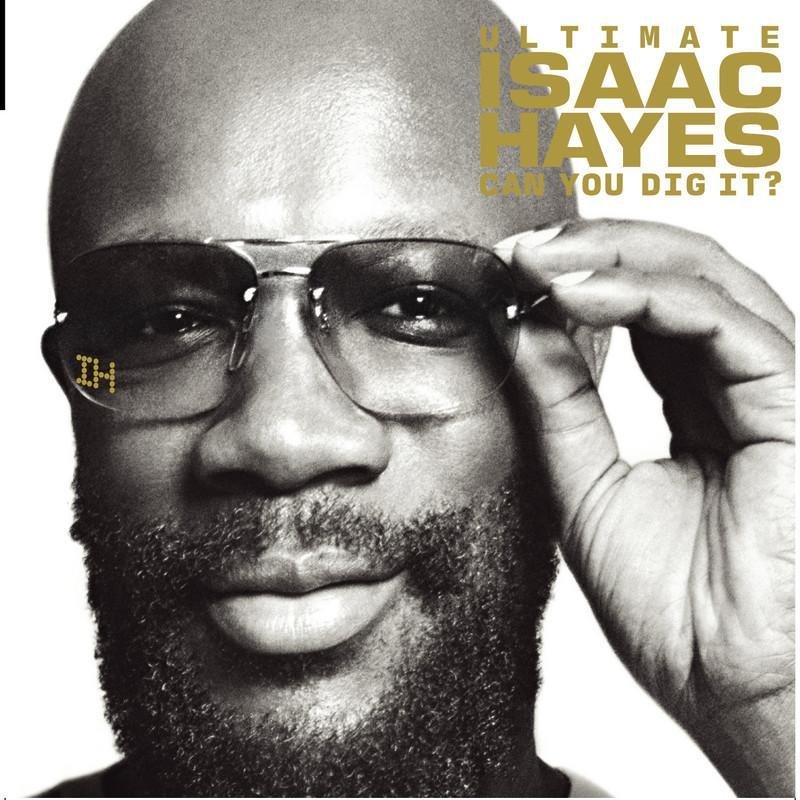 Those who had been reading Treble for the last two years have probably read both our Best of the `60s and Best of the `70s features. And some probably noted one glaring omission from both lists: Isaac Hayes. Hot Buttered Soul should have been a shoo-in for best of 1969, and Shaft should have been represented during the latter decade, even if just for its theme, which was easily one of the best songs of the decade. Somehow, we let it slip. How on earth did that happen? Ike, we hang our heads in shame. We hope you don’t take it personally. Still, we might have not noticed, had a new Isaac Hayes compilation, Ultimate Isaac Hayes: Can You Dig It?, not been sent this way.

Now, keeping in mind that Allmusic lists at least 10 Hayes “best of” comps, one might be asking himself why it’s necessary to get this one. That’s a perfectly valid and reasonable question to ask, especially considering the large pool of material out there. The short answer is that this is the most comprehensive collection to date, collecting 32 of Hayes’ classic tunes on 2 discs, with an accompanying DVD, which includes, among other songs, “Chocolate Salty Balls” from South Park. Unfortunately, that song is not on either of the audio CDs, so, if you’re interested in tracking that down, you may have to resort to the Chef & Friends album.

What these two discs do cover are a plethora of tracks spanning Hayes’ entire career, though most of them culled from his best ’60s and ’70s albums. It’s lengthy and exhausting, but meticulously compiled, as every song is a standout, with enough subtleties to offset the larger productions. For instance, the piano-driven “Precious, Precious” bridges the gap between the immortal “Theme from Shaft” and Hot Buttered Soul‘s ten-minute funk rocker “Hyperbolicsyllabicsesquedalymistic.”

What may turn off some fans is how many of the songs featured here are in edited form, as they are meant as singles, which are, in their very nature, more digestible than album tracks. For instance, the 19-minute “By the Time I Get to Phoenix,” from Hot Buttered Soul, has been reduced to seven here, still a pretty lengthy song by single standards. And “Do Your Thing,” which closed out Shaft with a 20 minute jam, is edited to a little over three here. But plenty of others, like “I Stand Accused,” which clocks in at 11 minutes, and Ike’s mesmerizing, and kinda scary, version of “Walk on By,” which runs for 12, are preserved in their original form.

Length really shouldn’t be a deterrent for most, however, as this is isn’t for those who already own all of Isaac Hayes’ albums. This is a compilation for listeners who want the best of the best, and in that respect, Can You Dig It? delivers. Slower, sexier numbers like “Soulsville” and “Never Can Say Goodbye” are to be found here, and thirty-some-odd years down the line, they still please the ears, as well as the loins. And of course, there’s righteous funk spread out all over this mother, such as the horn-centric “Wonderful,” the upbeat “Ain’t That Lovin’ You” or the groovin’ “Good Love.”

While half of the material on this collection is Hayes-penned, Can You Dig It? does include a wide range of covers, from Curtis Mayfield’s “Need to Belong To Someone” to Kris Kristofferson’s “For The Good Times” to Al Green’s “Let’s Stay Together” to three Bacharach/David compositions—”Walk On By,” “The Look of Love” and “I Say a Little Prayer.”

Of course, it would be a shame not to mention the material represented here from Hayes’ blaxploitation soundtracks. The best known, of course, are the songs from Shaft—”Soulsville,” “Do Your Thing,” and that unforgettable main theme. But there are selections here from Truck Turner and Three Tough Guys, as well—”Run Fay Run” and the title theme, respectively.

Isaac Hayes, having been a recording artist for almost 40 years (!) has a fantastic back catalogue full of unforgettable songs, many of which are represented here. Unlike many singles compilations and greatest hits albums, this one actually takes many album tracks and includes them alongside the hits, making for a balanced collection and one that truly consists of the “best,” rather than just the most popular. And though it’s a long and dizzying collection, it’s ultimately a satisfying one, which will convince the listener that Hayes truly is a bad mother. I can dig it.