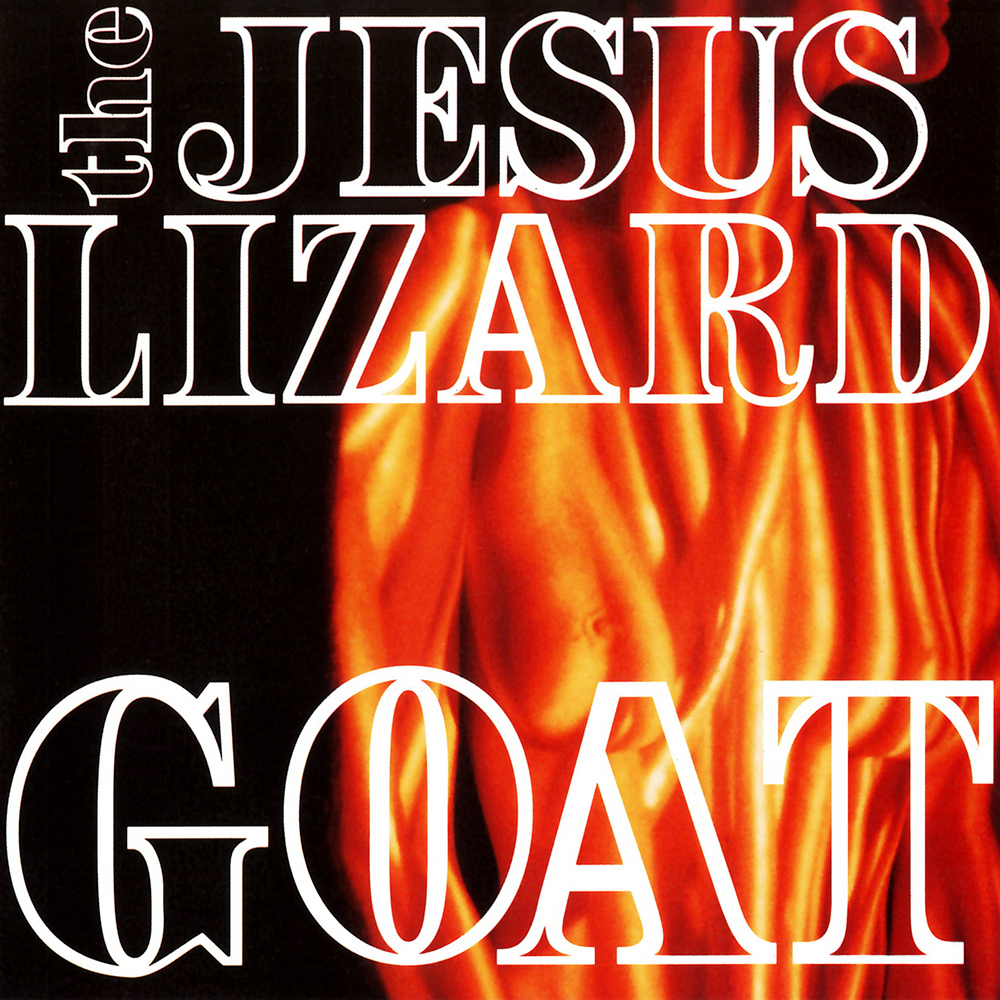 David Yow doesn’t quite remember writing the songs for The Jesus Lizard‘s second full-length album Goat. He can hardly be blamed for that—you try remembering what you did 30 years ago. Then compound it with the kind of chaos that the Chicago noise-rock outfit managed to stir up onstage at the high point of their career. “There was a lot of beer being drank at soundcheck, at practice, at shows,” he says, and for that matter, Yow became infamous for dropping trou on a number of occasions. Jesus Lizard shows had a tendency to get wild.

Chaotic or not, the band’s early period in the late ’80s and early ’90s was marked by a period of intense and concentrated activity. They played a lot and they recorded a lot—four records in four years in the early goings, all of them containing varying degrees of brutally heavy post-hardcore and noisy mutations of punk that fell under the unsubtle and, at the time, derisive nickname “pigfuck,” initially coined by Robert Christgau to malign earlier noise rock purveyors. But The Jesus Lizard—formed after Scratch Acid’s David Yow and David Sims left Austin for Chicago and around the time Sims joined Rapeman—made some gloriously effective noise. And Goat, their second LP, is often regarded as the greatest of their brief but potent canon, and with good reason. It’s an absolute gut-punch of a record.

It could have just as easily been two, however. With the rate that the band was playing and making new music, there wasn’t much planning or conceptualizing of what their albums would become. When they had the songs, they simply recorded them.

“We practiced all the time, and we toured all the time, and we recorded with any time that was left open,” he says. “Once we had enough songs to be reasonable long enough for an LP, we’d just record it. There was never a theme or anything like that for the whole record. I think Goat and Liar could have even been a double album.”

The Jesus Lizard’s Goat is everything the band did great on their first couple releases, but reduced to a more potent solution. Every note stings just a little bit deeper, and every beat just leaves a more brilliant bruise. It’s rowdy, raucous music that was aggressive but hedonistic in its own twisted way, as much a celebration as a confrontation. From the opening thwacks of “Then Comes Dudley,” the album feels like the awakening of a ferocious beast, Mac McNeilly’s heavy, plodding rhythm and Duane Denison’s eerie riffs a disorienting entry point to the band’s strange world. But by “Nub,” a couple tracks in, that ferocious beast has knocked a few back, lost his shirt and engages in some sweaty bear hugs. This music is a lot of fun, however fucked up it might be.

Some of the assistance in that mixture of fun and fuckery can be attributed to Steve Albini, who recorded the band’s entire run from 1989’s Pure on up through 1994’s Down. His signature is all over the album—McNeilly’s snare feels like a slap in the face, which is a good indication that Albini had some hand in its creation. That and the fact that it’s essentially free of overdubs—just four dudes creating a powerful, synchronized din. It’s a considerably different effect than those of the band’s two Capitol Records-released albums, Shot and Blue, which didn’t sell great and which the label didn’t seem to know how to market, Yow says. Still, while Yow vastly preferred Albini’s methods (which he says not everyone in the band agrees on) and came to be good friends with him, he has a certain affinity for the tricks that later collaborators would employ.

“Steve and I became best friends,” he says. “I think he’d still tell you I’m the best friend he ever had. We spent a lot of time together, and shoot pool or billiards a lot. And I had such respect for his recording sensibility. It was pretty much always fun for me. Steve and I like to experiment with unusual micing techniques, and an unusual approach to recording in general.

“We didn’t do much fancy footwork in the studio, especially with Steve,” he continues. “We recorded with Garth Richardson for the Shot album and Andy Gill for the Blue album. There was a lot more trickery and overdubs and stuff. Shot was pretty straightforward. But Blue, Andy had a bunch of cool textural ideas. I think it’s a great headphone record. There’s a lot of cool things going on that you might not catch otherwise. He had this cappucino, coffeemaker, and it shows up in there making noises.”

Yow, himself, is a ferocious presence on Goat, his vocals frequently indecipherable but always intense. He moans and mutters, he screams and barks. He even croons a little. And in some cases, not knowing the words that come out of his mouth could be to some listeners’ benefit. “Lady Shoes,” for instance, reads like a variation on the old “The Aristocrats” joke (“daddy comes in/And jacks off on the piano“).

The most instantly quotable line arrives in “Mouth Breather,” a ripper of a track that reaches the climactic chorus of, “He’s a nice guy, I like him just fine…but he’s a mouth breather.” The line is apparently quoted verbatim from Albini about Slint’s Britt Walford, who house-sat for Albini and apparently broke his toilet and flooded his basement.

“The sources I draw from for lyrics would be a whole wide variety of stuff,” he says. “Often it’d be from unusual dreams I had or current events, or something somebody told me about. I think ‘Mouth Breather’ is probably the most specific example of that kind of thing. Britt was staying at Steve’s house. I think that Steve actually said ‘Don’t get me wrong, he’s a nice guy, I like him just fine. But he’s a mouth breather’. So it’s not really written by Steve, but it was said by Steve.”

Goat’s become something of a legendary record. It’s not necessarily shrouded in myth like, say, Slint’s Spiderland. And because it was released amid a flurry of activity that saw The Jesus Lizard become one of the most productive and notorious post-hardcore bands of the ’90s, it’s perhaps viewed as part of a larger canon rather than a standalone moment of genius. But it also has some of the best-known, and simply best, songs The Jesus Lizard ever wrote, be it “Mouth Breather” or the soaring, climactic “Monkey Trick.” When asked what sets the album apart as being the band’s most celebrated work, Yow leans toward the simplest answer: It’s the songs.

“Maybe the songs are more immediately accessible, or easier to get a hold on than the stuff on Head, and it sounds better than Down.”

As we wrap up our conversation, Yow is waiting at an airport where a plane will transport him to the first stop on the second Jesus Lizard tour in two years, a relatively rare occasion these days. (I can only imagine the looks on people’s faces when he’s reciting the lyrics to “Lady Shoes”.) That’s partially because the band originally ended so long ago, and the music they’re playing is decades in the past, including that of the 27-year-old Goat. Yet Yow says the band’s better than they’ve ever sounded, even if they haven’t written any new music. And though the reunion gig isn’t something he was enthused about at first, over time he warmed up to the idea if only because of the audience.

“Maybe we’re not any better to watch because we’re old and tired, but I think we’re better now as a band,” he says. “The timing’s better. I took some voice lessons so I’m better at getting near the pitch the song’s in. It’s a lot of fun, thoroughly exhausting, but fun and rewarding. At first, I felt kind of whorish about it. But I was told we were making a lot of people happy. So I like that a lot.”