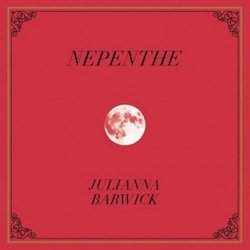 The ideal live setting for hearing Julianna Barwick’s music is in a church. It’s not often you get to say that about a contemporary musician without an overt religious connection, but for Barwick this has already been put into practice. At SXSW in 2011, Pitchfork held a showcase at Austin’s Central Presbyterian Church, which is an unusual enough venue to participate in a booze-fueled four-day rock ‘n’ roll orgy, let alone a place to watch Cults or Twin Shadow. Yet as the opener for the showcase, Barwick set the tone with a solitary, transcendent performance, her one-woman choir approach filling the hallowed halls with a sonic glory that felt spiritual itself.

In a sense, Barwick’s music has always sounded like sacred music, despite having no connection to any religious movement. Her layered vocals have always taken on a choral quality, every voice her own, melding into a solitary unit of achingly gorgeous ethereality. With each new recording, though, Barwick has sought greater clarity within that indefinable beauty, sharpening the edges between the layers and bringing the shapes into greater focus. She added more instrumentation on 2011’s The Magic Place, and on her new album Nepenthe, she’s simultaneously taken the effort to focus in even closer on those intricate details, while expanding the limits of where her approach can take her.

Recorded in Iceland with members of Amiina and Múm, and a teenage girl choir, Nepenthe sounds very much like a greeting to the rising sun at the top of the world. Barwick recently took on an opening spot on a tour with another Icelandic group, Sigur Rós, and that group is actually a pretty apt point of comparison on Nepenthe. On “Pyrrhic,” in particular, a frosty strata of voices provide a breathtaking backing for some faint, distorted coos, which at a glance resemble those of Jónsi Birgisson. But while there are some passing stylistic similarities, the greater comparison between Barwick and the Icelandic post-rock group is in how each uses space as a means to convey something vast and expansive. Never before has Julianna Barwick’s music sounded so massive, even if its means have been so humble. And that hasn’t changed all that much here, only now the production gives her an even bigger stage on which to perform.

As was the case on Barwick’s previous two albums, Nepenthe moves slowly and carefully, unfolding new layers gradually and gently, and never with too much drama or pomp. Because of the way the album progresses, when the methodology changes, the results are highly noticeable, and usually for the better. “Crystal Lake,” for instance, incorporates some light electronics and a woozy, vintage-sounding piano treatment. “One Half,” in what might be a first for Barwick, actually features some repetitions of actual English words in what might be the closest to a pop song she’s ever written. And though “Adventurer in the Family” falls more on the abstract, atmospheric side, its use of gently plucked strings give it an earthiness that eludes the airier tracks on the album. That airiness, however, is an asset, not a liability.

What Barwick accomplishes with mostly just vocals is both profoundly beautiful and not particularly easy to do. It helps that she’s a gifted singer, though even more impressive is how she uses that instrument to build something bigger than merely one person. And Nepenthe seems not just bigger than one person, but bigger than everyone. It’s evocative of something mysterious and universal, something wonderful and strange — and yet, simply doing something that seems bigger than pop music is miracle enough.