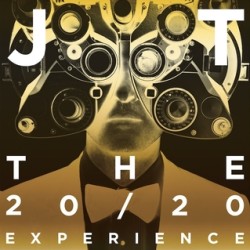 In the year of his omnipresence, figuring out the specifics of Justin Timberlake’s grand ambition can be an elusive pastime. He’s one of our great celebrities, and though there’s a reason I say “celebrities” and not “artists,” he’s genuinely good at a lot of things, including TV comedy and movie drama. He has antecedents in that regard, two that spring to mind for different reasons. One’s Will Smith, whose rap records aren’t as distinguished as Timberlake’s pop records, but were successful enough to fund his better career as an actor.

But who Timberlake seems to want to be, and who I think he can emulate, is Frank Sinatra. While Sinatra was credibly acting in serious movies and comically hamming it up in the Rat Pack, the music he concurrently made was marked by albums of incredible artistic risk. In the midst of winning an Oscar and quipping with Dean and Sammy, Sinatra was inventing the art of the pop album. Whether he was making a set piece like Songs for Swingin’ Lovers, shattering emotional terrain like Only the Lonely, or grappling with age in September of My Years, the drive of his music was not just fed by his ambition to conquer all media — it was to push the art forward.

The 20/20 Experience, both parts, comes festooned with motivation and spectacle. It stands as Timberlake’s attempt to provide as consumptive an event as humanly possible. Few albums this year sound better on a technical level; both are triumphs of Timberlake’s showmanship and producer Timbaland’s deeply thought, cleverly indiscriminate sound sculptures.

Part 1 set up those coups almost by boilerplate. Each of the songs, only one of which clocked in at less than six minutes, was generally (not always) cut in half. The first part was the core song, and the second was a coda where Timbaland rephrased, recut and recast the song to add another level. Sounds sort of workmanlike, and it wasn’t perfect, but more often it worked. One track, “Blue Ocean Floor,” is one of 2013’s greatest 20 or so songs.

Part 2 is, on points, also a good album. But while this isn’t necessarily music you’re supposed to think about, the more I did, the slightest cracks in the JT mystique began to show. Timbaland excels again behind the boards, and Timberlake sings his heart out. There is, however, a routine gait to some of the more meandering songs. When Timberlake does break out of it the results are interesting, if incomplete and not as surely footed.

Two cases in point. The album’s most buoyant song is “Take Back The Night,” the kind of appropriation Timberlake does with sincere admiration and affection, like “Suit & Tie”: a tribute to the late ’70s smooth disco of Earth, Wind & Fire and Michael Jackson, with a passing nod to George Benson’s “Give Me the Night.” (I see what he did there. I think.) It’s the album’s least confused song. Timberlake’s voice runs over the conveyor belt with assurance and warmth, and it’s more than just a case of excelling at the familiar, it’s got a huge heart.

Contrast that with “Drink You Away.” Excepting “Blue Ocean Floor,” it’s the biggest departure Timberlake makes on either of the Experiences. It’s a contemporary country song cut with a crazily wandering Hammond organ line that you might hear in a traditional gospel revival. It’s Prince having a go at a Little Big Town tune. The song’s a pleasure, and feels like the album’s first true moment of Timberlake breaking out… but then, well, I went and thought about it. “Drink You Away” doesn’t sound like a natural extension of Timberlake, because he’s too much in control to actually go on a drinking binge. It feels as if JT had the idea to write a country homage through his eyes, got the music right, and chose the most stereotypical route for the lyric.

The opposing points of those songs make for a disconnected Part 2, although it helps that the bangers are sequenced first and the genre experiments come after. “Gimme What I Don’t Know (I Want)” and “True Blood” open the album with almost 15 minutes of tight, arching dance pop, with Timbaland throwing in enough keyboard quips and arch touches to keep headphones amused. The nine and a half minutes of “True Blood” are far too many, though, forcing Timberlake to rely on vocal jungle and vampire caricatures just to fill out three minutes.

Timberlake fully avails himself to metaphors pretty much at will. That doesn’t derail anything, but on pieces like the cheating drama “TKO” it calls attention to itself. Same with “Cabaret,” but that particular song’s great. Timberlake wraps unusually rapid vocals around a wicked stuttering groove, comparing sex to a home version of a Vegas revue. It’s easy but witty and effective, and it gives him the chance to sing the best line on the album: “I got you saying ‘Jesus!’ so much it’s like we’re laying in a manger.” (Drake almost tops that with his cameo rap: “Pole in my bedroom? That was there when I moved in! Okay… fine, I’m a terrible liar.”)

The second half in which Timberlake stretches his style is both encouraging and just a bit too fabricated. The only conceit of “Murder” is a sudden time shift at the end of each quatrain that throws the whole rhythm off, and one of Jay-Z’s tamer cameos does little but accelerate the simile of the lyrics. “Only When I Walk Away” lumbers in forced insanity, and while it’s not bad and appreciably psychotic, it doesn’t get truly manic until the Timbaland coda, and a strangely congruous reggae beat. “Not A Bad Thing” again draws from the modified country of Keith Urban, genteel, sweet and inoffensive. When Timberlake sings, “It’s not a bad thing to fall in love with me,” you wonder if he’s making a personal statement to his detractors. “Amnesia” ultimately falls short of its noir-ish promise, but the orchestration’s gorgeous.

Overall we’re left with a fairly classic case of a highly skilled practitioner, an architect with great procedural instincts and skills who vanishes from our lives once he leaves the office each night. Perhaps it’s unreasonable to expect any kind of sagacity from a 32-year-old artiste with the party still in his rear-view, but thematic and narrative extension don’t seem that far outside his grasp, especially since he’s not likely to age as a musician the same way, uh, R. Kelly did. (Maybe that’s because I still believe “SexyBack” was really about a bored, unfulfilled gigolo.) With The 20/20 Experience(s) Justin Timberlake has cemented himself as today’s most-rounded entertainer, and mastered pop music’s expanse. It would be great if next time he started plumbing its depths.