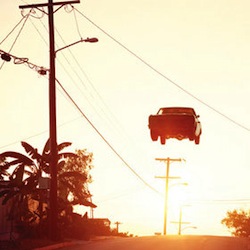 When Kinski released their last album, Down Below It’s Chaos, in 2007, the title may have very well been in reference to the sheer power the band had harnessed via psychedelic, metal-flirting heaviness. Yet it turned out to be a very different sort of chaos that would come to haunt the band in the years to come. Personal problems and dissatisfaction with their own material would put professional progress on hold for nearly half a decade. As frontman Chris Martin told Big Takeover, “I wanted to go in a different direction with the music, but I wasn’t sure what it was going to be… so we just kept writing,” and that writing went on for six years — certainly not the longest break between records an artist has ever endured (hello, Godspeed You! Black Emperor), but definitely long enough to cast some doubt on a band’s future.

With the arrival of Cosy Moments, the band’s sixth album and first on Kill Rock Stars, any doubt about the vitality of Kinski as a band is easily wiped clean. The group is alive and well, fuzzed out and cranked up, and ready to kick ass again. Kinski seem to imply as much with the album’s awesome cover art, depicting a car flying over a hill, Bullitt style, and the album itself is a pretty straightforward declaration of rock ‘n’ roll reclamation. Less metallic than the band had been on Down Below, Cosy Moments is a slightly more straightforward path for the Seattle-based group, balancing roaring, concise Stooges-style proto-punk with exotic psychedelia and fist-pumping riff rock. Kinski, after a lengthy break, sound recharged.

Kinski never stray too far from a fairly simple guitar-based power-chord attack, but manage to cover a lot of ground on Cosy Moments. That probably sounds contradictory, but Kinski have been doing this long enough to know how to diversify their approach without adding too much bloat. The album gets off to a mellow, psychedelic vibe with “Long Term Exit Strategy,” vibing out on a droning grunge raga for seven minutes before kicking down the door with the two-chord punk of “Last Day on Earth” and “Skim Milf.” Yet it’s around track four, the hilariously titled “Riff DAD,” where the album really begins to take an interesting turn. It’s an instrumental psych freakout, essentially, albeit one that maintains a melodic core, but it’s something that the band does remarkably well. Even better is the hypnotic Jesus and Mary Chain-style chug of “Throw It Up,” easily the catchiest tune of the bunch. However, “Conflict Free Diamonds” gives it some good competition, its jerky rhythms showing off the band’s knack for alt-rock hooks — a knack, it should be noted, that often goes unnoticed.

It might come as a bit of a disappointment for long-time Kinski fans to hear them largely shifting away from their lengthier psych-outs in favor of more accessible rock anthems, and that would be a perfectly understandable reaction. But then again, Cosy Moments is so stacked with solid rock tunes that it’s hard to find fault with that. For all the astral traveling they’ve done in the past, it’s good to hear Kinski just get back to making some noise.

Kinski : Down Below It’s Chaos