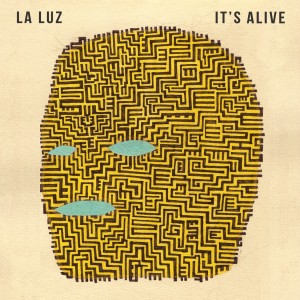 For a genre that’s been around since the 1950s, it’s fairly remarkable that surf rock never stopped being cool. It’s gone out of fashion certainly, and after The Ventures and Dick Dale, reached the limit of its commercial appeal. But even well after its heyday, surf guitar has cast a long, cool shadow that has lingered long after it rode its first wave onto the charts. It’s cropped up in the reverb-heavy riffs of The Pixies and the tremolo of My Bloody Valentine (listen closer, it’s there), and most famously, on the soundtrack of Pulp Fiction, thanks to a reminder from Quentin Tarantino just how badass Dick Dale’s take on “Misirlou” is.

Seattle’s La Luz have clearly done their homework on Dale, The Ventures, Santo & Johnny and The Shadows. They don’t play a mutant hybrid of surf rock and punk, shoegaze, metal, hardcore or dance music. It’s surf rock, made just that much better through the addition of gorgeous, all-female vocal harmonies, and not much else. To call their Hardly Art debut It’s Alive “traditional” might not tell the whole story, but it’s also still mostly accurate. For in spite of some minor cosmetic and structural adjustments, It’s Alive is about as close to traditional surf rock as indie rock gets without an interplanetary backstory or luchador masks. And, unsurprisingly, it’s damn cool.

With the opening rush of guitar jangle and organ on “Sure As Spring,” the listener’s mind is likely to go to a ubiquitous melody like “Hawaii Five-O,” only with the horn section replaced with a foursome of stunning vocalists. It’s good fun, as surf rock typically is, but it’s also crafted impeccably, essentially a meticulously written pop song within a surf-rock framework. That mostly turns out to be La Luz’s M.O. all along, on a hip-swinger like “All The Time,” on a moody toe-tapper like “Morning High,” or a fright-night instrumental creep like “Sunstroke.”

La Luz aren’t above kitsch — The Munsters theme may well have been as influential on the band as “Sleepwalk” was. And the album is titled It’s Alive; let’s not forget that. But while the group certainly sound as if they’re having fun leaning on their whammy bars and squeezing out eerie Farfisa chords, their approach to both atmosphere and songwriting is impeccable. That’s not always a guaranteed formula to make a grandparent-aged genre stay cool, but it certainly doesn’t hurt.