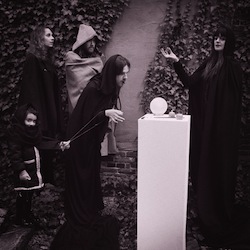 When a garage rock album starts off with saxophone instead of guitar, it’s a promising sign. Most of the time, you can set your watch to garage rock records — there’s a fuzzy power chord stab, a bash of snare, and a Sonics-style howl, and the pattern more or less continues for about 30 minutes. Not that it’s a bad thing, necessarily; though Ty Segalls and King Khans only come along every few years, the meaty din of garage rock is practically a universal language. But on “Evil Eye,” the first track on Lantern’s new album Rock ‘n’ Roll Rorschach, above the tom-tom rumble and two-note bass riff, it’s not two guitars you hear competing for the listener’s attention — it’s guitar and sax, the latter of which clearly wins, simply for being less obvious or less expected.

Let’s be clear — Rock ‘n’ Roll Rorschach is definitely a guitar album. The Philadelphia band has a suitcase full of riffs, effects pedals, solos and distortion to go around, in uptempo blues-punk raveups (“Where Are We Now?”), glam-rock hip-shakers (“King of the Jungle”) and sleazy burlesque stomps (“Rock ‘n’ Roll Rorschach”). But even with familiar elements, the band finds interesting ways to express them, more often opting for a dirty, sexy swagger a la Royal Trux or The Kills than by merely chugging away at punk-by-numbers pit-starters. But when slowed down and blissed out, Lanterns prove their chops to an even more impressive degree. Emily Robb’s reading of “She’s A Rebel”’s title against her atmospheric guitar licks and Christian Simmons’ light tom-tom patter pairs as both opium den hallucination and raunchy striptease soundtrack. And when they ramp up the grit on “The Conjurer,” the results are comparatively sexy, but with greasier hair and dirty hands — a rendezvous in an alleyway rather than in silk sheets.

In its more overtly Stooge-y tracks, like “Out of Our Heads,” Lantern aren’t necessarily doing anything novel or unusual, but they sound convincing and raw enough to turn their fun-house ride into something more than mere homage. And with “Heart In Your Tongue,” the album finishes similar to how it began — with a hefty portion of saxophone. Not that Lantern couldn’t have pulled off a damn fine garage rock record with just guitar, bass and drums, which they more or less do despite a little bit of horn honking where it counts most. It all comes down to skills, songwriting and attitude. Rock ‘n’ Roll Rorschach isn’t this good because Lantern doesn’t give a fuck — it’s this good because they do.

Dead Moon – Echoes of the Past