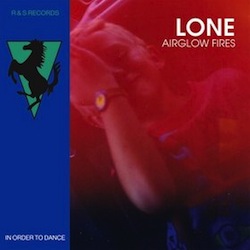 Under his Lone moniker, UK producer Matt Cutler has conquered various different niche styles along dance music’s continuum. His earliest recordings skewed IDM and ambient techno, but on his beat-laden journey, he’s detoured through downtempo, dug through hip-hop’s crates, blissed out on chillwave and acid house, and on last year’s Galaxy Garden — his strongest album to date — mixed it all together in a sticky, funky, and altogether vibrant electronic bouillabaisse.

Galaxy Garden doesn’t mark the peak of Cutler’s creative evolution, however, as much as a brilliant signpost on a path that keeps beating forward. The next landmark on Cutler’s cosmic trip is Airglow Fires, a two song 12-inch EP that satisfies a more direct, immediately satisfying craving, without sacrificing the sophistication or creativity that he’s cultivated over the past half-decade.  The title track, while less sonically busy than the tracks on Lone’s most recent full-length, has an elegant density about it, boasting a jazzy arrangement full of twinkling keyboards and thick flashes of synth. The beats shuffle and clack, samples of voices saying “What?!” and “ungh” undercut an angelic choral backing, and it all more or less culminates in an ethereal ascension that approximates a banging dance party up above the clouds.

The flipside, “Begin to Begin,” veers closer to the hypnotic, shedding some of its counterpart’s big, vibrant arrangement for subtler loops of atmospheric synth and brief eruptions of hand percussion. It’s a much more conventional house track — which isn’t to say that it’s all that conventional in the scheme of things, but certainly more invested in a classic house progression than its A-side. Yet both tracks put a brilliant spin on dance music, taking familiar sounds and putting them in a new context. For Cutler, dance music is merely a leaping-off point to explore any number of different ideas or musical avenues. He never stops moving, and “Airglow Fires” is guiding the way forward.