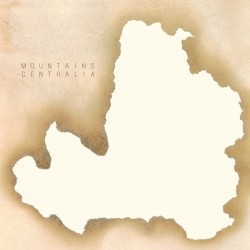 Up until now, there hasn’t been anything particularly mountainous about electro-acoustic duo Mountains. Brendon Anderegg and Koen Holtkamp have a history of understated instrumental majesty, weaving together a powerful if delicate sort of progressive ambience on albums like Choral and Air Museum. But there’s always been a sense that this majesty could be made even more majestic, to soar even more mightily and reach greater heights if Mountains were to pursue them. Not that ambient music always needs to do so — that it’s ambient suggests otherwise, a kind of subliminal and ephemeral style rather than one that commands or imposes. Yet with Mountains, whose compositions, even while subtle, seem to reach and stretch to distant lengths, the potential remains to be that commanding, ambient contradiction.

The album on which Mountains fully redeem the promise of their immense potential, Centralia, still follows through in the same vein of its two Thrill Jockey predecessors. It’s a largely atmospheric work, and one that elegantly fuses electronic pulses with acoustic guitar or occasional string. But here, it seems bigger, livelier, more immersive. Mountains’ prior albums invited the listener to drift away; Centralia consumes them. Ironic, then, that the album is named after a town with a population of 10, abandoned after a tragic mining fire in the 1960s.

Whether Centralia is intended to reflect the actual Pennsylvania town is unclear, though there’s a parallel to be drawn between the vast natural world outside of the ghost town and the hugeness that Anderegg and Holtkamp craft on the album. The centerpiece of the record is a 20-minute planet of a piece, recorded live, that slowly moves from warm and soft tones to gradually denser and noisier throbs and flutters. It grows massive, but not explosively so. This is the slow pace of letting things take their natural course, and the end result is powerful, even intimidating. Yet some of the best moments on Centralia are song driven. “Tilt” is built primarily on gentle guitar arpeggios, escalating in tempo and growing in intensity as the heady hum of electronics drones underneath until it becomes one of the most intense pieces in the group’s catalog. And closer “Living Lens,” though one of the shorter tracks at just under five minutes, trades in strums and throbs for a softly twinkling dream-trip to oblivion.

Then again, Mountains have never seemed mountainous because, more than anything, they’ve always seemed cosmic. Ethereal. Vast, but spacious. Here, however, there’s a lot more occupying their skies. This is a planetary work rather than an atmospheric one, an album that succeeds by not holding back, not merely opening up possibilities but seeing them through to an incredible resolution.