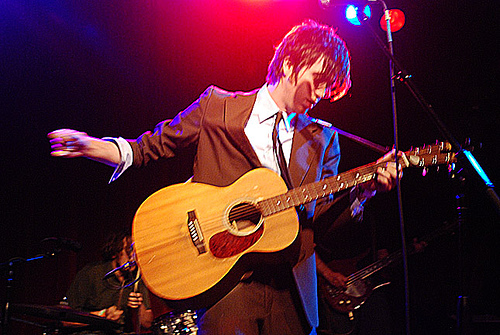 For an evening in mid-June, the air bit at the hair on our exposed skin with a surprising chill; such is the stubbornness of late spring in the Pacific Northwest. I pulled up the collar of my thin jacket and headed for Neumo’s with my friend Christian. The sun sank slowly over the Olympic Mountains to the West, through a muzzy film of orange and pink cloud cover. It was the perfect interlude to the Gothic alt-country styling of Austin’s favorite sons, Okkervil River.

Over the din of the bar, representatives for the Seattle based charity, Noise For The Needy, thanked the audience for attending, informing us that proceeds would benefit children and teens affected by HIV/AIDS.

Then, on with the show.

Whistling and the acoustic strums of the first act, Ghost Stories, could be heard, but only if you struggled to pay attention. A single man with his guitar couldn’t quite captivate an audience eager for a certain band of Austinites. The second opener fared better.

Seattle’s Sera Cahoone, a country diva in training, wowed the crowd enough to garner their full attention. It may have helped being a former member of cult-favorite Carissa’s Weird, or that she played drums on Band of Horses’ debut, Everything All The Time, but perhaps it’s more likely the fact that she is a really, really great musician. Like Neko Case’s kid-sister, Sera and her accompanying band (which featured a violin, pedal steel, banjo, electric guitar, acoustic guitar, drums and bass) promptly delivered her fans to the darker realms of countrified bliss.

At one point a few songs into the set, Christian tapped me on the shoulder and yelled over the sliding steel guitar, eyes wide and serious, “She’s really good.”

I could only nod, so entranced by Ms. Cahoone in her black Patti Smith t-shirt and leather boots was I, as she serenaded us unwitting concert-goers. I guess we weren’t the only ones to think so; the heads at independent record giant Sub Pop were wise enough to sign her. And if the new material she played is any indication, we should expect great things from her in the near future.

By the time her set ended, I had nearly forgotten the real reason I’d come, to witness firsthand the lyrical and musical genius of a certain balladeer by the name of Will Sheff. Bespectacled and in an unassuming brown three piece suit (complete with skinny brown tie), Sheff sauntered on stage prior to the performance to set up his pedals. Buried beneath that nonchalance lurks the frantic mind of a novelist with a penchant for fable-like journeys as dramatic and riveting as they are emotionally resonant. The club breathed deeply the rich haze of anticipation.

Okkervil River wasted no time in flexing their chops, tearing into the scathing “speculative fiction” (as Sheff called it) of “The President’s Dead.” The fire in his eyes and the venom sprayed on those up front indicative of a passion that would only grow more powerful as the night continued. Neumo’s shook with excitement as the band sampled “Our Life Is Not A Movie Or Maybe” from their forthcoming release, The Stage Names. Sheff’s voice lifted with urgency as he wheeled around stage; the band rocked as they never quite have on previous outings. Guitarist Brian Cassidy replaced a broken string mid-way through, just in time to launch an inspired riff at the song’s end. “All The Latest Toughs” followed, complete with an extended keyboard intro. The audience even broke Seattle’s unspoken “no dancing” rule and actually moved to the music (I think two rabid fans from Portland had something to do with it).

“This next one is new,” Sheff said between breaths, “and it’s a slow one.” The unnamed song built to a towering crescendo of cathartic desperation as only Okkervil River are capable, Sheff cradling his acoustic guitar while crooning a repeated chorus of “I’m not the lady-killer sort,” his eyebrows devilishly raised. The new number sent a glacial breeze through the entire venue.

The band then trotted through a selection of songs from their three previous albums, including “Song Of Our So-Called Friends,” “Black” and “For Real” from the acclaimed Black Sheep Boy, as well as “The War Criminal Rises and Speaks” from Down The River Of Golden Dreams. During the former tune, an over-zealous fan singing along made a smiling Will Sheff forget his own lyrics and stop the song. He seemed nonplussed by the screw-up, grinning the whole time while they started up again. “Okkervil River Song,” from the band’s first album, ended the set. Keyboardist Jonathan Meiburg shouldered his accordion while Cassidy plucked away at his mandolin and the audience assisted Sheff and the rest in the final denouement, the repeated line of “And I searched and stared but only the river stared back.”

It all seemed to end too soon, amid the cacophonous applause and fans screaming for “Westfall.” The audience would not be disappointed with the encore. Sheff appeared on stage first, solitary, to strum out a slow new song on his acoustic guitar. Another rousing new one with the full band backing, “You Can’t Hold The Hand Of A Rock And Roll Man,” re-energized the crowd next (and just plain rocked).

“This is by request,” Sheff said as the band prepared to play their final rendition of the evening. After only a few guitar strums and mandolin flourishes, the audience erupted in wild cheers. The blood-curdling murder ballad “Westfall,” renowned as legendary when heard live, closed-out the show. And with an adlibbed chorus from the Rolling Stones’ “Paint It Black” thrown in for good measure, did it ever send us on our way, adrenaline pumping into the cool June air and dark Gothic tales creeping through our brains.