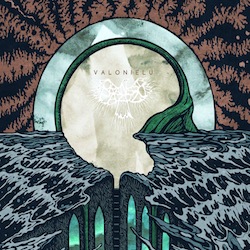 Last year, a Reddit-user-created map of the earth, color-coded by the amount of metal bands per capita, went viral. The heat map confirmed some familiar suspicions, namely that sub-Saharan Africa and the Middle East don’t produce that many metal bands, and, conversely, Scandinavia is the most reliable factory for producing heavy music. In particular, Finland apparently has a higher concentration of metal bands than anywhere else in the country, at 53 per 100,000 people, almost twice that of nearby Norway. Of course, most of those bands are completely obscure as Western audiences are concerned, though Finland does have a history of innovations in heavy music, be it the melodic death metal of Amorphis, the epic folk metal of Moonsorrow, or Reverend Bizarre’s modern update of traditional doom.

Oranssi Pazuzu probably isn’t a name too familiar to audiences outside of Europe just yet, but the Finnish group is playing metal that’s too good to stay a homegrown secret for long. It certainly helps that the group’s third album, Valonielu, is being distributed through 20 Buck Spin, their first American label home. More importantly, the way in which the band combines the textures of black metal and the head-spinning weirdness of psychedelia and space rock is more than just novel — it’s absolutely thrilling. It’s a safe bet that even if you’re a regular listener of heavy music, you probably haven’t come across anything this year quite like Valonielu.

Black metal hybrids are pretty common in 2013, to the point that it’s almost quaint to hear a traditional lo-fi blast beat set anymore. But it also takes a little something extra to make a metal fusion effort stand out — after Sunbather, it’s going to be hard to climb any higher with blackened post-rock and shoegaze, for instance. But Oranssi Pazuzu — whose name is a combination of the Finnish word for “orange” and the demon from The Exorcist — pull from krautrock, heavy psych and space-rock to arrive upon a curious and foreign, yet ultimately incredible sound. It hits pretty early on Valonielu; leadoff track “Vino Verso” locks into a krautrock-influenced groove that becomes almost hypnotic as analog synths set their laser beam frequencies ever higher, creating intensity and fear where guitars stick to groove and repetition. “Tyhjä tempelli,” meanwhile, is metal only in Jun-His’ menacing growl; the song itself is a tense, swirling psychedelic dirge that’s at once gorgeous and highly ominous.

There are two 10-plus-minute tracks on Valonielu, and as you might expect with a band whose tendencies veer toward the cosmic, that’s where most of the album’s greatest moments occur. “Uraanisula” has a slow, stark build that ultimately leads to a harrowing industrial-metal gauntlet. It’s dark and foreboding, but by god it’s breathtaking. Meanwhile, the colossal 15-minute closer, “Ympyrä on viiva tomussa,” approximates a sleeping dragon, effects-laden smoke slowly fluttering out of its lair — until a little after the five-minute mark, at which it is brought out of its slumber, and it’s a force to be reckoned with. For how much power Oranssi Pazuzu wield, however, it’s still the atmosphere that leaves the greatest impact — the strange textures and sense of disorientation that occupies much of their music. It’s safe to say there aren’t too many other metal bands like this in Finland. As far as I can tell, there aren’t too many metal bands like this on the planet.