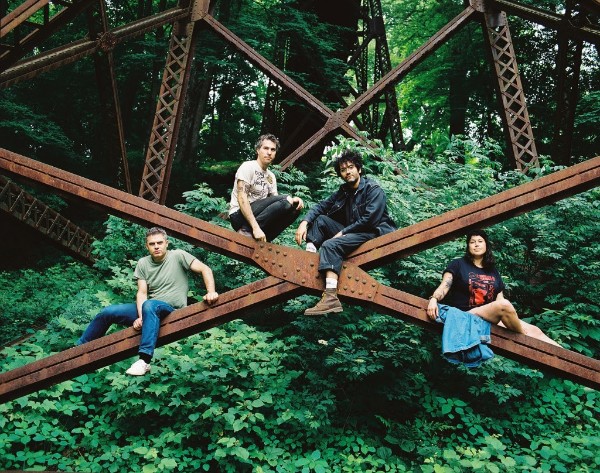 Pill‘s 2016 album Convenience often transitioned between brief bursts of incendiary punk energy and saxophone-fueled dance-punk freak-outs, both of which were as fun as they were thought-provoking and introspective. But what makes their music far more interesting than typical, boilerplate dance punk acts is the level of nuance built into their songwriting. Their new single “Fruit”—which debuted with a colorfully psychedelic video full of paint, fireworks and various goo—is as attractively dark, cool and subtle as the Brooklyn band gets. Its groove is sexy and sinister, its mirrored guitar and sax riffs hypnotic. But this song, too, is an explosive one in parts—vocalist Veronica Torres breaks the Black Lodge entrance ritual with a cry of “Fall down!” But it’s not until the second verse, during which an ethereal, otherworldly piano skates across the surface that “Fruit” goes from a solid groove to transcendent art punk. Pill have never been a conventional sort of post-punk band, and they’re clearly not interested in slowing their progression.

From Soft Hell, out October 26 via Mexican Summer