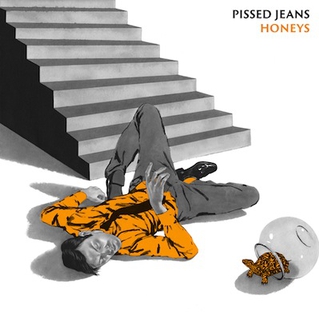 Late last year, Pennsylvania noise-punks Pissed Jeans introduced their third Sub Pop album, the upcoming Honeys, via a thrasher titled “Bathroom Laughter,” as grotesquely awesome a pigfuck banger as listeners have come to expect from the band. And with the next drip from the album, “Cathouse,” Pissed Jeans take a more streamlined leap into throat-ripping three-chord punk.

“Cathouse” is part of an ongoing series of PJ tracks in which frontman Matt Korvette expresses his own sense of disillusionment and detachment via the most violent and seething means possible. And yet, somehow, this time it comes out feeling that much more fun. He shouts “I got an invitation!”, narrating a disappointing visit to a brothel that’s not so much sexy as extremely bitter and snarling. “I thought maybe everything would change,” he hopelessly laments, “But every cathouse is the same.” Maybe so, but this, like the best of Pissed Jeans’ songs, is a delightfully destructive romp.