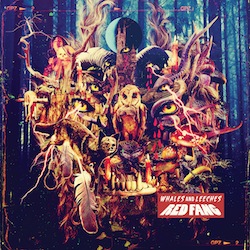 Viewed through the lens of branding, Red Fang have positioned themselves as artists with a gift for the lowbrow. Whether it’s their depictions of LARPing in Bud Light armor or creative car-crash stunts, or their newly launched beer chugging video game, the Portland stoner rock group send a pretty clear message that their heavy, low-end riffs are best associated with reckless weekend destruction and copious amounts of American pilsner. It’s not that hard to see the appeal, either — with enhanced blood alcohol content and Red Fang cranked on the stereo, who wouldn’t want to strap on a helmet and go flying through a pyramid of toilet paper?

While there’s no doubt more than a hint of sincerity behind the band’s image as beer-fueled party animals — they seem like fun dudes — it puts up a smokescreen in front of their musical chops, which only grow sharper with each new release. The band were plenty badass on their self-titled debut, and expanded their palette with even closer attention to hooks and stronger songwriting chops on 2011’s Murder The Mountains. With third album Whales and Leeches, Red Fang continue to refine and sharpen the strengths they’ve already honed, streamlining their punk-edged rockers and building up their stoner epics to even more expansive heights.

Held up against its predecessor, Whales and Leeches seem pretty similar. Both albums span a tight, efficient 42 minutes, their latest comprising 11 tracks where Murder had 10. Likewise, both albums come packed to the gills with hooks and heavy metal riff thunder, which is about the absolute minimum you can expect from Red Fang. Where Whales and Leeches diverts from its predecessor is in its more straightforward riff attack. Most of the tracks here are between two and three minutes apiece, going for efficient, no-nonsense, punk-edged hard rock without as much of the groove that defined Murder The Mountains. The section that begins with “No Hope” and ends with “Behind the Light” is one raw, jagged ripper after another, driven by power chords and a badass sneer — it’s metal that doesn’t give two shits about getting fancy, and though it can be a bit of a bruising blur, it’s the bruising that matters most.

Every now and then, however, that groove comes back, and it sounds as awesome as ever. One such instance occurs with opening track “DOEN,” which gallops along a badass shuffle, its riffs stomping the earth like the Four Horsemen of the Apocalypse. And another comes immediately afterward, with “Blood Like Cream,” a catchy, head-nodding rocker that’s not all that great a distance from mainstream alt-rock — I’d certainly take more of this on the radio than Imagine Dragons, anyhow. By and large, though, Whales and Leeches feels a bit more back to basics — a streamlined, straightforward rock album that’s loud and fast, and wastes little time in doing so.