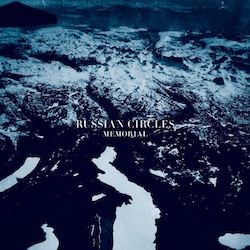 “Memoriam,” the first track on Russian Circles’ fifth album Memorial, is gentle and somber, a familiar-sounding blend of texture and atmosphere in post-rock or post-metal, if one the listener knows fully well won’t stay that way for long. And it doesn’t — only 88 seconds, in fact — but it’s a gorgeously brief juxtaposition of guitar and strings, a softly mournful piece of music that has a significant presence during its brief duration. This is to be expected on some level — the album is called Memorial, and even in its near absence of vocals, there’s a sense that loss and mourning play a role at some level, informing the darkness and minor key textures that the Chicago trio explore across its eight powerful tracks.

“Memoriam,” as expected, fades quickly and only faint glimmers of it ever return through the intense expanse of Memorial. For while Russian Circles is a band whose language is mood and atmosphere, metal is how they choose to translate it. And Memorial — like past albums Empros or Station — is a monumentally heavy album. When “Memoriam” fades, the band quickly conjures up a majestic, fearsome beast in the form of “Deficit,” a jaw-droppingly powerful piece of music whose chemical makeup is part film score and part instrumental sludge anthem. It retains its dark majesty from beginning to end, but the song travels a great distance in six minutes and 42 seconds, opening with an almost sinister sense of mystery, briefly to be interrupted by a storm of blast beats, and then an Isis-style chug of power chords and soaring leads. There’s a lot to absorb and process, and that’s only the first of many such songs to cascade, climax and charge.

Russian Circles have always been as much about beauty as power, though, and Memorial is nothing if not absolutely, gut-wrenchingly beautiful at times. One of the album’s more graceful standouts is “1777,” which takes on more of an ethereal, shoegaze vibe in spite of Dave Turncrantz’s ferocious drum performance. There’s a turn toward ominous, blackened atmosphere on “Burial,” one of the heaviest tracks here, thanks to the traces of evil it carries in its aerodynamic trajectory. But it’s not all so dark, somber or menacing, as evident in “Ethel,” a track that’s triumphant in its finger-tapped melody.

As with all of Russian Circles’ albums, Memorial is almost entirely instrumental, save for the closing title track, which features a contribution from Chelsea Wolfe. Her presence is subtle and atmospheric, but adds a significant and interesting element that sends the album off on a gorgeous high atop a shimmering permutation of the riff that opens the album. Dreamy and weightless, it’s a lush destination after the rush and intensity that the band stirs up on the road that leads here. Some of that road is familiar, some of it is exotic, and some of it is even a bit intimidating, but the path taken on Memorial is invariably captivating.

Pelican – What We All Come to Need

Shadow of the Horns: Five Labels Keeping Metal Interesting in 2019