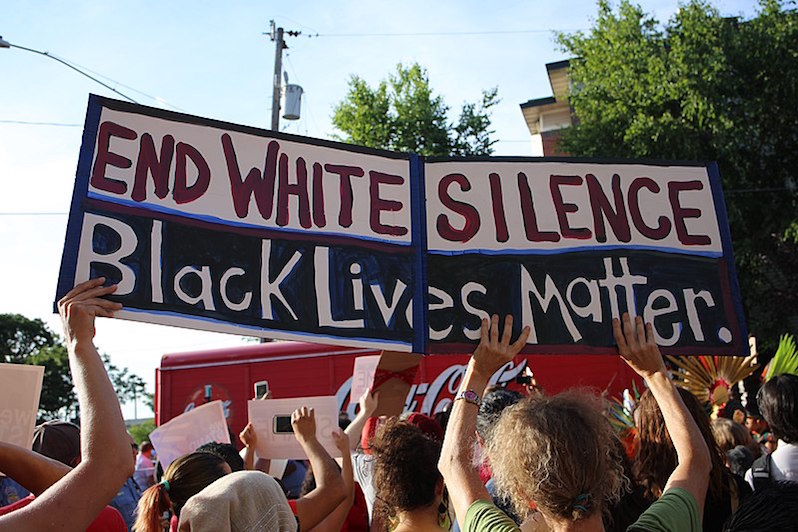 As of a couple weeks ago, I had a whole essay planned about how grunge bands like Soundgarden and Alice in Chains were formative in turning me into a metalhead. But that’s going to have to wait. Fond memories of grunge aren’t important right now, not when America is rising up against police brutality, institutionalized racism and the same ugly violence that’s been part of our history…well, since our ancestors set foot on this rock.

One of the things that drew me to metal as a community is that there are a lot of just honestly good people involved in heavy music, and there are some truly generous and kind people as well. There are also a lot of dipshits who think it’s fine to look the other way when a popular band like Behemoth or Deathspell Omega does or says some racist bullshit, and that’s not OK, and I refuse to let them ruin metal for the rest of us.

So instead of getting nostalgic for some records that mean a lot to me (which I will certainly get to, just not now), I wanted to cede the floor to bands in the metal and hardcore communities that are putting their money where their mouth is. Here’s a list of bands and labels in the metal sphere that have spoken out or donated money to Black Lives Matter, bail funds, mutual aid or other organizations.

– Vile Creature have announced that on Friday, when Bandcamp once again will waive their cut of sales, they’ll have “Gummies, Gummies! Apathy took Helm” vegan sour gummy worms for sale, proceeds of which will be donated to bail funds.

– Couch Slut will donate proceeds from the sale of their new album Take a Chance on Rock ‘n’ Roll on Friday to Black Lives Matter chapters and bail funds.

– Wailin Storms are donating their sales from Bandcamp on Friday to EmancipateNC and the NAACP.

– Harm’s Way are auctioning off test pressings of all their albums at $10 per entry (unlimited entries per person), and 100 percent of proceeds will be split, 50-50 between My Block, My Hood, My City and Chicago Community Bond Fund.

– Code Orange, Turnstile, Vein and Every Time I Die are also auctioning off a joint batch of pressings, also for $10 per entry, with 100 percent of proceeds being donated to 39 bail funds.

– Rotting Out has put up a shirt for sale depicting a Black Panther and a Brown Beret, with proceeds to benefit the LA Bail Fund

– Portrayal of Guilt are auctioning off some rare records and test pressings, noting that all proceeds will be donated (they haven’t specified exactly which organizations they’re donating to, but they have shared resources on their social media).

– Hot Blooded Podcast and Metal Bandcamp Gift Club are raffling off a Bandcamp gift card. Entries are $5 each, and proceeds will be donated to bail funds.

– Fever 333 is hosting a live stream on their website today to benefit both Black Lives Matter and Minnesota Freedom Fund.

– Ghoul are also donating all of their sales from this upcoming Bandcamp Friday to The Bail Project.

– Deathwish Inc. donated all of its webstore sales on Tuesday to the ActBlue community bail fund, split across 40 different bail funds in different cities.

– Tchornobog posted a long statement on Facebook to suggest that, instead of buying their music on Friday on Bandcamp, fans should donate money to racial justice or bail funds, in addition to contacting local representatives about addressing police brutality. “Be on the right side of history and let your outrage and disgust against inequality be known and fight it whenever you can,” they write. “Fuck the vast power unbalance in America and fuck racism.” (And of course credit to all the other bands or labels who donated or spoke out—which is a long list.)

I did too. I recommend you do so as well; here’s a place to get started. And I hope this is really just the beginning. Sure, metal is a complicated community where ignorance is occasionally celebrated as an “extreme” virtue, but it’s time those ideas went extinct. These bands are the ones we should be listening to, even when the music’s not playing.

The Best Metal Tracks of June 2020

There’s a lot of great old-school-style death metal being released lately that sometimes it feels a bit like comfort food. Which isn’t necessarily such a bad thing—I’m never going to complain about a few more orders of crispy, golden-brown french fries. But it’s worth remembering that there’s already a handful of bands who have a lock on the sound pioneered by Death, Morbid Angel, and some of the early Gothenburg bands. Bay Area outfit Necrot are one of them, and the first track from their upcoming album, Mortal, is everything a short, punchy and satisfying death metal song should be. Accelerated BPMs, sharp riffs, a direct attack, not to mention some straightforward but effective hooks. You’ll certainly find more intricate death metal tracks this year, more unconventional death metal tracks as well, but “Stench of Decay” just sounds great. Comfort food? Perhaps, but man is it addictive.

From Mortal, out August 28 via Tankcrimes

There’s been some buzz about Austin’s Skeleton for a while now, the up-and-coming group having been playing together since 2014 and landing on some high profile bills since then. So on some level, their upcoming self-titled 20 Buck Spin debut feels like a long time coming. If “Catacombs” is any indication, they’re ready for their damn closeup. The blackened crust-punk the group wields is steeped in drama and gothic flourishes, and any band that knows their way around a chorus pedal (do a control-F on these columns for “goth”) is going to have a special place in the spider-web-strewn cavern where my heart would be (just kidding, I’m a big sap and give hugs to people at shows when there’s not, you know, a pandemic). But “Catacombs” is mostly remarkable for how incredible it sounds without straying too far from a direct and immediate blast of black metal venom. The riffs are sharp and the aesthetic is dense and powerful, and throughout its 4:44 running time (66.6% of 6:66?), everything feels immensely satisfying. It’s perhaps just a brief glimpse of a dark sonic maelstrom to come, but the storm warning is enough to recommend you brace yourself.

I take great care not to go overboard on any one particular label around these parts—I don’t know how much attention everyone pays to that aspect of metal, but my instincts tell me “a lot.” Because if we obsess about metal, we obsess about the tastemaking, brand-name, symbol-of-quality aspect of it as well. And in the past couple years, no symbol of quality has been as much of a solid guarantee as 20 Buck Spin. So while I’ve made a point of not going overboard in clogging this space with everything the label releases, this month it’s getting highlighted twice, because they’ve got a hell of a summer planned. Bedsore is one such band in their repertoire right now that’s offering an innovative take on extreme metal that’s well worth following. In terms of influences from their home country, Bedsore are disciples of Argento-style giallo horror and Goblin’s eerie progressive rock, though it all comes together in a strange, surrealist black metal score. “The Gate, Closure” is as much about pageantry and grandeur as it is about ass-kicking, churning riffs, though it has all of this in spades, cramming a lot of ideas into a relatively brief three and a half minutes. But once it takes off, it’s old-school evil of the best kind. For a song so comparatively brief, it feels like a sprawling, epic journey, the kind that Blood Incantation offered on last year’s “Inner Paths (To Outer Space)” from their masterful Hidden History of the Human Race. Just a little shorter. Buncha showoffs.

From Hypnagogic Hallucinations, out July 24 via 20 Buck Spin

I don’t know that I ever consciously realized that an Inter Arma covers album—featuring their interpretation of tracks by the likes of Tom Petty, Ministry, even Prince—was a thing that I needed, but now that I am aware of it and it’s made its way to my ears, it’s an album I’ve come to truly cherish. Hearing familiar pop, alt-rock and classic rock songs interpreted through the lens of the epic, psychedelic sludge metal band from Richmond presents them in an entirely different light, one with an intensity that’s brought closer to the surface. “Southern Man” in particular feels relevant right now, Neil Young’s track from 50 years ago highlighting the history of racism in the U.S. (which, it should be noted, applies to the entire country, not simply the south—so a little unfairly directed but still apt). This led to a response from Lynyrd Skynyrd in the form of “Sweet Home Alabama,” as those with a rock ‘n’ roll history education will probably know, but given the protests in response to an unending epidemic of violence from police officers against Black Americans that have taken place over the weekend, the song’s message continues to resonate, and Inter Arma allow it to do so by cranking up the volume and the intensity. The band says they made the album, Garbers Days Revisited, simply because they thought it would be fun, and it is. But it feels like a much-needed form of heavy metal therapy as well.

From Garbers Days Revisited, out July 10 via Relapse

Depending on who you ask, Couch Slut are more of a noise rock band than a metal band, and similar things can be said of KEN Mode or Harvey Milk, each of whom has been featured on this page. So I’m not one to split hairs, and the new Couch Slut album is punishingly heavy regardless of where it stands. In fact, it’s one of the most intense pieces of music I’ve heard all year—though not inacessible by any means. The churning riffs of “The Mouthwash Years”—the opening track from the band’s newly released Take a Chance on Rock ‘n’ Roll, surprise dropped on the last Bandcamp Friday—have the similarly melodic but misanthropic sound of The Jesus Lizard and Pissed Jeans at their best. But neither band, no disrespect of course, has a vocalist like Megan Osztrosits, who has simply one of the most pissed-off screams I’ve ever heard, and given (gestures to all of this happening right now), it’s a highly motivating thing to hear right now. It’s been a long couple of months, and the next few are going to be even longer—let Couch Slut’s rage be your north star.

From Take A Chance on Rock ‘n’ Roll, out now via Gilead