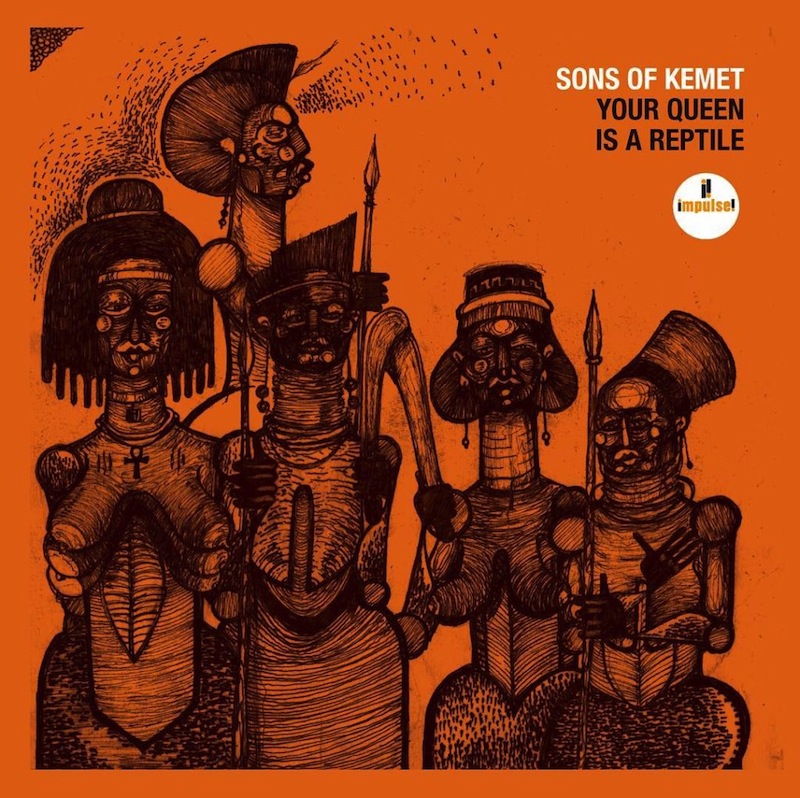 To understand where the future of jazz is, it’s best to follow where Shabaka Hutchings is going. Few figures in contemporary jazz have covered as much ground in such a short time as the Carribean-born, London-based saxophonist/clarinetist, who has performed with the likes of Radiohead’s Jonny Greenwood and Ethio-jazz pioneer Mulatu Astatke, and logged about six-dozen recording credits in the past nine years. As impressive as the volume of his work might be (including some of the best jazz records of the past couple years), it’s the vibrancy and versatility that’s made those credits worth chasing down, from the sprawling spiritual jazz of Shabaka and the Ancestors to the eschatological space jazz of The Comet is Coming, as well as having contributed to the short-lived, transcendent funk fusion project Yussef Kamaal. His musical world is an ever-expanding one.

The path Hutchings takes on Your Queen Is A Reptile, the third album by his Afro-Carribean jazz ensemble Sons of Kemet, involves taking a long journey through Black history. It’s the group’s first release for Impulse! Records, a label that changed the shape of music through groundbreaking releases from artists such as John Coltrane, Charles Mingus and Pharoah Sanders, and there’s a similar sense of boundless creativity in the nine tracks here. There’s also an activist spirit coursing throughout these tracks; the title of the album is a shot fired against the British monarchy (and perhaps Prime Minister Theresa May), “financed by taxes, which in turn validate the injustice of class and race discrimination in Great Britain,” as a statement accompanying the album states. And so Sons of Kemet offer an affront to the British figurehead by invoking the names of history-changing Black women from Harriet Tubman and Angela Davis to Hutchings’ own great-grandmother, Ada Eastman.

Your Queen Is A Reptile is a political album in a similar way to how Pharoah Sanders’ deeply spiritual early ’70s material was, not so much in the specifics of the issues it highlights but in the bigger, broader message it conveys. This is an album as much about Black joy and celebration as it is about decrying white patriarchy (taking shape as matriarchy). This is music that moves—like James Brown or Fela Kuti, whose lineage Sons of Kemet’s music is most certainly a part of. The furious soca beats of “My Queen is Harriet Tubman” provide a backdrop for some of the most intense and powerful music here, Hutchings’ blasts of saxophone a more abrasive counterpoint to Theon Cross’ bold tuba bassline. “My Queen Is Yaa Asantewaa,” named for a Ghanaian queen mother and anti-Colonialist, takes a more winding path to reach its climax, with a creeping psychedelic sensibility, while “My Queen Is Anna Julia Cooper” takes a more spacious approach, Hutchings’ saxophone playing dual role as both jarring backup instrument and serenely seductive lead. At any tempo or volume, Your Queen Is A Reptile compels the listener to action, most typically in a physical sense.

Yet when Your Queen shows its teeth in bookends “My Queen is Ada Eastman” and “My Queen Is Doreen Laurence,” Sons of Kemet balance out that joy and celebration with some pointed criticisms of the white supremacy that still plagues Britain and the world at large. Both tracks feature vocals from poet Joshua Idehen—in fact they’re the only ones to feature vocals—and when he unleashes a torrent of grime-like verses, it’s both energizing and intense. In closer “Doreen Laurence,” he opens with a direct statement: “Don’t wanna hear that racist claptrap!” Yet the opener is even more jarring, climaxing in the amazing takedown, “Fuck the Tories/Fuck the fascists/End of story/Fuck them all, and fuck ’em truly.”

There isn’t that much about Sons of Kemet that’s traditional, outside of the Black activist tradition they honor and build on—as well as the Impulse! Records lineage they’re now a part of. Yet outside of some key moments of Shabaka Hutchings’ other releases, Your Queen Is a Reptile has a unique sound built on contrasts and counterpoint, one whose influences are transparent but by no means cliche or obvious. It’s angry and inspirational, funky and furious, a jazz album that not only sounds of its time but reflects and blows back at the tumult in the world surrounding it. To quote another great jazz iconoclast: It’s a motherfucker.