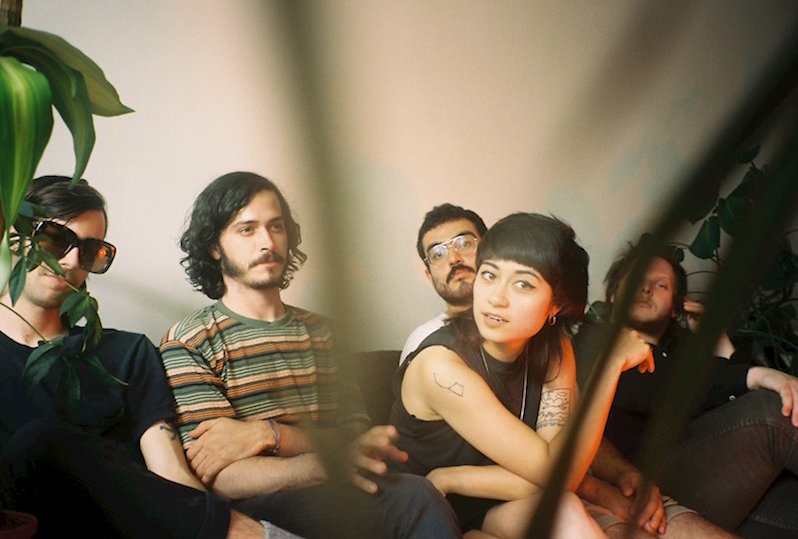 A late afternoon nap. Cool sheets, a cooler pillow. The window is cracked for the first time this year. Someone is vacuuming in the next room. White noise. The egg timer nests in the ball of half folded garb—an outfit soon to be repeated. 3:48: A muddled stream of thought leads to the cliff. “I don’t remember how we got here.” A loose rock, a quick twitch. Awake. The sun is shining. It’s been 6 minutes.

We’ve all been there: sleep deprived, tired from being wired, sit-kicking a classmate’s chair in seventh period physics. Spirit of the Beehive’s hypnic jerks is a titular homage to the highly theorized phenomenon—a sudden, involuntary spasm occuring between the stages of wakefulness and sleep. The album’s illusory temperament is swift and meandering, yielding a batch of wildly contrasting tracks, spliced and united through bassist Rivka Ravede’s fathers’ tape recordings. These loose transcripts and their vague conceptions path a series of seemingly unrelated events: a soundcheck, nana’s birdcages, an unexpected birthday party. Each tape simulates a sense of detached apathy, the kind often associated with bedheads trapped in a semiconscious twilight.

Hypnic jerks is a fever dream, sweat clean by its roaring title track and the plummeting “can i receive the contact?” There’s ripe déjà vu material between the final melodies of “(without you) in my pocket” and the remaining moments of “it’s gonna find you.” It’s quite similar to the feeling of remembering a dream in a state of wakefulness, wondering if it happened last night or last year. Each minute of hypnic jerks is a wink into the land of Nod, one gentle collapse into the arms of Morpheus. We spoke to Spirit of the Beehive guitarist and vocalist Zack Schwartz about the band’s creative process, his side projects and the making of hypnic jerks.

Treble: Hypnic jerks was originally supposed to be a tour tape/short mixtape, correct? When did you start to realize you were writing a proper album?

Zack Schwartz: Yeah. I guess probably within the first day or two of recording. We got the drums and bass done for about eight songs. Then I was like, “Well, I have these two other songs and we can just learn them quick and record them.” Those became “d.o.u.b.l.e.u.r.o.n.g.” and “monumental shame.” They weren’t ready but they sounded good when they were complete. And we figured the record was over 30 minutes, a full length at that point, so we added them on.

Treble: Hypnic jerks is singular. It does an incredible job at making the songs sound similar, yet distinguishable, though still cohesive. What helped drive this?

ZS: I think the samples really brought it together. I think without it, it would probably be a little confusing and out of nowhere. But I think the samples tether everything together into one piece, which is why it’s hard to pick singles for a record like that.

Treble: Right. It’s crazy to see the first single you released, “can I receive the contact,” out of context. It’s so different.

ZS: Yeah, I think we wanted to pick that one because it’s a short one and it’s kind of loud. People expect that from us. But most of the record is not like that. We’d rather start with off a bang.

ZS: No, I didn’t know they existed until after the songs were recorded. She was like, “Yeah, he sent me these tapes if you want to sift through them.” So I did. And I kind of made it this whole thing that it wasn’t before.

Treble: Did the band experiment with sleep/sleep cycles to influence this record?

ZS: No, not really. We recorded it in one week. I guess we didn’t get much sleep because we only had so much time. We had to get up early and go to bed late, so I guess we were pretty sleep deprived.

Treble: What’s your setup for live shows? Has it changed for this album?

ZS: Well we never really used electronics before. We were always a guitar rock band, which gets pretty boring if you aren’t doing it right. We use a lot of samplers and keyboards live. We’re starting to use backing tracks too so we can basically recreate all the songs on Ableton. Then we have stuff playing when we do it live. It’s really hard to get everything in time, especially when we play half our shows when our drummer doesn’t have a monitor. We’re trying to make it so we can play the way we want to no matter where we play, rather than relying on monitors. We’re trying to streamline everything.

Treble: You have talked about how you write lyrics instinctively. Were there any variables, internal or external, that helped shape the words of hypnic jerks?

ZS: If people take the lyrics to heart, I don’t want to make them feel disingenuous or not thought out. I don’t spend weeks figuring out what perfect words I want to say. Especially with this record, we didn’t have any lyrics or melodies until about the fifth day of recording. So it was a lot of listening to the bounces and thinking about the mood. We tried to write the words to fit the mood rather than the perfect words to describe something or put your heart on your sleeve too much. Which, no disrespect towards artists that are good at that, I appreciate that too. Sometimes I don’t think the words truly matter as much as the picture you paint.

Treble: Tell me about Mermaid Boy and Draag Me. “The Whole Time” rips.

ZS: Thanks, yea. I think I did [Mermaid Boy] when one of our members quit. We were all kind of in a bad mood and not sure if we wanted to continue. I recorded that album in a day. I didn’t think about that much stuff. I also didn’t have the equipment I have now, so it’s super grimy and recorded straight onto my computer, straight on to GarageBand. But with the Draag Me stuff, I’m trying to get better as a producer. Learning how to mix and master, make electronic music not boring. I’d like to incorporate that kind of vibe into newer Spirit stuff.

Treble: You and Rivka collaborate with visuals. Do you or any of the other band members have any other artistic mediums that inform Spirit’s music?

ZS: I think everyone has a special skill. Pat helps me a lot with some of the songwriting when it gets to the little things that matter like, how to complete a song or figuring out if a part is too long. Kyle is a genius at fixing guitars and equipment, he’s in school for it right now. Derek was in the band for a while, he’s a great producer. He’s not in the band anymore. Now we have Corey in the band, he’s also a great musician.

Treble: Is Spirit of the Beehive a visual band?

ZS: Definitely, yeah. I try to write cinematically and I’d love to have a constant visual aspect to the live shows, we’re just not there yet. But if we could figure out a way to do that, that would be cool.

Treble: What have you been listening to/reading/watching?

ZS: Toro y Moi. Daughters. Bunch of weird house music that my coworkers play. Detroit and Chicago stuff. The newer stuff is a bridge for getting into that and then diving deeper to find out where it came from.

Treble: What bands/labels should everyone be supporting right now?

ZS: I don’t have any specifics but anything that’s been said is “underrated” or “under the radar,” check those bands out. Get them on the radar, whatever that means. If that even matters to the bands or the artists or labels. Also, bands break up all the time. I’d say if you liked whatever band that was, it would be cool to keep up on whatever they do next because you might be missing out on some cool shit. There’s so many labels and bands trying hard and there are only a select few at the top.