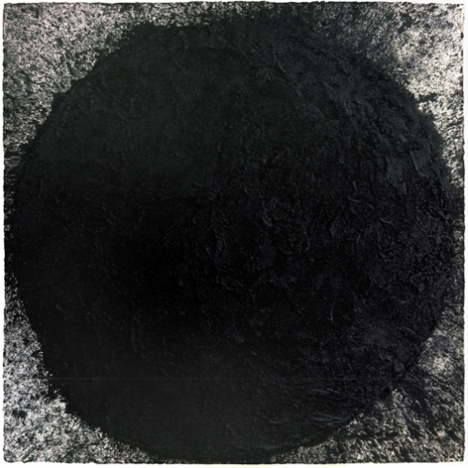 Identifying Sunn O))) as a metal band leads one to run the risk of only telling part of the story, and a limited one at that. A decade ago, when Stephen O’Malley and Greg Anderson released The Grimmrobe Demos, they were recording Earth-style slo-mo sludge, and as the band has progressed through the decade, that’s an element of their sound that remains unchanged. Yet their unholy, tectonic low-end movements have evolved toward more abstract spaces, as the band increasingly crept toward 20th century classical composition, jazz and avant garde music. This evolution has culminated in the group’s best and most ambitious work, Monoliths & Dimensions, a vast, 53-minute album with only four tracks; a sprawling work of art that doesn’t just penetrate your ears, but your pores and your marrow. Like the dark, hooded robes Sunn O))) dons during their live performances, Monoliths absolutely envelops the listener.

Monoliths & Dimensions offers sounds both foreign and familiar, built largely on the band’s murky, volcanic guitar drones; drones so heavy that even without the aid of additional instruments, the first five minutes of “Aghartha” are five of the most intensely heavy minutes you’re likely to ever experience. Yet that crushing drone soon gives way to more open space, as vocalist Atilla Csihar growls a barely audible poem. A piano pounds like an ominous series of devastating waves, while violist Eyvind Kang’s string arrangement turns the song from unease to sheer terror. And as the song plods toward its conclusion, two acoustic bassists are added, some aqueous sounds, and Julian Priester’s conch shell, which picks up nicely and strangely where guitars once dominated.

“Big Church” offers a completely different set of surprises, namely a female choir, whose presence lends a simultaneously angelic and frightening counterbalance to O’Malley and Anderson’s thunderous chords. The juxtaposition is immaculate, and absolutely beautiful, and, of course, deeply terrifying. “Hunting & Gathering (Cydonia)” is a bit more riff-driven, slowly marching with a clattering, intermittent percussion, a “man choir” and some bold splashes of horns, piercing through the rumble below with a majestic fanfare. Closing track “Alice,” in reference to Coltrane, is less crushing and more open in its cosmic, symphonic arrangement. It’s, quite frankly, one of the most breathtaking pieces of music this year, and an awe-inspiring tribute to the legendary jazz performer.

Sunn O))) isn’t really a metal band, certainly not in the traditional sense. On Monoliths & Dimensions, the drone lords have presented something far more expansive and less genre-bound. Still steeped in sludge and black metal, the band has merely used these elements as a jumping off point toward other new, brave and bold forms of music composition that show they have few, if any, peers.