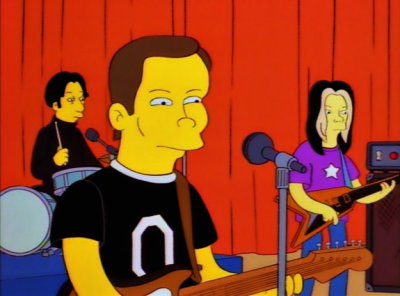 Billy Corgan didn’t need a swan song, or even a Zwan song. After smashing the Pumpkins for good (well, he had us going for a minute there) in 2000 he could have spent his rock emeritus years making y’know, soda-can robots, fending off oral candidiasis, and being otherwise dreadfully earnest. Not even dressing like a fakir and spouting shameless drivel, both of which he actually did, could make a song like “Thirty Three” shimmer any less. Corgan’s solo record was basically “The Punisher” except I kind of liked it. When he reconstituted the Pumpkins for Zeitgeist, it was obviously anything but. I’m trying to be nice here. But there’s this one song: “Bring The Light.” The lyrics are basically shit. But the drums switch on and off like the snick of an ignition, and pound like all hell. Guitar effects are finessed to their finest filigree one minute, blow up the room the next. At 2:10 there’s a solo so bonkers and buoyant it’s like sneaking up on the bane of all your days and cutting out its fucking digestive tract. In short “Bring The Light” is a kickass rock song, like they don’t make much anymore, or like Corgan doesn’t at least. No wonder it ends with a sigh.